Photo by Keith Sutton If brutish fights–and maybe a plate of fried fish and white beans–are your thing, then a... 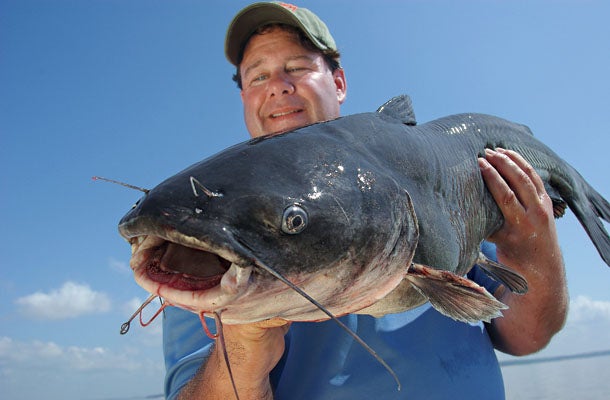 If brutish fights–and maybe a plate of fried fish and white beans–are your thing, then a trophy catfishing adventure up the Atlantic Coast is your road trip.

First Stop: Altamaha River, Georgia
Many Southern cat experts believe this river will give up the next world-record flathead. These cats spend most of their time skulking in heavy cover, but they are also voracious predators. Use 4- to 6-inch live bream on slip-sinker rigs around the edges of logjams.

Second Stop: Santee Cooper Lakes, South Carolina
Lakes Marion and Moultrie make up one of the best-known catfisheries in the country, especially for big blues. Winter is probably the best time to catch a giant, but midsummer is a close second. Blues, finished spawning by then, have retreated to major river channels where they have but one thing in mind: eating. Drift-fishing fresh-cut bait on the bottom is the preferred technique in these reservoirs.
**
Last Stop: Potomac River, Virginia**
While the James is the best-known blue cat river in the Chesapeake Bay area, the Potomac may be the more productive one. “For numbers of 30- to 70-­pounders, the James can’t touch it,” says Potomac River guide Josh Fitchett, who has seen two Maryland state-record blues pulled into his boat. “Late June and early July, after the spawn, produce the fastest action of the year, too.” Postspawn fish haven’t eaten in weeks, and they’re hungry. Big cats use channel edges and other structure to set up and feed in the tidal flows, and that structure is where you need to be fishing with a 6-inch chunk of fresh-cut gizzard shad.