Photos by Joe Cermele I’ve road-tripped to far-off places like Alaska, Montana, and the Florida Keys, but a few years... 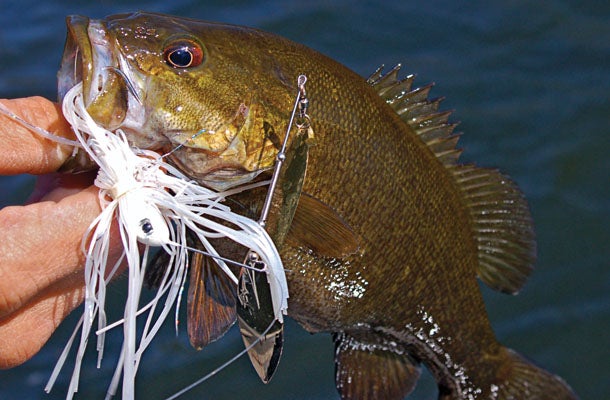 I’ve road-tripped to far-off places like Alaska, Montana, and the Florida Keys, but a few years ago I decided to stay closer to home in central Jersey. Growing up, I always considered the Delaware River to be my home water, but the truth is, beyond the familiar 6-mile stretch between Trenton and Titusville, the rest of the river was a mystery. So for five days, I ventured on a Delaware marathon with one goal in mind: to learn as much as I could about the river. Here are some notes from my trip, and the fishing lessons I took home.

Day One
Hancock, N.Y. My guide, Gary Henderson, and I had reached the junction pool where the West and East Branches of the Upper Delaware meet. As I whiffed cast after cast to the massive rising brown trout, Henderson mentioned that a few times each spring, some unlucky angler who managed to connect with one of these trout would have the fish ripped off the line by a striped bass.

Lesson Learned: Don’t be leery of hunting migrating fish farther upriver than you think they go. I always thought the stripers stopped 100 miles short of Hancock.

Day Two
Delaware Water Gap, Pa. The first thing Capt. John Brylinski said to me after shaking hands at the ramp was: “Man, you have to be crazy to try to catch a muskie here in April.” For the next five hours, we watched nothing follow or eat our jerkbaits in spots Brylinski said are killer in midsummer.

Lesson Learned: It’s simple, really: Don’t waste your time chasing a fish out of season. Figure out what species is most active, and target that.

Day Three
Easton, Pa. Given that the river is prone to flowing high and dirty in spring, I was glad to see it was running normal and clear when I met up with Capt. Blaine Mengel for a day of chasing smallmouths. Mengel, on the other hand, wasn’t so excited. By the end of the day we had worked very hard for just three bass.

Lesson Learned: High, dirty flows in spring make smallmouths much easier to find. They gravitate to the flooded banks, where they can be picked off with tubes.

Day Four
Lambertville, N.J. There’s a family in Lambertville that still has permission to net American shad in the river as a historical demonstration. During a break from crushing shad with Capt. Dieter Scheel, we watched the net get hauled. In one pass, which covered a mere 150 feet of river, the netters brought in three trout as by-catch. The smallest weighed probably 3 pounds. Given the number of stocked streams that empty into the Delaware, it makes sense that some trout would end up in the lower river.

Lesson Learned: That haul proved there are more trout in my home stretch than I once believed, and that even if a river seems too warm or inhospitable to trout, don’t rule out the chance of hooking a stray toad.

Day Five
Trenton, N.J. Within five minutes of my free-lining a live herring in the tidal zone at Trenton, a striper smacked my bait with its tail. Even though the herring still had plenty of life, Capt. Eric Kerber told me to switch it for a fresh one. He swore that no striper would touch a herring that was missing even a few scales. I kept the bait in to prove him wrong, but it went untouched. After rerigging with a fresh livie, I got a bite within minutes.

Lesson Learned: It’s since become illegal to possess herring on the Delaware River, but the experience made me put stock in casting only the most detailed, realistic plugs and swimbaits.