Photos by Alberto Knie Among the many beaches throughout the Northeast where surf casters hunt migrating striped bass in spring... 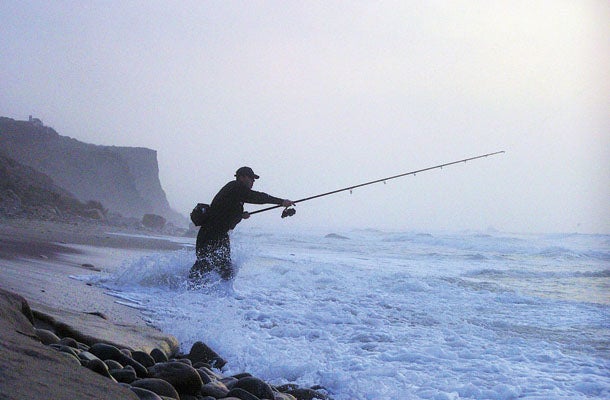 Among the many beaches throughout the Northeast where surf casters hunt migrating striped bass in spring and early summer and again in fall are a few towns so steeped in surf-fishing lore, they’ve become hallowed grounds for striper nuts. If you’ve got a week, you can fish them all in one trip.

First Stop: Bourne, Mass.
Fierce currents rip through the Cape Cod Canal at Bourne, overwhelming baitfish and providing easy pickings for big striped bass. Local fishermen rig bikes with PVC rod holders and pedal along the service road that runs the length of the Canal, scanning the waters for feeding bass and fleeing baitfish. Anglers fishing the Canal are also within striking distance of some of Cape Cod’s other classic surf-casting spots, like Race Point and Nauset Beach.

Second Stop: Cuttyhunk Island, Mass.
Big stripers return to Cuttyhunk Island each spring. You can’t bring your car to the island, so leave it in New Bedford and take the ferry across Buzzards Bay. Once there, you can reach everything on foot. In fact, the island is small enough that an ambitious angler can fish its entire shoreline in one night, starting at Canapitsit Channel and ending at the mouth of Cuttyhunk Harbor.

Third Stop: Block Island, R.I.
Big schools of cow stripers spend summer in the cool waters off Block Island. After dark, these bass patrol the shoreline, where surf casters throw live eels and large plugs. Block Island is big enough that bringing a vehicle over on the ferry is helpful but not necessary. Visiting surf casters have been known to use taxis to drop them off at promising locations.

Strong currents off the east end of Long Island trap baitfish and make Montauk Point a favorite pit stop for southbound striped bass. The waters under Montauk Light simmer with blitzing bass, and fishermen cast bucktail jigs and popping plugs into the melee. Paulie’s Tackle on Edgemere Street is the heart of Montauk’s surf-casting scene.

Last Stop: Seaside Park, N.J.
Migrating stripers feed along the sandbars and troughs that span Island Beach State Park, just south of Seaside Park. You can get three-day or season-long permits to drive on the sand, granting access to 9 miles of undeveloped beach. Swing by Betty and Nick’s, the last tackle shop in town before entering the park, for a dozen surf clams and a fresh pork roll and egg sandwich.