I, Muskie Hunter: Understanding the Insanity That Comes With Living For Muskies

Photo by Nathan Kirkman If you call yourself a muskie fisherman, the question is not if you’re nuts, but how... 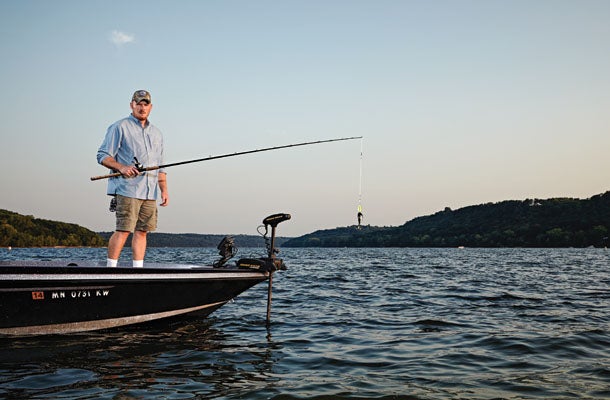 If you call yourself a muskie fisherman, the question is not if you’re nuts, but how nuts? Tackle-shop owner Josh Stevenson (mighty​musky.​com) is one of the best muskie hunters and most sought-after guides in Minnesota. During the state’s 2013 183-day muskie season, he spent 176 days on the water, about 15 hours a day working, and about two waking hours a day at home with his family. He had an estimated 200-plus follows, had 26 fish come unglued, and put 140 muskies in the boat, including a personal-best monster. Five rods were broken, 40 expensive lures were lost, six trips were cancelled between weather and getting stiffed by clients, and one visit was made to the emergency room.

To truly understand the insanity that comes with living for and by muskies, F&S asked Stevenson to keep a fishing journal from opening day 2013 to the last launch of the season. Here are the highlights…and lowlights. —Joe Cermele

May 25, St. Croix River
It is freezing. The end of May and half of the lakes in Minnesota are still iced over. This morning, I drove 15 miles downriver to put in, and with eight other boats waiting to launch behind me, my boat battery died and wouldn’t take a jump. I drive another half hour and drop $150 on a new one. Then I run back to the river, finally launch, and fish all day. I didn’t plan to see much given the cold, but I did have one muskie swipe at my bait in the shallows. It was a tough opening weekend on the Wisconsin border water, but at least there was a sign of life.

May 28, Twin Cities Metro Area Lake
The inland Minnesota muskie season doesn’t open for four more days, but I had to shake the dust off and just catch something. So I went on a pike hunt. With the water being so frigid, I couldn’t get them to eat any lures. I switched to live minnows and fished deep. I scored a few 10-pounders and kept their holding depth in mind for upcoming muskie trips. It’s been such a long winter that it felt awesome to bend a rod.

After a few fun days of catching muskies on Lake St. Clair with some buddies, it was time for the main event, the real reason I flew to Michigan. Tonight I managed to push to the front row of the Metallica show at the Orion Music Festival. I consider myself a superfan, a “Metallica Wolf.” Seeing them is like a form of going to church for me. My crowning achievement of fandom was meeting singer James Hetfield.

June 20, St. Croix River
Last night my client for this morning cancelled. He also expected me to return his nonrefundable deposit. Fishing all alone, I landed one muskie, missed another, and had one follow. They could have been this guy’s fish.

June 21, St. Croix River
Tonight they were predicting a massive storm. I was launching the boat with only two hours of light left when a cop pulled up and advised me not to go fishing because of the pending weather. I said, “I know the situation, but muskies generally bite before these big storms.” He thought I was nuts but said he couldn’t stop me.

July 8, St. Croix River
Today I guided a really nice older couple. We had prime morning conditions–low light and a low ceiling–but I spent the first 45 minutes teaching them how to cast. They got it down pretty fast, and we were having a great time. They had several follows and connected with a couple fish, but the gentleman had back problems and couldn’t cast for more than 10 minutes at a time. Eventually they both got tired, but they didn’t want to go in. I think they were more interested in the muskie experience and less worried about catching fish. I hooked three muskies while they were resting.

July 12, Twin Cities Metro Area Lake
Superstrong south wind today, gusting to 35 mph. Despite that, I caught a 45-incher on my fifth cast with a Rabid Squirrel bucktail throwing behind my two clients. By the time we got roasted off the water at midday we had six fish to the boat, three of which we landed. These guys had great attitudes and really enjoyed the day. People like them inspire me to keep guiding.

The 46-inch albino muskie my client caught three days ago has sparked lots of talk in the fishing world. I got a kick out of all the people claiming they had seen that fish before I did. The story appeared on a local TV news station, in the Pioneer Press, and in the Star Tribune. I had no idea the catch would create so much publicity. The media outlets are calling it “The Ghost Fish of the Twin Cities.”

July 25, St. Croix River
My clients didn’t agree to my 5 a.m. start time. They wanted to meet at 7 a.m., which turned into 8:30. They also made me waste 45 minutes driving around and picking them up instead of meeting at the ramp. By the end of the day they’d polished off an 18-pack of beer and a bottle of Canadian Windsor. It was more a boat ride than anything. The fishing didn’t seem to matter to them.
**
July 26, St. Croix River**
My two clients from Mexico seemed more into taking pictures than fishing when we first set out. One of them made about four casts, then fell asleep. His friend kept going, made about seven casts, and scored a 48-inch muskie on a topwater Whopper Plopper, screaming “mooskie” all through the fight. Talk about lucky. Despite a slightly rocky start, I was super happy for him. He said he plans to get a replica mount.

July 27, Mille Lacs Lake
Staring at the water for days on end is really getting to me. The sun’s reflection is making my eyes hurt.

August: Hang in There, Baby

Our second daughter, Emma, was born today. Good thing I wasn’t guiding, because my wife Laura’s contractions started at 6 a.m., we got to the hospital at 7:30 a.m., and Emma was born at 7:56 a.m. The very best catches of my life are my wife and two beautiful daughters.

Aug. 14, St. Croix River
I counted eight muskies lying in shallow, sandy areas this morning. None of them would bite. They ranged from 45 to 52 inches long, lined up like wolves waiting to attack, but they just wouldn’t move.

Aug. 18, Oakdale, Minn.
On the way to meet my client, my truck broke down–cylinders misfiring, engine malfunction, had to pull off the highway. Found out it would cost $1,500 to fix.

Aug. 22, St. Croix River
Ten minutes into the morning, my client hooked a giant fish. I estimated 54 inches. He fought it around the boat so we could see it, had a good game of tug-o’-war going, and then the fish jumped and spit the lure. We got gut punched. The discussion for the rest of the trip circled around whether it was better to have hooked it and lost it or not to have seen it at all.

Sept. 4, Hudson, Wis.
Dreamt I’d been teleported to another galaxy and was the first person ever trying to hook a muskie in a river of lava.

One of my clients hooked a big northern on a Suick jerkbait. As I was trying to get the hooks out, the fish jumped and threw one treble deep into my finger. The other two were still in its mouth. My clients held the fish while I cut the hooks off. I wanted to go back out after the ER visit, but the guys declined. They’d had enough excitement and seen enough blood for one day.

Oct. 17, Twin Cities Metro Area Lake
My client today really wanted to chase tiger muskies, so I took him to one of my favorite lakes that’s loaded with them. It worked out. He got one, and I must admit, I was really happy we went on a tiger quest. It reminded me of chasing them as a kid. My mom, despite working two jobs, would take me to the lakes and pick me up whenever I wanted. I really owe her more than anyone for fueling my passion for fishing.

Oct. 27, Hudson, Wis.
One week ago I fished with a guy in his mid 20s. He was very introverted but eager to learn how to target muskies because he’d never caught one. It was a bit awkward at first because he didn’t talk, but I could tell he was soaking in everything I was doing. I moved into a prime spot and all of a sudden he shouts, “There’s a fish coming!” I saw an easy 50-incher following his bait. It spun around twice in the figure eight, but it never bit. But he was so thrilled he didn’t stop talking for the rest of the trip. Today I got an e-mail from him. He caught a 48-inch muskie on his own, using a borrowed boat and the tactics I showed him. He was so excited and gave me all the credit for his catch. It means a lot to me.

It was a monster. I could tell by the way it fought. My clients turned to me and said, “Oh my gosh, Josh! What do you have? This is awesome!” I remember tapping one of the guys on his shoulder and asking him if this moment was real. I will never forget the disbelief I felt looking at it in the net. It had been a frustrating morning, including a nasty ride in horrible conditions that soaked my clients and me. But looking down at this huge fish, all of that went away in a flash. It measured 56 inches with a 27-inch girth. That’s the biggest muskie I’ve ever caught in my life.

Nov. 7, Mille Lacs Lake
I knew we had to get going, as conditions were getting dangerous. The wind started whipping, and it was getting dark fast. I was driving the boat about half throttle when boom! We speared a big wave of 32-degree water. It felt like we got into a car accident. The impact blew apart my trolling motor. All of our tackle and gear was pushed to the back of the boat. My clients had both been blasted back toward me and were hooked up in loose lures that went flying. It was one of the scariest moments of my guiding career.

Nov. 13, Twin Cities Metro Area Lake
The two novice muskie fishermen, Doug and Martin, made it clear they didn’t have any expectations considering how cold it’s gotten. They seemed to understand the game. Even though most muskie guides have quit for the season, I decided to take them. Within the first hour of trolling, Doug put a 52 1⁄2-inch fish in the boat. That was the biggest fish a client caught all year, so I couldn’t have been more ecstatic. What better way to end the season? Five hours later, right at moonrise, Martin was working a glide bait super slowly and got nailed. His muskie measured 51 1⁄2 inches. At this point I felt like I was dreaming. We released the giant, and Doug fired back out with a glide bait. Minutes later, bam! When I sunk the net around this muskie, I knew I was looking at a third 50-plus-incher. It turned out to measure exactly 51. How we managed three fish that size–none of which came off during the fight–is mind-blowing. This was the best trip of my 20-year guiding career. I expect within the next few days, the lakes will ice over.

Here are the 5 lures that caught more muskies in 2013 than any others in Stevenson’s arsenal.