Package Deal: The Story Behind One Reader’s Secret Bass Bait

Photo by Luke Nilsson A lot of lures hit my desk. Most come from the huge companies wanting to show... 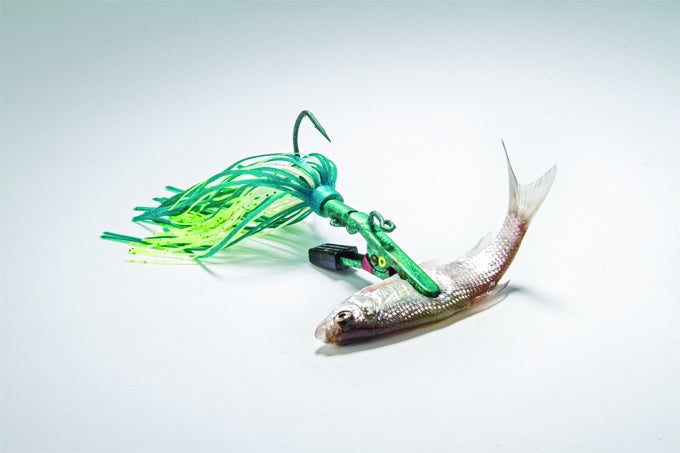 A lot of lures hit my desk. Most come from the huge companies wanting to show off their latest designs, or from small shops hoping to catch their big break.

Many of them are smart and innovative—but none are as genius as the package of homemade jigs I received this spring from an 82-year-old retired Missouri farmer. Howard Dickey included a letter with his lures, and his reason for sending them wasn’t fame or money.

“I was hoping you might write an article about my lures,” he wrote, “just to capture the imagination of fellow bass fishermen.”

They certainly captured mine, so I called Dickey for the story. Using electrical solder, Dickey attaches a 1/0 weighted wide-gap worm hook to a small alligator clip. He paints the clip—sometimes adding stick-on eyes—and finishes the lure with a rubber skirt. The creation resembles a jig, but its brilliance rests in the clip: Dickey pins a live shiner, worm, crayfish, or soft-plastic lure crossways in the clip’s mouth.

Underwater, the whole package mimics a predator eating prey, and according to Dickey it makes big, territorial bass really mad.

“I used to walk along the strip pits early in the morning and watch the way bass fed in the shallows,” Dickey told me. “What I figured out is that if something swims into a bass’s territory and takes away its food, it attacks.”

Dickey claims his jigs get bass so fired up that when they strike, they nearly rip the rod out of his hands.

“I’ve lost two rods over the years. I’ve learned to anticipate the strike and hold on tight.”

A live shiner wriggling in the clip’s jaws is Dickey’s top producer—especially when he fishes the jig below a cork—but he’s also had success working the lure more aggressively with soft-plastic worms and shad, as well as nightcrawlers. To keep the clip from squishing live worms, Dickey threads a small piece of a clear drinking straw onto the bait’s midsection for clipping it into place. Dickey made his first alligator-clip jig in 1962, and the lure currently resides in only about seven tackle boxes in the country.

Or I guess eight if you count mine. I plan on making my own, though, because I genuinely believe they’ll catch big bass this summer. And because I’d feel terrible if I lost any of my Howard Dickey originals.