By: Joe Cermele, Mark Modoski, and Dave Wolak; Illustration by: Paul Shipper When it comes to summer strikes, no lure... 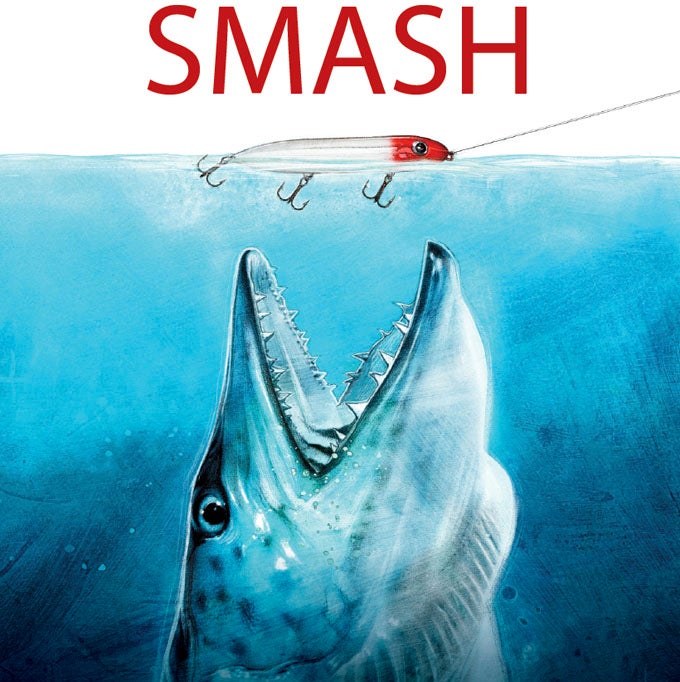 When it comes to summer strikes, no lure delivers more blockbuster thrills than a topwater. Here are the tactics and tackle you need to attract bass, trout, pike, and muskies, to the surface for explosive fishing.

Tweak a mouse fly to fool a carnivorous summer brownie

Every flyfisherman dreams of catching a big trout on a mouse pattern, but when the water is boiling during a summer hatch, the last thing you want to tie on is a rodent. If you can stay up late, the dead of a hot summer night is prime time to strip a mouse. There isn’t much mystery in where to cast: parallel to the bank in slow water, against logjams and boulders, or across the tailouts of long glide pools. But what do you do once Mickey gets slammed?

According to guide Brandon Alexander, who fishes the Delaware River in New York, sometimes you see the hit, sometimes you don’t. You’re mostly going to hear and feel the strike, and the feel is the important part. Alexander has seen browns knock a mouse 3 feet in the air. If you were to set on sound alone, that fly would smack you in the face. Wait until you feel weight on the line before you swing.

A large portion of hits on mice are actually trout nipping at the wiggling tail, says Alexander. This is especially true of smaller trout, but that’s not to say a toad won’t hit the hind end on occasion. To thwart short strikes, Alex-ander ties small stinger hooks into his mouse tails. If you buy yours pretied, a drop of superglue and a piece of braided line connecting the stinger to the bend in the hook shank should do the trick.

Rig a frog for battle with pike in the pads

Bass aren’t the only fish that use lilies for summer cover and gobble up frantic frogs. If you’ve got pike and you’ve got pads, you’ve got the makings of epic topwater explosions. Of course, you don’t want to toss an $8 hollow-body frog , because one pike chomp and that lure’s a goner. A pack of soft-plastic frogs with kicking legs will cost you less money and won’t hurt as much to destroy. But before you fire away, you’ve got to get them ready for war.

Start by tying a 1-foot length of 65-pound fluorocarbon leader to a 1/0 wide-gap worm hook. Tie the end of the leader to one side of a barrel swivel and the main line to the other. Thread the frog onto the hook so the eye is completely hidden in the bait, and the point is exposed on the back.

Cast the frog into the lilies and retrieve with the rod tip high, just fast enough to keep the frog gurgling across the surface and sliding over the pads. All you have to do now is brace for serious impact.

There’s a reason why lures with erratic actions catch bass: Live prey doesn’t swim in a straight line when it’s getting chased, so the more a lure darts and changes course, the more natural it looks. Buzzbaits, however, are designed to run in a straight line, and because they sink when paused, imparting a jerky action isn’t easy. But it can be done. The trick is a method I call skimming—which is a scaled-down version of jigger poling—that is particularly lethal when bass are hunkered down in thick lily pads. Skimming works best from a pedal-drive kayak, but any boat with an electric trolling motor that lets you sit low to the water, such as a johnboat, will do. Make sure you run the motor at a low speed to keep the noise down.

You can skim with any rod, but the longer the better. A 7 1⁄2- to 8-foot flipping or cranking rod—something with backbone—is ideal. Pair it with a baitcaster spooled with 20-pound braid, and tie your favorite buzzbait directly to the main line.

Slide your boat or kayak right up to pads and cruise tight to the edge. You can also creep through open lanes within the lilies. With the buzzbait dangling 8 inches from the rod tip, drop it in the water and whip the rod back and forth just above the surface. Get the lure skimming fast, and make it change directions constantly.

Strikes will be vicious, and with hardly any line out, a forceful set will only pull the hook; just give the tip a quick upward pop. If it’s a big fish, pay out a little line so you can get better control of the bass.

Use tiny topwaters to draw up not-so-small smallmouths

In late summer, when the water in my local streams and rivers is low, I ditch the larger Spooks and Jitterbugs that were catching smallmouths earlier in the year and switch to tiny poppers. Measuring just 2 inches, Matzuo’s Nano Popper is my favorite because it still has a deeply cupped mouth despite its size. I scale down from my traditional smallie outfit to a light 7-foot trout spinning rig with 6-pound-test mono. The lighter tackle allows for less intrusive presentations in low water and a more seductive action than you can easily achieve with a heavier rod and line.

Because these poppers don’t hit the water hard, you can cast them right to tight holding areas, such as the pocket behind a lone boulder or a short seam off the main current. When the lure lands, you want to have as much of the line off the water and as little slack as possible. To achieve this, I hold the rod tip high like I would while drifting bait.

Resist the urge to pop the lure hard right away. Instead, twitch it gently in the prime zone a few times. You’re trying to mimic a small baitfish that’s flicking on the surface, unaware of pending danger. Give the lure a few hard pops as it gets pulled out of the zone into current.

Trout rods are often slow, so remember to let the rod load before you set. Otherwise, you risk pulling the popper out of the fish’s mouth.

How to Pick the Right Foam Fly for Any Popping Situation

A: Cupped
Cupped heads excel in quiet still waters. The deeper the cupped mouth, the louder the bloop it makes.

B: Reverse
This style is great when you want a subtler still-water presentation or need less resistance in fast water.

D: Flat
This head throws a lot of water with little resistance, making it ideal in ripping currents. .

What Do You Really Get from a Custom Topwater Rod?

Your favorite do-it-all rod can capably cast surface lures all day. But more and more companies are taking bass fishing to the next level with specialty topwater rods. Consider the G. Loomis IMX Top Water, for example. According to David Brinkerhoff, the design engineering manager at G. Loomis, the rod features three different tapers, all of which play a specific role in the topwater process: “The first 6 inches are stiff to help you achieve a quicker, more erratic action. The midsection has more give to help sink treble hooks. Then you’ve got a powerful butt to get fish out of heavy cover.” Unique guide spacing also helps you cast as far as possible, which is important for covering water. I’ve fished dedicated topwater rods, and if surface action is your addiction, you’ll feel the difference after just a few trips.

When to Pop, Walk, Spin, or Buzz for Largemouth Bass

Buzz: Tie on a buzzbait when you need to cover lots of water on expansive mud or rock flats, around large grassbeds, and through big stump or pad fields where bites can come from anywhere.

Pop: If you’re targeting lone bass around isolated cover, such as logs, stumps, bushes, or grass clumps, use a popper. Many bites will occur when the bait is sitting still. A fluorocarbon leader pulls the nose down to help create even louder pops on the twitch.

Spin: Prop baits produce a nice buzz when they’re moving, but they also work at rest. They’re a terrific choice in late summer for fishing around bream beds or pitching to defined holes within grassbeds.

Walk: Use walking baits—like a Spook—over expansive flats and submerged grass, periodically stopping them over any visible holes in the vegetation. If you find schooling largemouths chasing bait in deeper water, a walking bait should be the first lure you grab out of your tackle box. —Dave Wolak

When to Plop, Glide, Buzz, or Creep for Muskellunge

Plop: Prop baits excel in choppy or stained water and at night. Pull them with a straight retrieve over emerging weedbeds and around rocks and logs. Speed up in rough water, and slow down at night.

Glide: Since glide baits require a little more savvy to work and make less noise than other topwaters, they’re best suited for calm, clear water. Most have exposed trebles, so they’re not for heavy cover.

Buzz: Most muskie buzzbaits are weedless, so they can be worked fast in thick cover. They’re productive at night and in low-light conditions, but don’t be afraid to clip one on during bright days.

Creep: The wobbling action and gurgling sound of creeper baits is perfect for calling fish in choppy or murky water. Retrieving them slowly at night gives fish time to zero in and ­attack. —Mark Modoski