Kings of September: 4 Pros on How to Catch Monster Chinooks 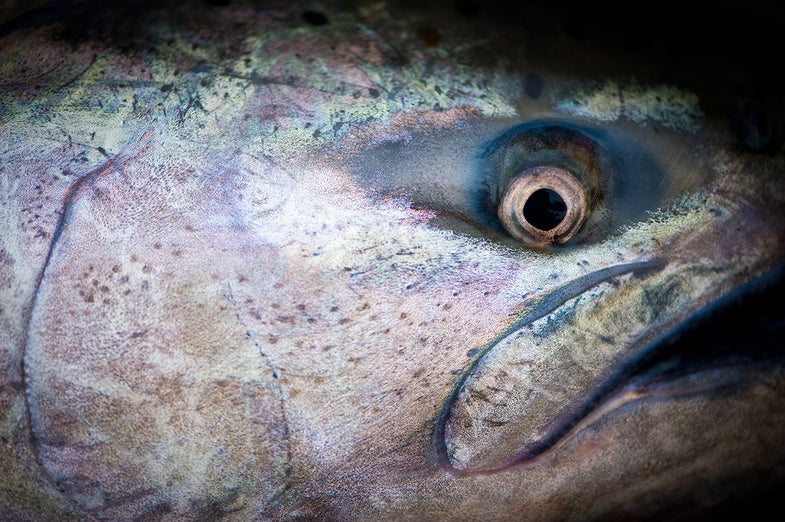 Muskie hunters cherish June. Striper fishermen adore October. But for the legions of anglers that chase chinook salmon in and around the Great Lakes, there is only September. This month, as giant kings move into rivers to spawn, they’re at their most aggressive, and although the majority have lost their urge to feed, nothing ticks them off more than a plug, spoon, spawn sack, or fly dancing in their face while they’re trying to get busy. You can wet a line with the crowd and maybe luck into a monster. Or you can seek the same conditions that these diehard salmon guides do. You can tie on their favorite lures, flies, and baits; use their presentation tricks and tips for winning the fight; and have your top shot at a personal-best chinook.

Co-owner of Kinn’s Sport Fishing, one of the oldest guide operations in Wisconsin on Lake Michigan, Mattson oversees an 11-boat charter fleet and knows big-water trolling inside and out.

Prime Conditions
“I want a southeast wind to stir up the shoreline and stain the water,” says Mattson. “Otherwise our boats can spook fish. Rain is a plus, too. The kings can smell that surge of freshwater flowing into the lake, and it draws them right to the mouth, where we troll for them.”

Top Producer
“Early in September, a simple silver spoon catches the most big kings for me. It’s a great alewife imitation, and when the fish start staging at the river mouth, some still have the urge to feed. Once they stop eating, you just have to make them mad, and a Mauler 500 spoon from Howie’s Tackle becomes my go-to.”

Presentation Skill
“I start trolling at around 1.8 knots and often find that fish hit on the fast side of the boat during a turn. That quick increase in speed draws the strike. If that’s happening a lot, I’ll pick up to 2.3 knots.”

The Right Fight
“Keep your drag loose. Kings’ mouths harden for the spawn, and if your drag is too tight, you’ll bust off or straighten the hook.”

Kessler is an ace at drifting natural baits by boat to the kings that flood into the mighty Niagara River every fall from Lake Ontario.

Prime Conditions
“The biggest fish run up first, so I pray for a cool start to September with lots of rain. Wind and runoff churn Lake Erie above, and the river turns a milky, emerald green; if water temps are in the 60s, everything is perfect.”

Top Producer
“Drifting chunks of salmon skein along the bottom is our main game, and I dye my eggs to match the conditions. In clear water, I like pink to light-red eggs. In stained, I go dark red or deep orange. Bait size matters, too: nickel-size chunks in clear water, half-dollar-size in stained.”

Presentation Skill
“We bounce skein on three-way rigs with pencil weights and 6-foot fluorocarbon leaders. If the bait is moving faster than the current, it looks unnatural and won’t get picked up by as many fish. An electric trolling motor is key to matching bait speed with the flow.”

A young gun on the salmon scene, Keene fishes both Lake Michigan and the lower Manistee River, specializing in trolling and shallow-water baitfishing.

Prime Conditions
“I look for water temperatures from 47 to 52 degrees in early September. Lake Michigan usually turns over around Labor Day, and more than anything else, it’s that cold water that triggers big fish to move to the rivers.”

Top Producer
“Dreamweaver’s Captain’s Choice cut plug in Super Green pulled behind a flasher is a big-king killer. There’s something about the glow that gets them to hit. It’s also a large bait that swims erratically, which is key to getting these fish to react.”

Presentation Skill
“When I mark fish, I make my first pass at about 2.2 knots. But if they’re not hitting, it’s time to trigger the bite. I rip those plugs over them again at 3.5 knots to make them lash out.”

The Right Fight
“When the fish gets close, don’t reach out with the net. If you bump the line or the fish, it could be over. Instead, the captain should slow the boat to a crawl, and the angler should slowly lift the rod, drawing the fish smoothly into the net.”

Glazier has been fishing the Salmon River for nearly 30 years and is a pro at finding heavyweight kings on the fly, even when anglers are shoulder-to-shoulder on the water.

Prime Conditions
“I want higher flows in September because we catch the biggest salmon in faster water. A fish in current has less time to inspect the fly and is more likely to pounce. Funny thing is, most people gravitate to the slow pools where salmon stack up, but that’s tougher fishing.”

Top Producer
“Hot colors change daily, if not hourly, here. The best thing you can do is change patterns frequently, but I am a big fan of Woolly Buggers that incorporate a copper beadhead, copper wire, or copper flash in the tail. There’s something about that color that seems to draw strikes under all conditions.”

Presentation Skill
“If you see a salmon move out of the way of your fly, scale your leader back by 2 pounds. I usually start with 12-pound fluorocarbon and drop to 8 at the lightest.”

The Right Fight
“Move when you hook a king. You can’t stand there and expect to bring it back. Also, learn exactly how much heat you can put on your rod without breaking it.”