The first tarpon of the night hits on Ross Gallagher‘s first cast. He’s telling us that he sometimes turns off... 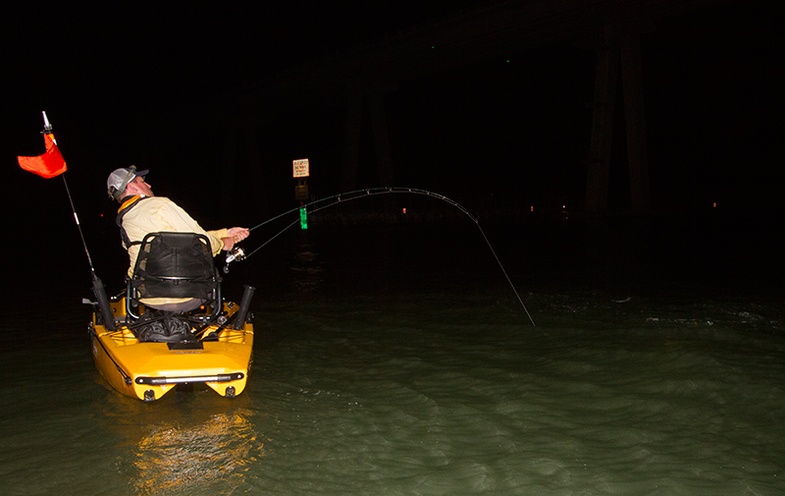 The first tarpon of the night hits on Ross Gallagher‘s first cast. He’s telling us that he sometimes turns off his kayak lights to hide from other anglers when he stops in mid-sentence to throw a backhanded lob over his shoulder. He pops the rod once. The water explodes. “Feels like an eighty pounder!” he screams as he’s towed out into the darkness.

Gallagher is a big-fish junkie who goes out in kayaks, often by himself, to fish bridges on the Florida Gulf Coast for tarpon, snook, and grouper. I had the chance to fish one with him near Captiva Island in May of this year.

These bridges are no joke, especially at night. Currents can be fierce. Winds sudden. Bull sharks and hammerheads cruise beneath the surface. “Not too many people will do this with me,” he told me as we were pedaling out to his spot.

The First Cast Curse
Gallagher is gone. There are three of us fishing with him, but it’s our first time out for tarpon, and since he’s our unofficial guide we’re left to figure things out on our own. We scout while we wait for him to come back, pedaling through the pilings and stemming the incoming tide. The uptide sides of each piling are difficult to fish, but there are eddies in their lees that let us hold position without having to pedal so hard.

This is a big bridge, so we separate to cover more water. The pilings are 40 yards apart, wide concrete pillars that soar into the darkness like columns in a cathedral. We cast at their shadow lines. Night herons watch us from the bridge abutments.

Forty minutes later Gallagher returns. He slides into my eddy. “It shook the hook,” he says. He shrugs. It happens.

Now that he’s back he can show us his technique. We’re fishing heavy spinning gear rigged with braid, fluorocarbon leaders, and long, skinny swimbaits threaded onto 1-ounce jigs. The trick, Gallagher says, is to loft these upcurrent of where you’ve seen or heard a fish. Count down your depth and bounce it through the water column. Stay centered in your boat. You will need leverage when its time to set the hook.

The breeze picks up. This isn’t easy fishing. For two hours we cast at nothing, wearing out our arms on Gallagher’s heavy tackle and pedaling constantly to hold position. “It’s like this sometimes,” he says, pedaling close enough to talk. “You have to be patient. A lot of people won’t wait out the bite.”

Epic Battle
At three hours in the wind lays down again and the night gets quiet. Casting makes noise, so I take a break to listen for feeding fish. Waves slap the bridge pilings, building an echo that hollows out the darkness. The tide starts to slow and a full moon peeks from behind the clouds. In the extra light I catch a gleam of white water and hear a soft splash. Gallagher’s voice is a whispered shout. “I’ve got one porpoising over here!”

The pod we’ve found is gulping clouds of tiny pilchards, sliding back and forth in the space between two concrete abutments. We kick to get below them, facing into the tide and trying to guess where they’re holding, and at what depth.

The full moon has them scattered, so it takes a while, but one finally rolls above me. I fire out a cast, count down to six, then engage the reel. On my third pop the line stops dead, like I’ve snagged a heavy boulder. I haul back and strike. The fish bucks hard, then takes off toward the bridge. The line starts rising toward the surface.

Don’t Tip Over: Big, stable kayaks like Hobie Pro Anglers are required equipment for this kind of fishing.

The tarpon jumps, two full leaps toward the nearest concrete piling. I palm the spool, desperate to turn him. “Get his head around!” Gallagher shouts. “Let him tow you out of here!”

I twist in my seat, crank the rudder over and pump my pedals, dropping the rod and letting the kayak sweep around. The fish comes with me, carving an arc in the water. We pick up speed as the line straightens out down tide.

The kayak builds a bow wave. Gallagher keeps his drags cranked tight. “The less line out, the more you control,” he tells me. The fish runs for 10 minutes, then dives. I lean into the weight, cranking the kayak in closer. The rod bends in half, flexing deep into the handle.

When the fish gives up it comes up fast, leaping right next to my boat. Its eye is level with mine, gill plates flared and clattering in the light of my headlamp. It shakes its head, spray and scales in a silver spotlight. I am covered in water, but the hook stays buried in its jaw. After two more jumps the fight is over.

The bite stays hot for another hour. I catch two more fish, another on black and one on green. At 3:30 am Gallagher calls it a night. By the time we reach the ramp the dew has started settling. Two guys with cast nets are launching their skiffs. Gallagher sees me looking at them. “Tarpon guides,” he says. “Going out to get bait.”

If You Go
Captiva Island is a great place to fish with a kayak. The beach-front town sits a mile north of the J.N “Ding” Darling National Wildlife Refuge. This refuge offers excellent birdwatching, particularly for kayakers. Paddle a maze of mangrove islands and heron rookeries while firing Spooks into the roots for snook. Bring your family. The protected Calusa Blueway Trail and no-wake zones throughout the area give beginners access to a wide system of eelgrass flats full of sea trout and redfish. Just stay away from the manatees, which will surface beneath your kayak and can tip you out of your boat.

All photos by Jeffery Fortuna