Muskies at the Wire: Figure 8 vs L-Turn

Figure eight or L-turn? Make that decision one cast at a time 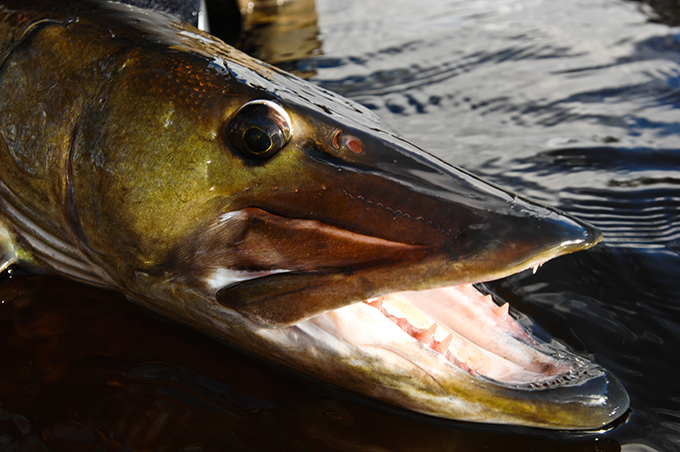 Muskie anglers love to debate the effectiveness of a figure eight versus an L-turn at the end of the retrieve. They bicker over how often you need to execute one or the other: every time, or only when you see a fish following? Both methods quickly change a lure’s direction, which is often the trigger that causes a following muskie to strike. The truth is that they both have a time and a place. Keep these rules in mind, and you’ll have a better shot at hooking the next muskie that’s hot on your lure’s tail.

Turn for the Better
An L-turn is a quick sweep of the rod to the right or left when the lure is about 15 inches from the tip. This motion is far less physically taxing to perform than a figure eight, which is why many guides suggest making an L-turn at the end of every retrieve. It never hurts because a fish swimming below the lure may not be visible until the last second. I’ve also seen muskies shoot out from under the boat to eat a lure that’s just about to be pulled from the water. On clear days, even though you may not feel like you need one because of the good visibility, an L‑turn can score these surprise muskies.

Facts on Figures
When should you make a full figure eight at the end of the retrieve? Consider fish behavior and visibility. In low light, or if the water’s stained, you may not be aware of whether you’re being followed; therefore, keeping the lure in the water for a few extra seconds is never a bad idea. If the water clarity is poor, a figure eight also gives a trailing muskie more time to find the lure. In clear conditions, most guides make a figure eight only when they see a fish following, or if an L‑turn wasn’t enough to get a muskie to commit. Sometimes it can take several figure eights, or a change in speed during the motion, to draw the strike.