You’ve been cooped up all winter, and now you’re greeted with miserable early-spring fishing conditions. Don’t freak out. 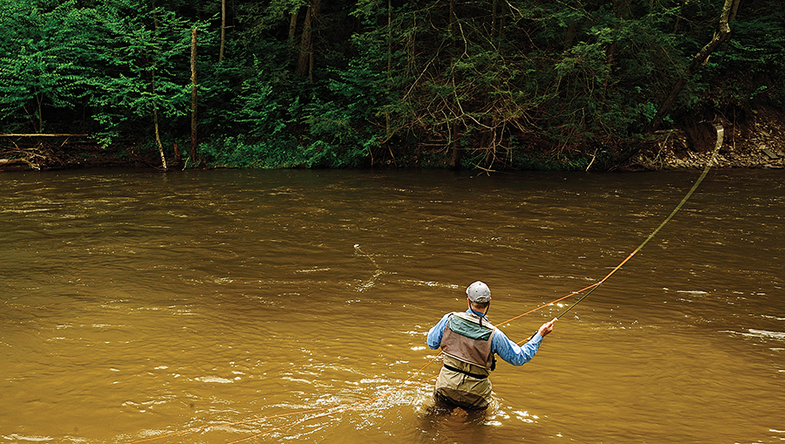 You’re over drilling ice holes. You’ve tied enough flies to last a season. Your tackle has never been more organized. Each drop of melting snow dripping from the gutter gets you more amped for your triumphant return to open-water fishing on the river or lake. Problem is, depending on where you live, that open water is likely to be high, cold, or dirty—or all three. Runoff, thawing ice, and early-spring rains can make any water extremely difficult to fish, but they can also offer big advantages. In fact, these pros would wager that if you can just tough it out, that bone-chilling chocolate milk could produce your biggest pike, bass, trout, walleyes, and crappies of the season. Here are their strategies to find and catch March monsters.

Find Them
“When a trout river is high and dirty, fishing slow breaks, seams, and eddies behind structure or near the bank is obvious,” Edwards says, “but what if runoff is so bad there’s no bank left? That has never scared me. I’ve fished a lot of flooded woods and cornfields. Water running over land is shallow, so it warms faster. When a river spills onto land, it has to run back into the main body again somewhere. Find that spot. Trout will stack at the mouth of a floodwater confluence, because that flow will bring worms and baitfish right to them, and that spot will be a little less frigid than the rest of the river.”

Catch Them
“When the going gets tough, I use a 4-inch worm fly invented by my friend George Maciag,” Edwards says. “It’s made of strands of needlepoint yarn, and it has a heavy epoxy head. The hook is positioned at the worm’s tail. Unlike a San Juan worm, this fly gets down fast and has action more like a big streamer. I high-stick it, keeping it bouncing across the bottom through any slow current or slack-water zones where I think a trout might be taking refuge. There will be no doubt in your mind when it gets hit. Big trout hammer it.”

2. Smallmouths: Put Out the Vibe

Find Them
“On our lakes, we’re not dealing with high or dirty water right after ice-out as much as cold water. It will be in the 38- to 42-degree range. I think anglers have a misconception that cold water is tough, but we routinely have 40- to 100-fish days this time of year, and the fish are at their heaviest. The most challenging part is finding them, but once you do, they’ll eat. I focus on steep dropoffs that transition to shallow areas where the bass will spawn as the water warms. These areas are typically located at the ends or along the sides of points that jut into the lake.”

Catch Them
“A Silver Buddy blade bait is hands down the best lure for this period,” Blais says. “I don’t really care what color it is, because it’s the vibration it makes that draws the strike. Once I find the fish stacked up, I’ll sit right on top of them and work the lure slowly over the bottom. Just reel enough to pick up the slack, and give the lure occasional twitches to make it hop off the bottom and vibrate. One thing to note is that you need a fast rod to get the right action. A soft, wimpy rod won’t give the lure the same snap.”

3. Largemouths: Get Some Clarity

Find Them
“The most important thing when the water is up and dirty is finding cleaner water,” Gluszek says. “It doesn’t have to be crystal clear, but even a little more clarity than the main body goes a long way. If the banks flood, the water that covers the normal bank usually has better visibility. It’s also where the baitfish are going to go, and the bass will follow. Get as far into the flooded areas as you can and fish the new bank, which is wherever the water stops. Focus on hard structure, like wood or rock in these areas, as they’ll provide the best holding points for bass.”

Catch Them
“When the water is dirty, bottom contact is very important,” Gluszek says. “I tie on a heavy Buckeye Mop Jig as big as my hand in a dark color, which seems to stand out better in muddy water. I’ll coat the jig with Smelly Jelly, add rattles, use a 5-inch crawfish trailer—whatever I can do to make it as noticeable as possible. As I bring the jig back to the boat, I want it clacking and knocking off of any wood or rocks out there. The more noise it makes, the more you’ll get bit.”

When the water’s really high, I pass on split shot to get my streamers and spinners deep and carry an assortment of bullet weights. When you need to punch through heavy current—or stay in the sweet spot—peg a bullet weight just ahead of your Rooster Tail or Zonker. These hydro­dynamic weights nosedive faster than shot and won’t hurt lure or fly action.

4. Walleyes: Take it to the River

Find Them
“Walleyes run up rivers in fall,” Okada says. “This is where they winter over, and in early spring their location offers anglers without boats the best shot at prespawn giants. Most rivers have known spots, like slack holes below dams that get pounded, but if you’re willing to hunt, you can find less pressured fish. Also, the higher the water, the more the walleyes will gravitate to shallow runs, and this time of year they can sit really skinny. Focus on areas of slower current near confluences of smaller creeks, or eddies behind small wingdams.”

Catch Them
“What’s different about fishing rivers early in the season is that you can get away with one small box of lures and a pair of waders instead of five trolling rods and 10 tackle bags,” Okada says. “But if there’s one thing you need in that box, it’s a No. 7 Rapala Countdown Minnow in chartreuse. You want a color that stands out. These lures also have a heavier lip than similar baits, which helps them dig more quickly in current. I’ve always found a slow, steady retrieve most productive.”

I don’t really like putting attractants on my lures. About the only time I use them is early in spring when the conditions are nasty, because anything you can do to make a lure stand out is helpful. I avoid sprays, liquids, and dips, and instead use FishSticks Lure Enhancer ($11; fish​sticks​lure​­enhancer.com), which comes in a tube like Chapstick. It rolls on, doesn’t melt, and won’t ever funk up your tackle bag, car seat, or boat deck.

Find Them
“In early spring, finding fish is less about water temperature and more about clarity. The muddier the water, the shallower the fish hold. This time of year, I’m trying to intercept big prespawn fish as they transition to the spawning grounds. I typically find them over wood, flooded timber, or riprap 5 to 10 feet deep at the mouths of bays. Thing is, a spot that’s hot today might be dead tomorrow because the fish are moving, so be prepared to hunt.”

Catch Them
“Good electronics are key,” Schoenherr says, “because you need a clear picture of exactly where the fish are holding on the structure. Once I have that, I’ll use the trolling motor to hold me in position directly over them for vertical jigging. When the water is dirty, I lean on a Road Runner jighead tipped with a 2-inch glow-in-the-dark tube. I’ve done a lot of testing with glow baits, and you’d be surprised what a huge difference they can make in drawing strikes compared to non-glowing tubes when the visibility is low. Because you can quickly change depth, I use jigs more often than live bait in March.”

Find Them
“As soon as the ice comes off, the pike will gravitate to shallow, sandy, or muddy bays,” Babcock says. “These flats are usually a few degrees warmer than the main lake, and the pike need that warmth to speed up their metabolism. We’re lucky, because while the water is high in the beginning of the season, it’s very clear, which actually makes early spring the best time to sight-fish. Once all the water in the lake warms up, these fish will move to the weedbeds and become more difficult to pinpoint.”

Catch Them
“How pike react to lures at this time of year can vary from day to day depending on the water temperature and weather,” Babcock says. “Sometimes you need to retrieve slowly because the fish are cold and don’t want to move far or fast. The next day, they’ll charge a lure that’s ripping. But as a general rule, I like to cast 15 to 20 feet past the fish I’m trying to catch and start with a fast retrieve. I’ll stop the lure just as it reaches the pike, and then pick up the speed again. My go-to lure would be a Len Thompson Spoon, size 2 in black and yellow.”

Be a Blade Runner

Early in the season when the water is stained, a simple spinner blade can really save the day. Try replacing the rear hook of your jerkbait or crankbait with a spinner blade on a barrel swivel. You can also slide a spinner blade and clevis (the kind used to make walleye worm rigs) ahead of your streamer flies. Yeah, it’s dirty, but so is the water, and the extra flash and vibration can mean the difference between playing fish and playing in the mud.