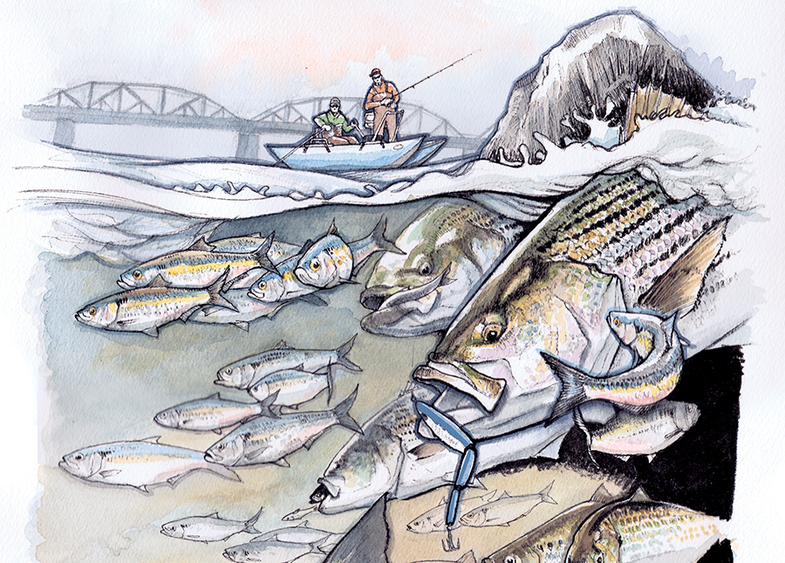 My buddy Jim Fee saw the first striped bass from the front casting deck. The fish went maybe 27 inches and paid us little mind as the pontoons of my raft drifted above its back in 3 feet of water. In the last quarter mile of our float, we’d seen channel catfish, shortnose sturgeon, and a fat smallmouth crashing bait near the bank. At first, the striper was just another species checked off, something cool to see. But then we spotted another, and another. In the blink of an eye, we were in a blitz. On all sides, clouds of terrified herring flashed silver and purple as bass surged in for the kill.

I know this stretch of the Delaware River intimately. We were only a few miles above the tideline but well over 40 from the salt front. In summer, this is smallmouth water—a mix of slack holes, flats, and giant boulders; you can wade from Jersey to Pennsylvania in most places. The high-rise office buildings in distant Trenton look the same now, but the river is a different place in April. Running high and cold, it’s a pipeline to the ocean. Anyone who fishes coastal rivers from Maine to Georgia understands the magic window in spring when anadromous species move up and mix with resident fish—and that it doesn’t last long.

Earlier that morning, Fee and I had been anchored at the edge of a mid-river eddy, swinging for American shad, another oceanic migrant that makes a massive spawning run up the undammed Delaware this month. They don’t eat now, but they’ll smack a shad dart or flutter spoon flashed in their faces—and when they do, you’ve got a serious light-tackle challenge on your hands (see “Shad Hacks,” p. 40). Shad have paper-thin mouths that tear very easily, so the trick to handling their fast runs and athletic leaps is keeping your drag set light. Of the 12 we’d hooked, half made it to the net, including a 6-pound personal best for Fee. Shad had been the plan from the outset, so as I rowed downstream toward the takeout, we were totally satisfied with our day. Until we saw the stripers.

Too Little, Too Light

We hadn’t planned on the bass, and now we had a big problem. All we’d brought were light spinning rods, and some of these stripers were pushing 40 inches. Given the clear water and bright sun, we didn’t expect to see stripers at this time of day, but there were at least 15 in eyeshot, and more kept appearing as the current pulled us downstream. Despite being undergunned, Fee tied on an 8-inch plug—one of three I happened to have in my bag​—​and made a short lob. Four bass charged the bait, fighting over it, until one finally committed. The reel’s drag screamed for just a couple of seconds before the soft rod caused the hook to pop loose.

I dropped the oars and fired one of the other plugs, splashing it down near the bank. On the second twitch, a bass jumped all over it, leaving a 3-foot hole in the surface. The fish surged upriver, pushing a school of herring ahead of him, and then came unglued. Our rods just didn’t have enough backbone to sink the hooks; the line wasn’t heavy enough to crank down the drags. I tried dropping the anchor to keep us in the action, but it wouldn’t catch on the small cobblestones. The river was too fast.

Slipping away, with so many fish around us, we turned frantic. I jumped on the oars, trying to back-row. Fee fired a long bomb to a far-off cluster of boulders, and we watched stripers charge out from behind every one to take a swipe at the lure as it passed. He came tight again but lost the fish after a few headshakes. Then all of a sudden, as fast as we’d come into the fray, we drifted right out of it. No matter how hard I rowed, we kept sliding downriver, so I maneuvered us over to the river bank.

Parked there for a minute, I shook my head. Two nights prior, another friend and I had floated this same stretch with beefy saltwater spinning rigs loaded with 30-pound braid. Our metal-lip swimmers, Bomber Long A’s, and 10-inch Hogy lures dangled from 30-pound fluorocarbon leaders. We’d caught nothing that night, and this morning I had eyed that gear leaning in a corner of the garage, wondering if I should take it, just in case. Hours later, I’d have given anything for one of those rods. Somehow, I’d forgotten the one ironclad rule on coastal rivers in spring: Be ready for anything.

“All we can do is drag the raft back up and take the drift again,” I told Fee, knowing it would be a tough half-mile trek—and that we probably still wouldn’t land anything. He didn’t even think about it.

“Let’s do it,” he said, jumping out and grabbing the front lean bar. “We’re here now, the bass are here now, and in a few weeks they’ll all be gone.”

When herring run up coastal rivers, they become the primary forage for everything from migratory stripers to resident walleyes and smallmouths. Problem is, it’s illegal to possess live herring on many rivers, and when schools of the baitfish get thick, fooling gamefish on artificials can be tough. So go early in the run, before the river is pulsing with herring, and use plugs that match them as closely as possible. You know that triple-jointed bait with the holographic eyes and photorealistic scale pattern you scoffed at in the shop? Like the LiveTarget Blueback Herring shown here ($19; live​target​lures.com)? Now is the time to put it into play.