Bugs that pull double duty in the early season. 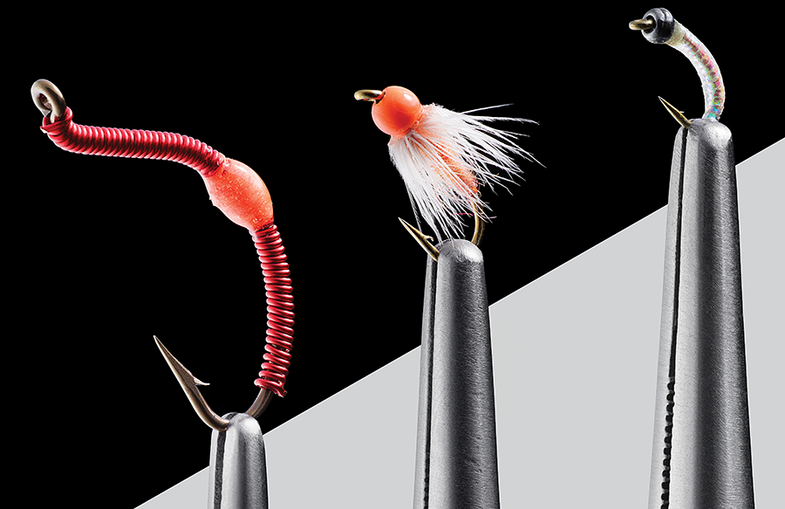 Guides hear it all the time: If you could use just one fly, what would it be? There is no single right answer, but in March and April you can cover a lot of water with bugs that have more than one kind of allure. These pre-runoff flies mimic more than one food source and trigger reaction bites, too. Three pros from the Rocky Mountain region tell us which double- and triple-threat patterns they bank on now.

The Wriggle Rig
“At this time of year, the one fly I never leave home without is a red wire worm, and I usually fish it with a Pheasant Tail dropper,” says Tim Linehan, owner of Linehan Outfitting in Troy, Mont., who fishes big water like the Kootenai, as well as small streams. “It’s heavy, so it gets the dropper down fast and is as much a part of the rig as it is a worm. It’s an attractor, too. The fish love it right now.”

The Hot Head
Jeramie Prine of Dunoir Fishing Adventures in Lander, Wyo., chooses a Firebead Soft Hackle Sowbug for Western tailwaters. “Because of the bright head, it doubles as an attractor or even an egg fly. Trout are at least going to look at it,” he says. “At this time of year, we typically fish below the surface. When this pattern drifts near a fish in perfect sync with the current, it will get eaten.”

The Made-You-Look Midge
For John Perizzolo, a guide on the upper Colorado River, annelids are a reliable early-season draw for trout. “I throw a pattern I designed called a Pearl Zombie Midge,” he says. “Midges are the main active insects on the river, and this looks like a midge emerger, but it also copies 1⁄4-inch gray annelids out there. And because it’s made with Krystal Flash and a black gunmetal glass bead, it’s an attractor too.”