How to Catch Monster Largemouth Bass 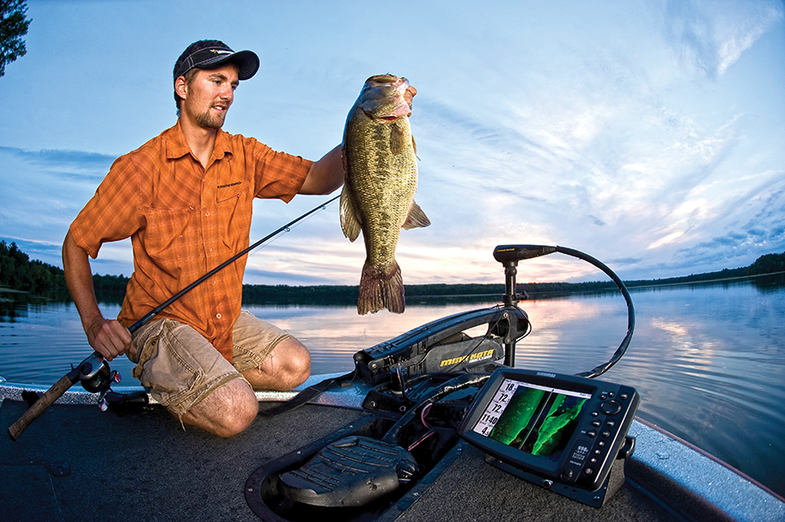 Leave the little worms and crankbaits home, because a big postspawn largemouth wants a big postspawn meal. Large swimbaits and giant worms are the name of the game—if, that is, you’ve got the dedi­cation to throw them from sunup to sundown. Here’s your battle plan, Icy Hot not included.

Friday Evening
Prep your tackle now because the action can happen right out of the gate on Saturday morning. Since you’re focusing on big bass, limiting your tackle to gear suited only for hawgs takes away the temptation to play with the little fish. You want a stout 7-foot 6-inch swimbait rod and a baitcaster loaded with 16-​pound fluoro­carbon. Make sure your drag is oiled, as it will hopefully be spinning. You also need a 7-foot worming outfit with plenty of backbone, loaded with 14-pound fluoro.
Fire up your electronics—or grab a paper chart—and figure out a few key areas to hit at first light. What you want to look for is deeper water in close proximity to the shallows where bass spawn. Creek channels that act as highways between shallow and deep water make excellent targets, as do any submerged points near the spawning grounds in 6 to 14 feet of water.

Saturday Morning
In much of the country, the postspawn coincides with the shad spawn. In the early morning, fan-cast a 6- or 8-inch clear-and-gold or pearl paddle-tail swimbait around those deep spots you marked last night. If you don’t get bit in the first two hours, roam a little shallower and keep an eye out for flips and dimples from spawning shad around rocky outcrops and riprap points. When you find activity, work your swimbait around the perimeter, as this is where the big bass will lie in wait for a wayward shad.

Midday
If you haven’t bested a beast by noon, pick up the worm rod, head back to the deep areas where you started, and fish slowly on the bottom with a Texas-rigged 10- to 12-inch ­ribbon-​tail worm in green pumpkin or grape. Feel for subtle differences in the bottom, such as drops, brush, grass, or lone pieces of hard structure. Be sure to alter your retrieve cadence. For example, if you slowly dragged the worm over a piece of structure on the first retrieve, recast and aggressively pop it over on the second pass. Quite often, a big bass will follow a worm for a while but only eat it when it makes an abrupt movement.

Evening
Pick up the swimbait rod and stick with it until just after dark. Focus your efforts on points. Those you can clearly see as an extension of land are good, but hidden gems only visible with your electronics are better. Cast across the points and reel quickly. Keep the bait closer to the surface as the sun sets, allowing it to create a wake. Brace yourself; if you get hit now, it’s likely to be a heart-​­stopping explosion.
If you’re hawgless by the time you go to bed, set your alarm for zero-dark-thirty and go rogue on Sunday. Don’t stray too far from those deep areas near spawning grounds, but try throwing the big stuff around key pieces of shoreline structure where you’d normally throw a smaller spinnerbait later in the season. If you move or catch a smaller bass, back up and work the same area a little farther offshore. Your tank could be hanging on the edge of the brat pack.