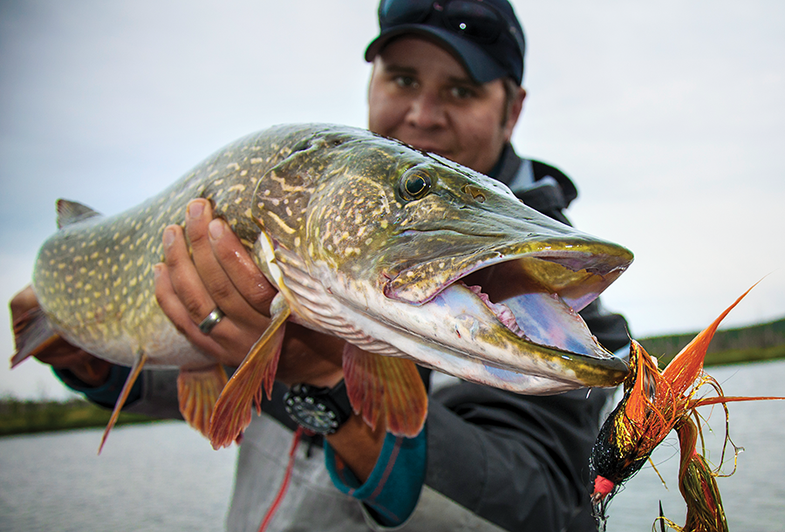 The ­author with a fly-caught 40-incher. Photo by Ben Romans.
SHARE

Far northern Saskatchewan, Cree River Lodge provides access to more than 200 square miles of some of the world’s most unspoiled pike waters. Last season, three other writers and I got to fish this pike paradise for four days. Within 15 minutes of the first morning, we had a 42-inch beast on the line. By the last evening, using both fly and conventional gear, our group had boated nearly a thousand pike. Twenty-nine of them topped 40 inches.

The action was off the charts, and insanely fun. But it was also an education. I witnessed a volume of pike behavior that a Lower 48 pike hunter might not see in several seasons. Patterns that could take years to unravel on pressured water unfolded within hours. In short, I got a crash course in pike fishing—and took away eight key lessons about what works and what doesn’t when it comes to putting more and bigger pike in the net.

In fact, the biggest pike we caught on a fly—a 46-incher—took a 6-inch Flashtail Whistler, which is considerably smaller and thinner in profile than most of the other patterns we threw. The longest pike of the trip, which measured 48 inches, hit a 4-inch spoon, despite our throwing some that were larger. Jumbo flies measuring up to 14 inches didn’t score a single fish over 40 inches, although they did pound loads of pike in the 32- to 36-inch range. In the end, hooking slob fish seemed to be less about fly or lure size and more about fish mood. If a big pike is on the feed and your offering gets in his face, he’s apt to smoke it, and he’s not only as likely to grab a 6-inch bait as a 12-incher but maybe more so.

Lodge owner and guide Pat Babcock was adamant about sticking to spots with an abundance of 12- to 15-inch fish because, he said, heavy pike love to chow down on the babies. And he was right on the money. Almost all of our 40-plus-inchers came from locations where we had to pick through lots of little guys. Conversely, there were several spots where we couldn’t keep 30- to 36-inch pike off the line. We thought it was great, but Babcock wanted to leave. He said fish in that size class outcompete true trophies for food, so we weren’t likely to find a 40-plus fish in the mix, and sure enough, we never did.

Lure or fly action is more important than color

A lot more. We found that while pike would attack any color of lure or fly that hit the water, those that maintained some movement during the pause caught more and bigger fish. Jointed streamers and flies with wide, cone-shaped bucktail heads produced best, because when paused, they would flutter or jackknife, allowing the material to pulsate. With conventional gear, spoons outfished all other lures, and most hits came during the pause, when the spoon would flutter toward the bottom.

Given that we were fishing for some of the most unpressured pike on the planet, I can say with confidence that trophy-size fish are in a league of their own when it comes to avoiding the hook.

On the first day, our group caught 13 pike over 40 inches with little effort. For the next three days, bites from fish that size were fewer and farther between. We had follows from huge fish. We’d see them ghost up under our flies and lures. But they wouldn’t commit like before. It showed us that the biggest pike were far more in tune with subtle changes in weather, temperature, or pressure than smaller fish, which ate all day, every day, with abandon, seemingly unaffected by the slight fluctuations that got the monsters wary or off the feed.

Blown away by the number of active pike, we couldn’t tie on poppers and sliders fast enough. But as soon as we started working the surface, the number of strikes plummeted. We tried topwaters in various water types and under a range of conditions. The biggest pike we could muster went maybe 24 inches. This doesn’t mean you should never work the surface. But if we couldn’t raise good numbers of fish to topwaters in pike paradise, you should probably save yours for when you see fish waking and swirling. Don’t make them your first choice.

Conventional wisdom says you should always strip-set when trying to hook pike or muskies on the fly, and it certainly doesn’t hurt. But what we found most critical wasn’t so much the set as making sure to keep the rod tip low to the water, or even submerged a few inches, on the retrieve. Most pike piled on so hard that the low rod angle made them hook themselves, and we could lift the rod immediately after the strike. Sharp hooks helped in this department, too. When hits were subtler, or the fish bit and swam at us, it then became necessary to jab the fish with a strip-set. But this, too, only worked well if the rod tip was low to begin with.

Despite the water’s clarity, Cree River pike showed no signs of being wire-shy, which was no surprise given how little they are fished. But here’s the proof that even slight pressure makes a big difference: Our guides noted that for fishing off the lodge docks—which see more fishing effort than the surrounding water, but still less than many Lower 48 lakes—switching to fluorocarbon can be the ticket on sunny days. It’s often the same group of pike hanging around, and they do get wise to a wire leader.

If a giant pike T-bones the small one you’re reeling in, stay calm and apply steady pressure

This happened to us three times. All the big pike has to do to get free is open its mouth, so there’s no surefire method for landing the monster. But you can put the odds in your favor by using gentle rod pressure to inch the fish toward the boat—so that it hardly realizes it’s being pulled. The net man should have the bag half submerged in advance, so you can steer the pike right to the hoop. It’s still a long shot; we missed two of our three chances. But it can be done, because we did put one 40-plus-inch pike in the boat this way.

To see how intense the pike action gets in this Esox mecca, check out the Hook Shots ­episode. Cree River Lodge hosts anglers from May through mid September, and while many think of June as the traditional big-pike month, Pat Babcock recommends visiting in late summer. Water temperatures remain cool and the fish have fattened back up after the spawn.