The Monster Weekend Manifesto: How to Catch Trophy Fish in Two Days

You know it’s there, in your lake or stream. The wall-hanger. It’s the biggest, oldest, and smartest fish in the water. No one’s ever caught it. That will all change in the next two days. 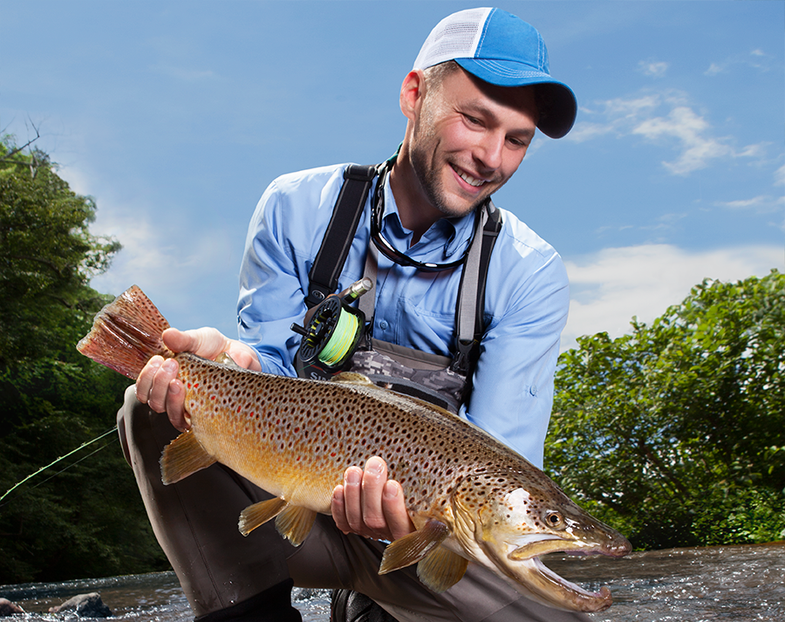 **How to Catch Monster:

There are many terms for small fish, none of them complimentary to your angling ability. They don’t fight hard. They draw faint praise from fellow anglers. They look small in photos, no matter how far you extend your arm toward the camera.

No, You Can’t Do That. You’re Fishing All Weekend

Do not make plans to fish both Saturday and Sunday if you might have to take the dog to the vet, fix the truck, get married, help a friend move, etc. Clear your calendar, and let people know that you won’t be available for any kind of social obligation. Get your errands done during the week. Or forgo it all and just accept the fact that you’re leaving your home life for a while. Casting to a bed of lily pads at sunset, just when a 10-pound largemouth has decided to cruise up from the depths and demolish that pesky ­Pop-R on the surface, is no time to be worried about making an overdue credit-card payment. You’ll miss the hookset, and you’ll still owe the late fee.

Similarly, don’t enter into this with the underlying belief that you’ll catch a monster by noon, and don’t tell your significant other that you might be back that evening so you can go out to dinner and then watch The Notebook while wearing matching Snuggies. Admit to that and you’ll find yourself driving home by lunchtime for a shower and a nap. You won’t be back until after sunset. O.K.?

Yes, take your cellphone with you. No, don’t turn it on to catch a score or check texts. Only hit that power button when you’re ready to take some selfies with that giant you just netted.

Get Your Tackle Ready and Right

You finally have a wall-hanger on the line. Your line peels out. Your heart starts hammering. The fish jumps and you see it for the first time. It’s unbelievably big and beautiful and powerful. This is the one.

And then your line goes disgustingly limp and slack. You reel and reel, hoping, praying. Please, be swimming toward me!

But you know. Gone.

Plenty of large, powerful fish that would otherwise have wound up at the taxidermist are still swimming because someone’s improved clinch looked “close enough.” You can’t do anything about the hidden deadfall treetop that the lake-­record largemouth burrows into, but you can change that fluorocarbon leader after it tangles around your lower unit. You can replace last year’s line, or at least cut off several feet to eliminate weak spots.

You can sharpen your hooks. A hook hone is one of the cheapest and most useful pieces of tackle around, yet it is one of the least utilized. Sure, factory hooks are sharper than ever, but a lure that has bounced around in a plastic compartment and then scraped against boat hulls and gritty bottoms has lost penetration ability.

You can bring a landing net, and keep it where you can reach it with one hand. Swinging a heavy fish onto shore or over the side of the boat is a risky experiment in physics that can result in a loud splash and much cursing. Likewise, feeling the heft of a big fish in your net for the first time is impossible if the net is in your car trunk, as I found when I tried and failed to lip a smallmouth that was well past the 20-inch mark, ripping the hook out in the process.

You can patch your waders, tune up your outboard, lube your reels, and bring a backup rod and reel. A spare outfit kept me kayak fishing, and led to my biggest summer flounder ever, when my primary reel suddenly seized up after too many saltwater drenchings.

Be a Trophy Fisherman, Not a Guy Who’s Just Out Fishing

There’s more to trophy fishing than knowing the best lure to use. It’s a holistic endeavor, and there’s nothing New Age about it. A serious trophy angler won’t:

• Stay up late the night before, watching TV and arranging empties in artful patterns on the coffee table.
• Hit the snooze button half a dozen times the next morning.
• Hunt around for his tackle 10 minutes before he leaves for the water, and then…
• Learn that he’s low on hooks, bait, lures, sunscreen, dip, bug repellent, drinking water, and/or food when he finally does get there.

Get that gear ready, gas up the truck, and hit the sack. Make sure your fishing partner, if you have one, does the same. The only thing worse than driving back home because you forgot your tackle bag is driving back to your buddy’s place because he forgot his.
When you do get on the water, don’t just slip into default mode and cast to promising spots. Pay attention to conditions and adjust accordingly. Subtle increase in wind speed? Maybe you should try a windward shoreline, where bait is getting trapped. High ­water? Look for areas that are newly flooded, which attract fish. Does a certain insect or baitfish species seem prevalent? Try imitating it, in size if not in color. All of this may sound routine and simplistic, but it’s surprising how many fishermen will stick with one lure, tactic, or location simply because it produced once before, even if that happened during the first Reagan administration.

Careless fishing rarely leads to trophies. Don’t walk right up to what seems to be a good stretch of water—approach it subtly and fish the outer edges first, where a big fish may be patrolling. I spooked one of the biggest stream brown trout I ever saw as I sloppily stumbled down the bank of a central Pennsylvania trout river early one morning. If I’d paused to scan the water from a distance, I would at least have had a shot at him, instead of simply watching his breathtaking iris-size spots wink away into the depths.

You shouldn’t expect to catch a trophy immediately, or after a few hours, or even after the first day. It’s fishing, after all. Look on that time spent not as a failure but as a learning experience, which you can apply to the rest of the weekend.

If you get tired after several hours of fishing, take a break. Beach the boat, put down the rod, have some coffee and a snack. The time you’ll miss on the water will be more than made up for by the renewed energy and enthusiasm you’ll have when you pick up the rod again.

Finally, always trust your intuition. It’s widely believed that primitive man had a strongly developed sixth sense that helped him hunt animals and defend against raiding enemies, and that this faculty, vestigial as it may be, still exists in us.

On a fishing trip to northern Ontario many years ago, I found a short stretch of the Albany River in late afternoon that, at first, didn’t appear different from the dozen others I’d fished that day—but there was something about the texture of the water there that got my caveman neurons firing. I worked a small white-winged streamer through the deep run, and when the rest of my crew found me and said that they wanted to go back to camp, I dawdled, making a few last casts while they stood on the bank and groused. A minute later my rod doubled, the reel spun, and everyone started shouting. That brookie is still the biggest trout I’ve ever caught.