Bitten: When a Bull Shark Strikes

In April, Rick Neumann, 70, was spearfishing for cobia with friends in Florida when a 10-foot bull shark attacked. 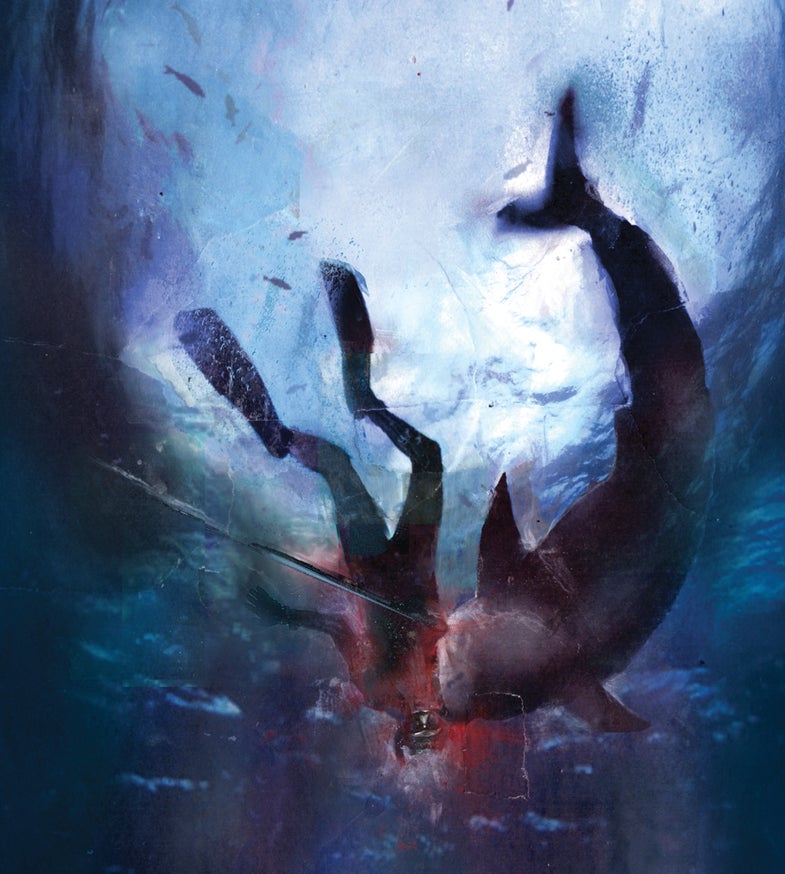 On Good Friday this April, a friend, Julian Cruz, his girlfriend, and I headed out from Jupiter Inlet in his 20-foot Contender. We were out 21⁄2 or 3 miles on an artificial reef. I’d already shot a 51-pound cobia, but there were 3- or 4-foot swells, which made the visibility underwater poor. After I got the fish, we moved to another reef.

You usually work it one guy up and one guy down. Julian went first, came up with a fish, and said, “There are cobia down there.” So I dove down to 40 or 45 feet, and the next thing I know, something slams into my head and right shoulder. And I mean hard—like a hit-and-run. Knocked my mask off. I turned and saw him swimming away—a 500- or 600-pound bull shark, maybe 10 feet long. I probably dove right on top of him, and he was showing me who was boss in his kingdom down there. He bit through the wet suit, and part of me, then realized neither one was a fish and just went on his way. He was probably a little confused himself.

I didn’t know exactly how bad it was, but I rushed back to the surface. Then I saw my friends’ faces and knew it was worse than I thought. I reached up to my head and felt my ear hanging by a thread. I put my fingers in the wound—the side of my cheek just below my right ear—and it was deeper than I imagined. Blood spilled out of my ripped wet suit and ran all over the boat. I was wearing a thick one because I’d thought we might hit some cold water. Looking back, that suit probably saved me from a worse bite.

They called 911 and we headed in. I was sitting on the side rail and holding on to the console. We were running hard, but it still took 45 minutes with that chop. Every time we hit another wave, more blood came gushing out. It was like we were chumming on the way back. My friend kept asking how I was doing. “O.K.,” I said. “But let’s get back as quickly as possible.”

There were all these rescue vehicles at the pier. The EMTs put me on a gurney and cut off the top of my wet suit. I was starting to get dizzy from blood loss. They put me on IVs, then got me on a helicopter to the St. Mary’s Hospital trauma center in West Palm Beach.

I was wheeled into the operating room and met the anesthesiologist. I woke up 200 stitches later. They reattached my ear, and closed up my cheek, the gashes down my neck, and some more on my shoulder and back. These wounds were all from one bite, so it was a big shark. The doc said I was lucky. There are all kinds of arteries and glands in that part of the body that somehow didn’t get hit.

I still have a healthy respect for the ocean, but I’m used to seeing sharks. This was just a bizarre accident in dirty water—more a case of mistaken identity than anything else. Normally a shark is not going to go after a human being. I’ve been spearfishing for more than 50 years, and I’m not going to stop after this. I still like to get in the water and get the adrenaline flowing. Spearfishing is like hunting in the fish’s element. It’s a charge. —As told to B.H.
—
Epilogue
Five weeks after the attack, Neumann said he was “doing good, healing up.” He visited his grandkids in California and was itching to get back in the water. “I need the exercise.”