Live for surface strikes? Never pass on a chance at these three popper bashers. 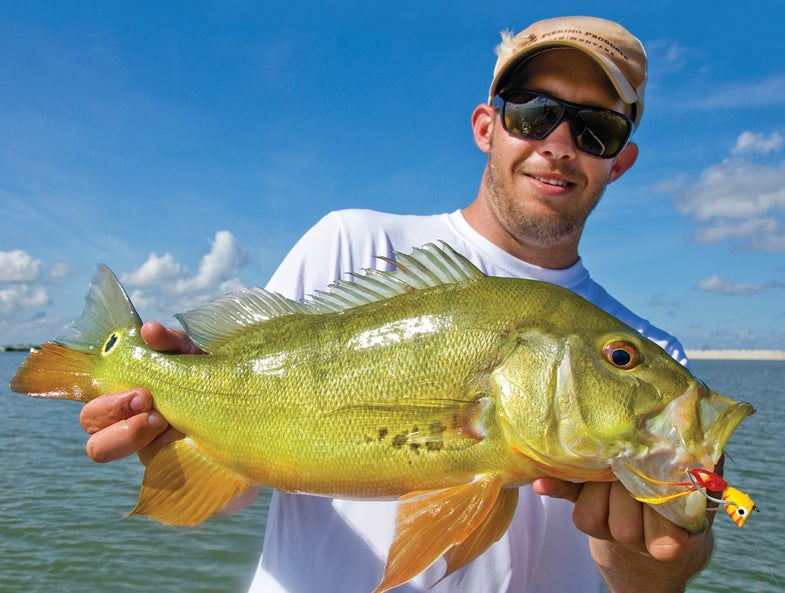 Like most anglers, if I can catch it on top, I’m a happy man. Give me a Jitterbug on a muggy night at the largemouth pond, or a Spook clacking away at sunset on a smallmouth river. From pike to bluefish, salmon to snook, I’ve watched many species smash my lure on the surface, but while all those takes are memorable, some will always stand out more than others. Of all the fish I’ve hooked in a hail of whitewater, here are the three that left me shaking harder than the rest. And if you find yourself in a position to put your own popper in the face of one of these beasts, what I learned will help you survive the detonations.

I didn’t understand the true force of a peacock bass hit until I was standing on the deck of guide Roger Gonzalez’s bass boat, gawking at the bone-colored Spook he was holding up in the early South Florida sun for an autopsy. The rear split ring and treble hook were gone; the eyelet where they once connected to the body was bent open. “Oh my gosh,” he blurted out with a laugh. “That was my favorite topwater!”

There wasn’t much structure in the limestone quarry we were fishing, but it seemed to make little difference to the 5- to 7-pound peacocks that would hit almost anything that moved along the shoreline dropoff. So far we had caught fish on live shiners and streamer flies, but Gonzalez’s surface smash was all the reason I needed to tie on a foam popper. In three false casts, I dropped it into a little indentation in the pale dirt bank. Gonzalez and my friend John Frazier stopped fishing just to watch. Strip. Bloop. Strip. Bloop. I never made the third twitch before a fish hit so hard that it sounded like the crack of a .22 rifle. Water sprayed 10 feet in all directions. Over the next eight hours, I’d sacrifice a dozen foam bass bugs, because I just couldn’t get enough of the violent slashes that made a smallmouth topwater take look like a gentle kiss on the cheek.

Topwater Tip: Peacocks seem to strike surface lures more out of aggression than hunger. If a fish misses, don’t pause as you might when you’re largemouth fishing. Work the lure five times faster. It will make the fish madder, so it’ll hit even harder the second time.

When a 20- to 30-inch striped bass takes a shot at your popper or Spook, you get a nice splash. When a 30-plus-pound striper hits that topwater, it can change your life. The first time it happened to me I was 19, standing on a sod bank along New Jersey’s Barnegat Inlet on a breathless October morning. I’d been glued to the same spot since midnight, working a black Bomber plug through the cut in front of me, suffering the onslaught of the last sand flies of the season. I hadn’t gotten even a nudge in the dark, but now in the gray light of false dawn, the tide was flipping and every once in a while I saw baitfish swirling at the surface.

Weary and not looking forward to the long walk back to my truck, I switched out my diver for a 7-inch pencil popper, determined to stick it out for another half hour. It turned out I only needed to stick it out for one more cast, because halfway through the retrieve, my darting popper disappeared into a vacuum that left a 2-foot-wide depression lingering on the surface before the hooks grabbed and the striper’s broom tail turned the slick water into froth. It wasn’t the feeling of setting on a parked Mack Truck that I remember most; it was the sound of deep suction from the 33-pounder’s massive maw as it took the lure down with the force of Charybdis.

Topwater Tip: Despite their big mouths, trophy stripers often miss topwaters on the first few attempts. When that happens, stop working the lure and let it sit perfectly still for five seconds. If the bass doesn’t grab the motionless popper, it will usually attack the second the bait moves again.

Because tuna are open-ocean roamers that can travel very far, very fast, trolling will always be one of the most effective ways to catch them. But that never stops me from taking a spinning outfit capable of putting a popper in front of a bluefin and handling its fierce run every time I go offshore. Armed and ready, I came close to tuna topwater victory three times, only to get burned by minor details like casting behind my target, or having the school sound just as I got into range. Then last August, on a calm afternoon 40 miles off the Jersey coast, the stars finally aligned.

No other boats were near the hump we’d been trolling for hours with only one fish to show when suddenly—as things happen with tuna—a handful of bluefins began rolling lazily on the surface 200 yards away. My friend Nick Veneziale quietly motored us over as I stood on the bow, heart pounding, praying we wouldn’t spook them back to the depths. In my head, I kept thinking, Another 50 feet and I can reach. Another 25 feet and I’ve got them. When I just couldn’t take it anymore, I launched the popper as hard as I could. I don’t think I was breathing when I made the first pop, and I don’t think I exhaled until long after the Old ­Faithful–​size plume of water splattered back down to the surface. My drag was spinning so fast I thought the reel would catch fire. If you think about the odds of being in exactly the right place at exactly the right time to pop a tuna in the Atlantic Ocean, it’s incredible that we took five more fish off the surface after landing my 30-pounder. That’s kind of like hitting the lottery a half dozen times in one day.

Topwater Tip: Running up on a school too fast and scaring them will blow your chances at topwater tuna. It takes patience and willpower, but you’ll increase your odds by trying to calculate the direction the tuna are moving, getting ahead of them, and letting the school come to you.

Looking to take heavy hitters like tarpon, muskies, tuna, or giant stripers on a popper? You’d better make sure your weapon of choice is up to the task. Opt for lures that are through-wired (A), as screw-in hook eyes are liable to be ripped out. Likewise, extra-heavy split rings (B) are less likely to twist open from a brutal shot or extended fight. Finally, replace factory trebles with heavy-gauge trebles (C), as bent-out hooks account for a large majority of brute fish lost on topwaters.