Need a False Albacore Fix? Say Your Prays and Buckle Up

Photograph by Tosh Brown Four hours in brutal traf­fic. That’s the price I was paying to reach Montauk on the... 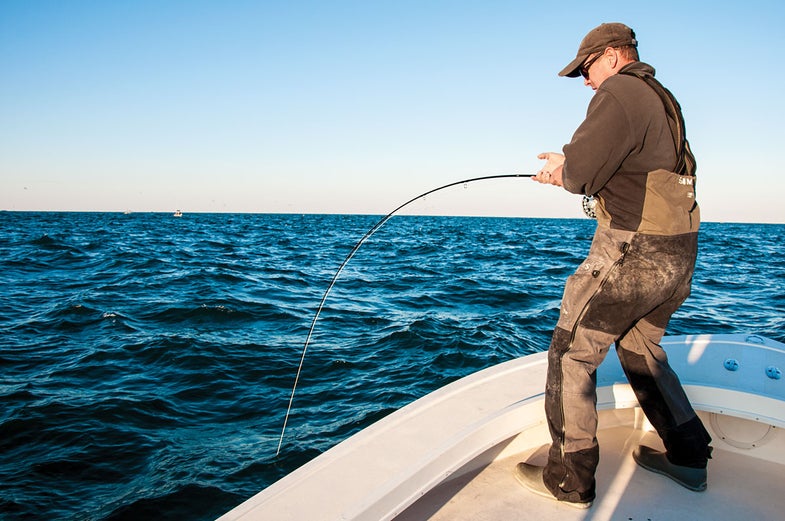 Four hours in brutal traf­fic. That’s the price I was paying to reach Montauk on the far east end of New York’s Long Island. As if the backup on Staten Island and the construction in Brooklyn weren’t soul-crushing enough, every half hour I’d get a call from my friend, guide Craig Cantelmo, who was already out east. “Dude, huge school of albies under the lighthouse right now.” Ugh. “They’ve moved around to the north side, acres and acres of them!” With each update, my blood pressure spiked, and without even realizing it, I began driving like Mad Max. The average Southerner would say I was crazy for risking a shot at becoming a smear on the Beltway to catch false albacore, known as “bonita” from South Carolina to Texas, where they’re thought of as by-catch suitable for cutting up into strip baits. But in the Northeast, these smallest members of the tuna family—swimming muscles with torpedo speed—make otherwise sane anglers pin the throttle to nutcase.

In the South, where the water is warm year-round, false albacore never go away. They’re always around, hitting lures intended for dolphin, or chomping expensive live baits dangled for sailfish. In essence, they are a nuisance, especially considering that their dark, oily flesh has—at least for most people—zero food value. In the North, they are migratory, making their first showings offshore in midsummer. Then, as the waters cool in fall, they move in close to the beach to feed on small baitfish flooding out of the bays. Suddenly, the guy with a 20-foot skiff or kayak has fish that fight harder than every striped bass and flounder he’s caught all summer right in his wheelhouse. In a good year, the lucky surf caster on the right jetty at the right time will get shots, too.

But the thing about false albacore is that you can never set your watch by their arrival and departure. The right water temperatures, wind directions, and baitfish migrations have to harmonize to get the fish in close. Then you have to hope they stick around. A few days of steady action in one place is exceptional; reports of a couple popping up here or there, maybe long enough for someone to hook up, maybe only long enough to get a fleeting glimpse, are the norm. A week prior to my driving out to meet Cantelmo, a buddy of mine spent an entire day in Montauk chasing small pods of albies that would bust up and go phantom in the blink of an eye. It was hours of run-and-gun in choppy seas and enough false casting to dislocate a shoulder. He connected with a single fish that ended up pulling the hook. Now, five days later, Cantelmo was making it sound as if any small jig, metal lure, or fly that hit the water got hammered instantly.

Our hands had barely unlocked from a shake before Cantelmo and I were barreling along Montauk’s northern shore in slick-calm water glazed over orange by the late-afternoon sun. As we rounded the point, Montauk Light came into view, along with dozens of boats spread across the rips below where the Atlantic clashes with the strong tidal currents draining Long Island Sound. From a mile away we could see thousands of gulls and terns dipping and swooping in a chaotic cloud. As Cantelmo slowed the boat off plane, we lifted in a swell that was painted brown with massive schools of tiny anchovies near the crest, and silver-blue with streaking albies at the base. Fish were breaking and boiling all around us. Every rod on every boat was doubled over.

We were both used to making 60- to 70-foot casts to reach a skittish school of fast-moving “hardtails,” but today, with a 30-foot shoot and three strips of an anchovy fly, I was in. The fish seemed hell-bent on beaching itself somewhere in Connecticut. Luckily, amid the shouting and whooping, I remembered to keep my hand off the reel, because when an albie is running full steam, the handle spins so fast it can, quite literally, break your knuckle. Given the 10- to 15-minute fight times per fish, we managed a half dozen albies apiece before the October sky went dark. The next day, the action was just as fierce, and although our arms ached, we couldn’t stop casting because we knew it could all be over tomorrow. Turned out, thanks to a cold front, it was over for the season three days later, but the satisfaction of knowing I was there to get my piece of the action was exactly the kind of fix that gets a false albacore addict through a long winter.