Three nymphs that will thaw the appetites of frost-brewed trout 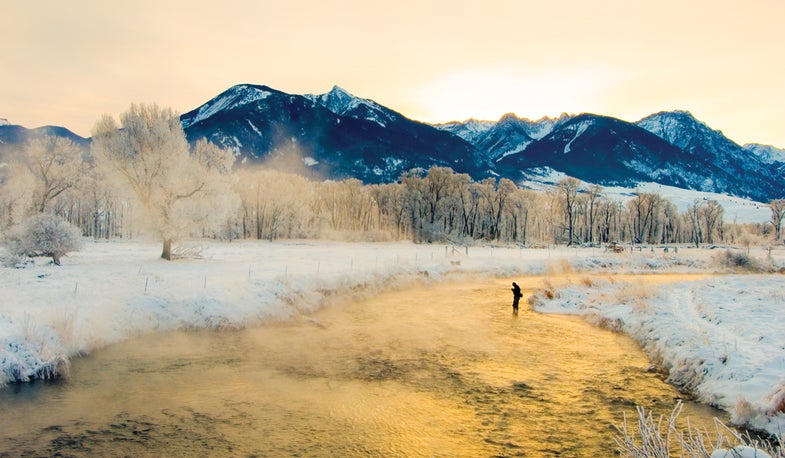 For anglers who have thick skin and patience, the looming cold months offer less crowded trout rivers and lakes. Everything from the water to your casts to the fish may move slower in winter, but what doesn’t slow down are the bugs. Midges are always hatching somewhere, usually during bankers’ hours from 10 a.m. to 2 p.m., when the sun peaks. You may see surface takes, but more often than not, it’s the driven ­nympher that hooks more chilled-out trout. These three patterns are musts for your winter arsenal.

Arguably the most productive winter pattern ever created, this fly sinks quickly relative to its size when tied with a tungsten beadhead. The Zebra is versatile; it works well in swift and still water. Use it as a dropper below a dry fly or indicator, or in tandem with a heavier nymph pattern.

Created by Charlie Craven, this fly is made to imitate a bluewing olive nymph for notoriously picky trout. While the beadhead version catches fish, I prefer the unweighted JuJu. It’s the perfect fly to sink below a dry pattern in shallow moving water, and when tied on a larger hook, it also kills in still water.

Pat Dorsey designed this lightly weighted version of the Zebra Midge specifically for fishing Colo­rado’s South Platte, which is a tailwater. It shines in long, slow tailwater runs anywhere in the country, and when rigged below a tungsten nymph or split shot, it floats through feeding lanes with a convincing natural drift.

Humans may boast opposable thumbs, but trout are able to see ultraviolet light—that is, beyond violet, which is the highest frequency in the visible spectrum for our eyes. Water absorbs light according to wavelength. Longer wavelengths, such as red and orange, are absorbed quickly near the surface; whereas the shorter wavelengths of green, blue, and violet are visible at greater depths. Fish evolved to see movement and contrast at the expense of great detail, so in low-light winter conditions, a high-contrast fly, such as one in black and silver, is usually most effective. —E.B.

Raised on an Iowa farm and then educated as a classical guitarist, Erin Block now works as librarian by day, writer by night, and a fly fisher and fly tier on her days off. Living in the mountains of Colorado, she and her dog Banjo roam the high country exploring alpine lakes and small streams as well as slog through mudflats and warm water ponds in pursuit of carp and bass along the Front Range.