Letting Go: Deciding the Fate of a Striped Bass That Took 15 Years to Catch 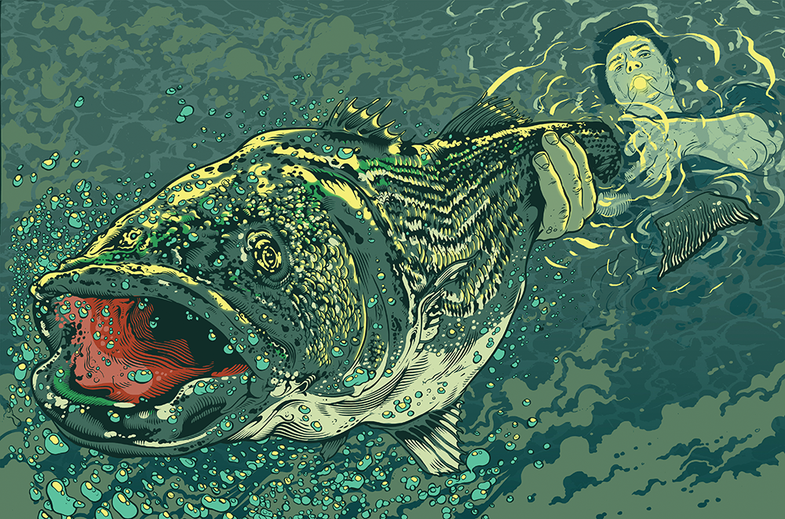 Striped bass don’t often hit a slow-­moving needlefish plug very hard. The strike feels more like the soft tap of a panfish rather than an attack from one of the Northeast’s most powerful gamefish. So as the gentle July Cape Cod surf swept my needle over the sandbar in front of me into a deeper cut, I could have easily missed the bump that came just before 3 a.m. Luckily I didn’t, because it had been made by the bass I’d been hunting for a decade and a half.

That hunt began on the Third Street jetty in Ocean City, N.J., on Dec. 8, 1999, when I was 15 years old. I had my hands tucked into my neoprene waders to guard against the early winter cold, watching my surf rod pulse in its sand spike, when it suddenly snapped straight, pointing right at the steely-gray sky for a second before bowing over. My heart was beating out of my chest. That striper only weighed 11 pounds, but it was my first, and the spark that lit my fire for the species.

Several years later, my parents gave me a painting of that jetty as a birthday gift. It hung in my room for a long time until I bought a house of my own in Massachusetts and put it above the mantel. While I’ve always loved the painting, I really considered it a placeholder for the decoration my house lacked—the mount of a surf-caught 50-pound striped bass.

I don’t know exactly when 50 pounds became the mark for striper fishermen. Some anglers trace it back to the 1950s, when Rhode Island–based Ashaway Line Co. offered a reward for stripers of 50 pounds or more caught on its product, and called it the Nifty Fifty Club. But I do know why it became the magic number. Fifty-pounders are rare but not unattainable. Every year a few dozen hit the scales at tackle shops from Virginia to Massachusetts, and a couple dozen more are caught and released with no fanfare. But thousands of dedicated striper fishermen go their whole lives without ever catching one.

Though I’ve released almost every striped bass I’ve ever caught, I planned on having my 50 skin-mounted. A striped bass of that size would be more than 20 years old, and nothing survives that long in the ocean without a damaged fin or tail, a scar on its flank, or a wound from a previous encounter with a hook. A fiberglass replica would never capture those details.

I first saw taxidermist Paul DeAngelo’s work at a fishing expo. The striper on display still looked wet with saltwater, the scales subtly glinting with purples and greens. Ever since then, I knew he was my guy regardless of price; getting him my 50 would require covering the fish in borax and shipping it express to his studio in Washington state. After I swung on that light hit, the needlefish’s hooks dug in, and my 11-foot rod bent to the grip. That’s when I wondered for the first time if the fish on the other end might be the one to make that cross-country journey.

When the bass began to shake its head out there in the darkness, the rod lifted and dropped violently. All I could do was hold on and hope the set was good. Once the fish settled down, it turned and began to swim down the beach with the current, peeling drag in an unbroken stream. The first run wasn’t very long, but when the striper stopped, I couldn’t move it. The braid began to whine in the onshore breeze as we sat locked in a stalemate.

Several years before, I’d had a similar take on a needlefish followed by big headshakes and a long, blistering run. Despite my being on a sandy beach with no obstructions to cut my line, panic had overridden reason, and I had twisted the drag knob clockwise. The fish had slowed momentarily before the line went slack, and I’d reeled in the plug and its two twisted treble hooks. This time I was confident in my drag setting, but when the fish began a second, faster run, I was tempted to tighten the knob.

Determined to remain calm, I held the rod high until the fish stopped and turned. At that point, keeping the line tight became my top priority. I pumped the rod, reeling quickly to store line when I could. The bass gave up ground slowly, shaking its head occasionally, but the fight was starting to turn in my favor. That’s when I felt a sharp pop, and my stomach dropped. I knew at least one of the hooks had pulled out, but for the moment we were still connected. For the rest of the fight, I’d have to be careful not to put too much strain on the hooks that were still planted. Every time the fish changed direction, I felt like I was going to throw up.

It may sound crazy, but I didn’t want to catch just any 50-pounder. It had to be the right 50. I always dreamed that I’d hook it while fishing alone, not on a crowded beach in the middle of a blitz. I wanted it to come from an area I decided to fish based on my own experience or a gut feeling, not following another angler’s lead or chasing a report. When I finally worked the striper into knee-deep water, I realized all my criteria were met. Even in the dark I could tell the bass was more than 4 feet long. At its widest point, it was as big around as a basketball. I could fit my whole hand, fingers splayed, inside its open mouth without touching the sides.

When I flicked on my neck light, I saw that the plug’s thick tail hook had started to bend open but still held in the top of the fish’s mouth. One prong of the belly treble had snapped off—the pop I’d felt during the fight—while another sported a single striper scale. I clipped my Boga Grip to the fish’s lower jaw and strained to lift it clear of the water. When I focused my beam on the Boga’s scale, it read 54 pounds. I only got to double-check it once before tears blurred my vision. Part of it was euphoria, and the other part was sadness that a 15-year search full of hundreds of sleepless nights across five states had reached its end.

The fish would look fantastic above my mantel—huge mouth agape, gills flared—but as it thrashed in the shallow water, I knew I couldn’t do it. I couldn’t drag that striper onto dry land and let it die. Instead, I unhooked the bass, grabbed its lower jaw, and waded it back into the surf. After almost a minute of my gently rocking it back and forth, it began to kick its tail, slowly at first, then violently as it tried to free itself from my grip. I held on a few seconds longer than I needed to. When I finally let go, the fish hung motionless for a moment, and then, in two powerful beats of its massive broom tail, it disappeared from the beam of my flashlight.

The painting of the Third Street jetty in Ocean City, N.J., still hangs over my mantel as a reminder of the first striper I ever caught. And now, directly below it, sits a needlefish with bent and broken hooks—one piercing a quarter-size striper scale—that reminds me of the one I may never catch again.