Guiding on the Great Lakes is not much different from guiding on the ocean. This is big water, and to stay on high-­caliber walleyes, Ross Robertson knows he has to adapt to ever-changing conditions. 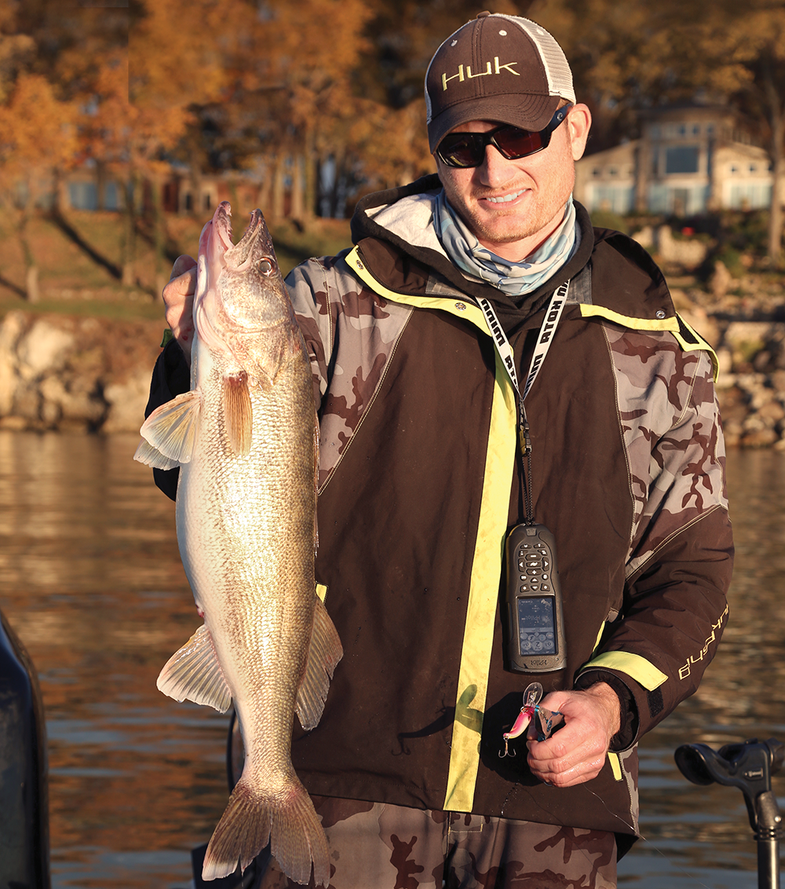 On the Best Walleye Great Lake: “Due to its sheer number of fish, Lake Erie is definitely the best Great Lake for big walleyes,” says Robertson. “Erie is the southernmost and also the shallowest, which means we tend to have longer seasons and warmer water than the rest of the lakes. In turn, that also means a longer growing season. The other thing to remember about the other Great Lakes is that their good walleye fisheries tend to be isolated in particular bays, but Erie produces from one side to the other.”

On the Season You Live For: “Fall, without a doubt, especially when we’re talking night fishing. That time of year, most people are chasing deer and ducks, and the vast majority of recreational anglers have stored their boats away. This works for me because I hate boat traffic. Leaves are dropping, ice is starting to form, and if hearing walleyes splash in the dark as they chase bait on a shallow reef doesn’t fire you up, you need to check your pulse. The conditions start to get dicey. You never know if you’ll make it out on a given day this time of year, but that makes it an adventure.”

On Mastering Big Water: “To catch big fish on big water, you have to put yourself in the right location. Sounds simple, but it’s just like deer hunting. The bigger fish are much easier to predict and catch in coldwater periods. They also tend to be closer to shore. The warmer it gets, the deeper they go and often move to areas where they are much more difficult to pattern. The reality is, a big lake fishes very small when it comes to trophy hunting. I rely on my GPS way more than my sonar once we are on fish. Naturally, you have to put in your time to learn the craft, but my biggest piece of advice is to stay away from the pack. If you follow the crowd all the time, you’re not going to catch as many big walleyes as you would putting your own pieces together.”

On What It Takes to Guide the Great Lakes: “The Great Lakes are nasty, and as a client once told me, ‘Erie is like heaven and hell, and sometimes both, in the same day.’ Everything you do on big water needs to be planned out. Your boat and gear need to be modified to handle it, and realistically, you still aren’t going to be able to get out as often as you want. Figuring out a bite in tough weather or terrible water clarity when everyone else gives up or doesn’t go is a real smirk-maker for me. Catching a fish that you have to net as it pops out of the middle of a wave on a sloppy day is cool, but I have to admit those days are getting fewer and fewer for me. My tolerance for getting beat up wanes every season after putting in so many years.”

1. When choosing a location and presentation, which of the following do you consider first?

“The more you know about the species you’re trying to catch, the better your chance of finding them. Your logs from previous seasons will save tons of time searching.” —Lynn Niklasch, Your Fishin’ Pal Guide Service

2. When trolling planer boards, which type of line do you use?

“With all of the forces involved in trolling—boat speed, current, planer-board resistance, and fish weight—monofilament provides the stretch necessary to land the big ones most consistently.” —Travis Hartman, Reel Science Charters

3. Which piece of boat-control equipment could you not live without?

“The technology in today’s bow-mount trolling motors is amazing. It’s like having another person in the boat. Autopilot, contour following, and spot lock give you a bigger advantage than anything else.” —Dan Hassevoort, Angler One Charters

4. If you’re fishing a spinner-crawler harness, your go-to blade size is:

“A No. 5 Colorado blade is pretty hard to beat. It puts out just the right amount of flash.” —Dan Hassevoort, Angler One Charters

5. If you could only use one lure for an entire season, what would it be?

“No matter the mood of the walleyes, I can get them to bite a crawler harness.” —John Hynes, West Shore Outfitters

6. When trolling spinners, what’s the best way to get them to the proper depth?

“You can get very precise with your depth using in-lines. If you’re targeting fish on the bottom in snaggy areas, bottom bouncers win. But other than that, in-lines fit the bill most of the time.” —Joe Okada, Joe Okada Outdoors

7. Which recent advancement in electronics has been most beneficial to your fishing?

8. What is your go-to crankbait?

“The Reef Runner’s unmatched searching action and hundreds of color options make it No. 1. They dive 30 feet on their own when pulled on 12-pound mono.”—Ken Nulph, Blacktop Charters

9. In which of these scenarios do you trust your instincts more than your sonar?

When fish are suspended high in the column: 40%

When fish are holding shallow: 20%

“Sometimes the fish can be so high in the water column you can’t even mark them, especially in midsummer. But you’ll see baitfish on the surface eating bugs, and trust me, the walleyes are usually wherever the bait is holding.” —Steve Paulsen, Walleye Madness Guide Service

10. Which is your preferred way to get a crankbait deeper?

11. Walleyes are known to be shy and light sensitive. What’s the shallowest depth you’ve caught them in consistently?

12. If the Colorado blade is the most popular on the Great Lakes, which blade style would you say is a sleeper?

“I think a lot more fishermen run willows than you think, but they don’t talk about it. One nice thing about them is that they can be trolled at higher speeds.” —Chip Cartwright, Silver Streak Outdoors

13. Which inland walleye tactic do you think has proved its worth on the Great Lakes?

“We’ve tinkered with slow-death rigging over the past few seasons. I can tell you for a fact it works. However, Lake Erie walleyes are big and there aren’t many heavy-wire slow-death hooks out there. Our fish will bend a traditional light-wire slow-death hook.” —Doug Straub, Blacktop Charters

15. Which of the following conditions is most likely to produce the best fishing on the Great Lakes?

“Any time you can get the surface light penetration broken up, it’s an advantage to the angler. A good chop will do that.” —John Hynes, West Shore Outfitters

Worst Excuse for Missing a Fish

“I thought it was a rock.” —Mike Hastings, Git Bit Guide Service

“My sunglasses are too dark.” —Rick Nyles, Sky Blue Outfitters

“I was guiding a woman, and she said she got her hair caught in the reel.” —Todd Kersey, Bass Online