How to Spot Redfish on the Flats, Even in Dirty Water

What to look for, and what to avoid, in skinny water. 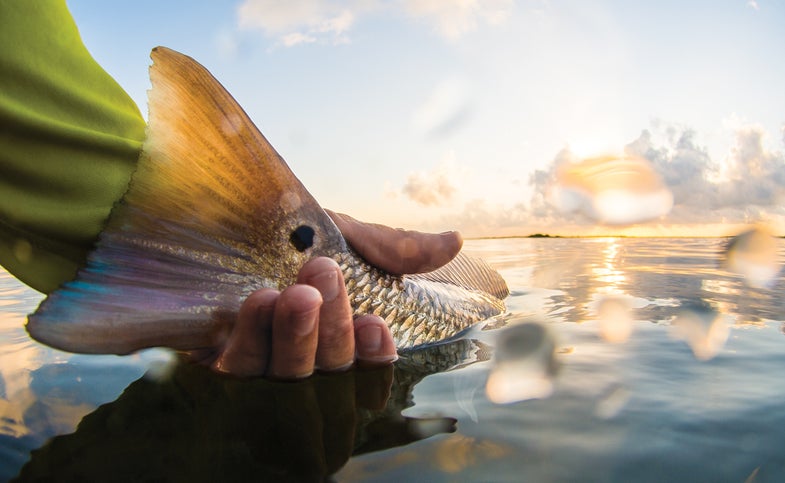 Stalking redfish in shallow marshes is a thrill, and when the water’s clear, you can spot them from a mile away. So what happens when the water is murky or stained? If you know the telltale signs of a red, it’s easier than you think to decipher what kind of fish are swimming in casting range.

WHAT TO LOOK FOR

Broad V-Wakes
➞A guide I fished with once likened a redfish to a fire extinguisher being pulled underwater. There will be a distinct bulge in the surface made by the fish’s broad, blunt head, followed by a long, trailing V-shaped wake. Reds often swim very straight and deliberately, so if the wake is moving erratically, there’s a good chance it’s something else.

Tails
➞There’s no surer sign of a redfish than a gold tail with a black spot waving in the air. When reds grub in the muddy shallows for shrimp and crabs, they’ll angle their bodies down, and their tails break the surface. Not many other fish in a marsh feed this way, but if you do see another tail, just remember: no black spot, no cast.

Moving Grass
➞Other marsh residents, such as seatrout and jacks, typically feed in open water and deeper channels, whereas reds often hug grassy shorelines and flooded cane banks. They also swim into flooded vegetation to chase bait, so if you see moving grass or cane, there’s a strong possibility it’s a red hunting for a meal.

Wispy V-Wakes
➞If you see V-wakes on the surface that pop up quickly, move fast, and then disappear, don’t get excited. You’re probably seeing mullet. Though these baitfish can grow quite large and push a sizable amount of water, they move much quicker and far more erratically than a redfish.

Big, Sudden Splashes
➞These could be from redfish, but if they are, you’ll probably see another splash in the same area in short order. If you don’t, you’ve probably just seen a gar. Gar lie still as logs just under the surface, bolting away suddenly and creating a big splash when they get spooked.

Diving Birds
➞Birds are typically drawn in when fish attack a school of baitfish from below and drive it to the surface. Seatrout and jacks corral bait in this manner. Reds more often feed close to the bottom, so they’re not as likely to be the initiators of bird blitzes on the surface in a marsh setting.