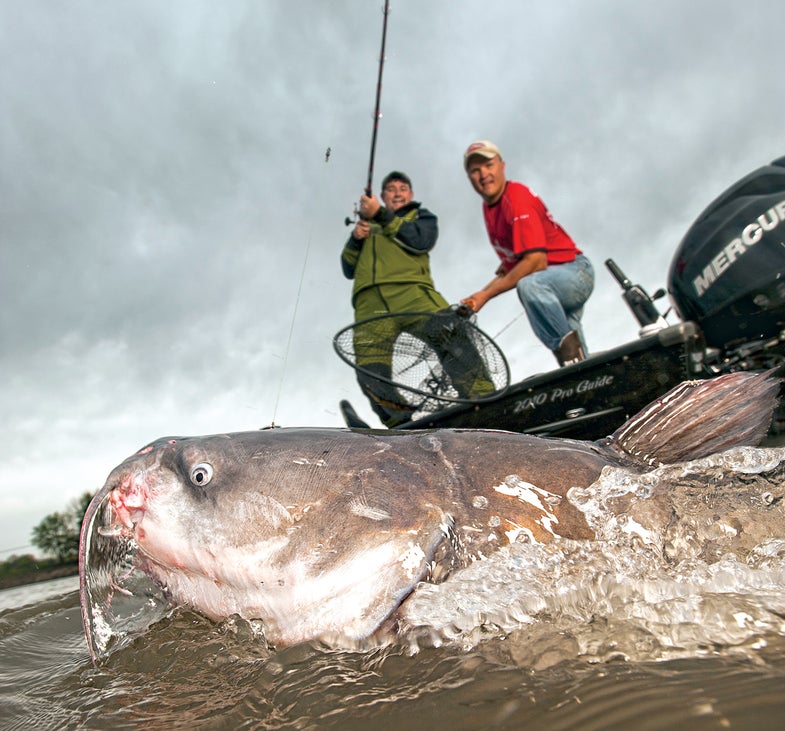 We bet you know the heartache of dropping a blue catfish. Truth is, it’s often your own fault. From proper prep work to fight techniques to end-game insurance, these tips from a pro will keep you from feeling that sting ever again.

“I don’t think people really understand the strength of a big catfish,” McIntyre says. “They see ready-made outfits marked catfish combo and buy them. You can’t expect to beat a large catfish with a reel that’s not up to the challenge. They’ll destroy the cheap stuff.”

THE FIX: Take a Long Drag
“The first element of a good catfish reel is the drag. It has to be strong and able to handle a lot of pressure, especially if you fish rivers. I’m a big fan of the Abu Garcia 7000 series. Not only do they have good drags, but they hold a lot of line. Line capacity is something else people don’t worry about enough. I want a reel to hold at least 250 yards, and many times I’ve been glad I had that much.”

“Guys hook into a big catfish and immediately lift the rod to fight. Conventional wisdom might tell you to do that, but a big fish is going to fight differently than a small one. In moving water, high sticking is going to pull the fish straight to the surface. The rod and line already have a lot of pressure on them. Quite often, when a big cat breaks the surface, it starts rolling with its mouth open. That creates even more resistance, and the quick increase in pressure is enough to break the line.”

THE FIX: Place a Side Bet
“I fight big catfish with the rod to the side and the tip anywhere from 2 to 10 inches off the water. This rod angle does a couple of things. First, if the fish is in cover, it helps pull the line and fish out and away from it instead of up, which increases the chances of the line rubbing off. Second, a low rod angle helps keep the cat’s head down. This is critical near the end of the fight because you don’t want the fish rolling on top.”

THE PROBLEM: Jumping the Gun

“One of the biggest mistakes I see anglers make with a big catfish on the line is trying to net it too early and too quickly. Most commonly, the angler will get the fish near the surface, but the net man won’t be ready. Then he splashes the net fast and upcurrent of the fish. The water blows the net right back into the cat. When that happens, there’s a good chance the hook will pop out or the line will snap right off.”

THE FIX: Harness Some Water Power
“I like to use the swivel as a marker for when the net should hit the water. As soon as I see it, I want the net man to gently dip the net so the bag is in the water when it’s time to scoop. Most important, the net should always be downcurrent of the fish, so you end up using the current to your advantage. As soon as you have the catfish close enough, just lower the rod down a bit, and the water should slide the fish right into the waiting hoop.”