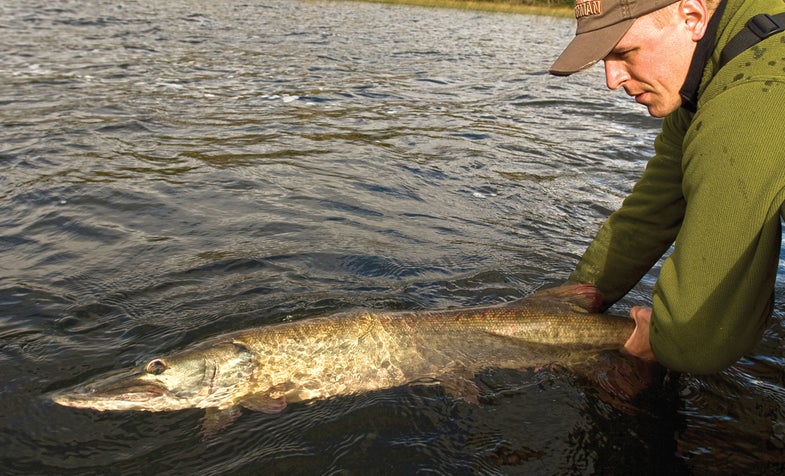 We bet you know the heartache of dropping a huge muskie. Truth is, it’s often your own fault. From proper prep work to fight techniques to end-game insurance, these tips from a pro will keep you from feeling that sting ever again.

“One thing I see a lot is guys showing up to fish with brand-new gear,” says Stevenson (mighty​musky.​com). “But no reel comes out of the box ready to fish for muskies. Too many anglers simply don’t take the time to prep their gear because they’re in such a hurry. A drag that’s too loose may not matter when you’re retrieving big lures all day, but then a fish finally hits, the rod doesn’t bend when you set, and you never get the hooks planted.”

THE FIX: Lock It Down
“On my reels, the drag is locked down to the point where you can barely pull it out without wrapping the line around your hand, because people go into shock mode when a really big muskie eats a lure. I’ve seen clients freeze up when a giant fish hits. They never set the hook at all, but with the drag locked, when that fish turns or head shakes, the odds are much better that the hooks will dig in. The tight drag essentially sets the hook for them.”

“I talk to a lot of guys at my tackle shop. They’ll come in to buy a certain lure because it moved so many fish. I always ask, ‘Well, how many did it hook?’ If the answer is ‘None,’ then you need a different lure. Most of the time, if a fish moves or follows without eating, an angler will bomb the area with the same lure over and over trying to get it to come back. Sometimes it works. Often it doesn’t.”

THE FIX: Throw the Changeup
“I do believe in the throw back, but you’ve got to think about what you’re throwing. If I’m fishing a topwater lure and move a muskie that doesn’t take, I’ll let it rest for a few minutes and throw a similar topwater that is a size smaller or bigger but most importantly makes a similar sound in a different pitch. That’s often the trigger. With other lures, sizing up or down for the throw back is smart, as is changing the speed of the retrieve. I would try that before switching lure styles.”

THE PROBLEM: Being Set in Your Ways

“Muskies often eat close to the boat. You see everything go down, and because it’s visual and surprising, anglers often lose composure when they react. One of the biggest and most common mistakes is setting the hook in the same direction the fish is moving. If a big muskie is charging toward the boat when it hits, and then you swing toward the boat, all you’re doing is pulling the lure out of the fish’s mouth.”

THE FIX: Side Swipe
“I know it can be hard to remember, but if you swing to the side and away from the fish, your chances of a solid hookset increase dramatically. All you really need to do is make sure the force of your swing is countering the direction the muskie is moving. In a situation where for whatever reason it’s not possible to swing the rod sideways, swing downward. Do whatever you have to in order to make sure the lure isn’t moving the same way as the muskie.”