How to work your trout streamers wisely in the early spring. 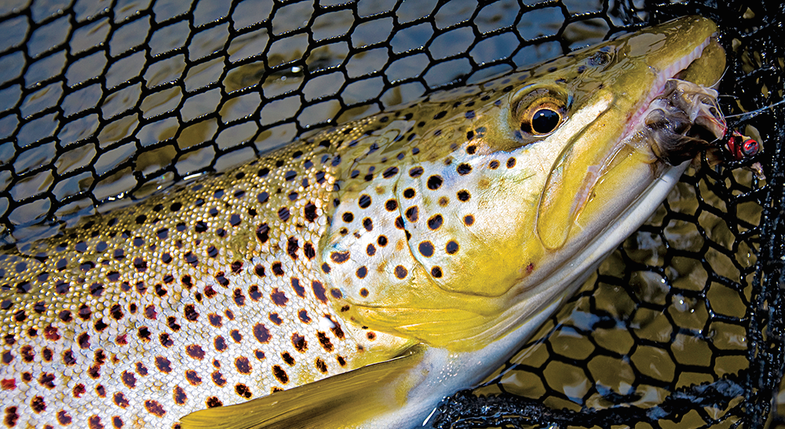 It’s no secret that streamers score big trout, but a fish’s willingness to chase one down has a lot to do with water temperature. In early spring—or any time the water is below 45 degrees—a big brown isn’t as likely to bolt 10 feet after your pattern; that doesn’t mean it won’t take a shot. The trick is picking the right streamer for chilly water, and then altering your presentation to get frosty trout to chew. Here’s the routine.

1. Drop and Wiggle
Streamers like the Zonker that have rabbit-strip tails are my go-tos in the early season. That’s because it takes very little movement to get that fur dancing. In fact, the current alone is usually enough to create some sexy wiggle. I also opt for streamers with weighted heads at this time of year, because I want them to sink into the zone quickly, and the tail action on the fall is often enough to induce a strike from a sluggish brown.

2. Hit the Soft Spots
Holding in riffle water requires large trout to expend a lot of energy when the stream is running cold. With that in mind, focus on soft spots that let heavier browns rest close to faster water without having to move much. Eddies behind rocks and logjams are prime, but any slower seams close to the bank can provide refuge in the frigid flows.

3. Keep It Tight
As soon as the fly splashes, lift your rod and keep your line tight. You’re basically high-stick nymph­ing your streamer, which effectively mimics a dead or wounded baitfish—easy prey. If this doesn’t score, make a second cast, and give the fly one hard strip and pause. The jolt often gets the trout’s attention, and it’ll eat on the pause.