Why Bobbing for Spawning Bass Is Serious Business

Bobbing for bass may look simple, but there’s more technique than meets the eye. 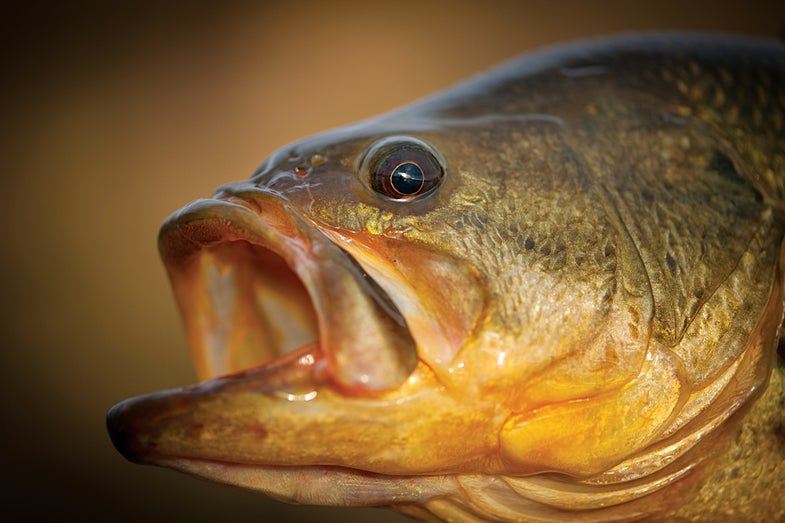 My rig crashed the flat water with more splash than a fat kid’s belly flop. There’s no finesse in slinging a pound of tackle in 3 feet of water—but then, finesse is for Madison River dry-fly hatches in July, not the largemouth spawn in Florida.

Joe Coogan lounged on the boat’s rear seat, his crusty Topsiders crossed atop the Ranger’s gunwale. He held his reel in his lap, rod tip down. His slackened line coiled on the water’s surface. Shadowed by a hat brim, aviator sunglasses, and a burka-like head gaiter, he would have looked rather suspicious, but I knew better. Likewise, I slouched on the front pedestal, beer at the ready, minding my bobber as it worked through saw grass. I spat sunflower seeds and jabbed at Coog for his strange history of snapping selfies with my fish and posting them to Facebook.

Other anglers might have mistaken us for a couple of bluegill fishermen enjoying a day off work. But they’d have been wrong: Beneath the touristy disguises, our jaws were clenched in determination. In our hands weren’t cane poles but broom-handle Falcons fixed to Calcuttas with the drags cranked tight. At the terminal end of each spool of 25-pound fluorocarbon was a big, oval-shaped foam float that suspended a 5/0 Lazer TroKar Kahle hook rigged to a 5-inch golden shiner. Coogan and I had traveled here, to Florida’s famed Lake Okeechobee, for one reason: to catch giant spring bass.

Bass With a Capital ‘Bee

Lake Okeechobee is one of the nation’s top producers of monster bass, and the fact that many of its trophies are caught on shiners in spring is no secret. What is surprising, though, is that this relaxed style of bobber fishing may be the most productive way to land a trophy. The float keeps your bait in the strike zone, and the live shiner does the rest.

“We need wild shiners,” Coogan said. “These little hatchery dregs just aren’t cutting it.” Okeechobee in spring is one of those situations where you can’t really throw a bait that’s too big. Six- to 8-inch wild shiners may be more expensive, but they’re worth the investment if you can find a local tackle shop that has some in their bait tanks. And when you do get some, you must keep them healthy and rig them right, or they’re virtually worthless.

Some anglers swear by hooking live shiners through the dorsal fin, but I prefer to thread the hook through the bottom lip and out the nostrils. It keeps the bait livelier, and hooked longer. And unlike farm-hatched shiners, wild ones seem to be well aware that they’re the bait du jour, as they tend to freak out when a bass arrives. They also provide perceptive fishermen with a window into the water: If a wild shiner is calm for a couple of minutes, cast it somewhere else. If it’s nervous, stick around. A panicked shiner is a dinner bell to a bass.

Just then my bobber began trailing off, cutting a wake for deeper water. Like a catcher anticipating a steal, I positioned my legs for a massive hookset and reeled down on my slack. Every muscle rebelled against my mind to jerk that rod right there. I probably would have, if not for Coog. Decent fishermen know you should let a fish run with live bait—waiting until the bobber completely submerges before pointing your rod tip toward the fish while retrieving your slack. Only when you actually feel the fish should you set the hook. But having the discipline to wait for that moment is easier said than done. And even if you time it perfectly, don’t expect to land every fish. Coogan has caught fish all over the world, yet I still do the same coaching for him. It’s just courtesy among big-bobber bass fishermen. Plus, it gives your partner a feeling of partial ownership.

“Wait for it,” Coogan said, almost like a bird-dog trainer soothing a pup on his first point. Then, after a small eternity, he yelled: “Hit him!”

I set the hook and immediately felt the fish’s full weight. Moments into the fight I gained its head and cranked, soon playing it around the boat, where Coogan netted it. Coogan removed the hook and admired the Florida bucketmouth. Though it was a few pounds shy of my lifelong goal of a 10, it was another great bass of many that day.

For some, bass fishing is all about casting nonstop, dredging a worm over miles of bottom, or winning a weekend tournament. But for me, at least in spring, it’s bobber fishing with a good buddy on a calm day where there’s a legitimate chance for a once-in-a-lifetime largemouth.

“You’d never have caught him had I not held your hand,” Coogan said, as he hefted my bass outward into good camera light and flashed a cheesy smile. “You got your camera handy?”

TIP OF THE MONTH: Swimming Lessons