How to Gear Up for Pike on the Fly

Looking to get after pike on the fly? Here’s the essential gear to get you started. 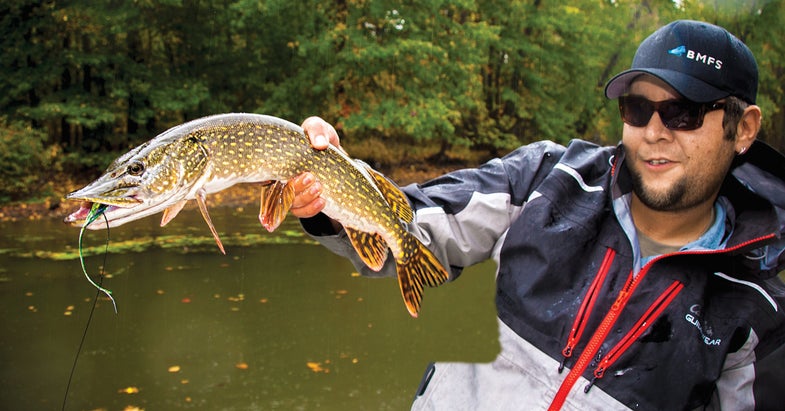 Five years ago, carp were flyfishing’s in-thing. Today that craze is simmering, while pike and muskies are boiling over. Almost every time I scroll through my Facebook feed, I see a picture of someone’s new muskie pattern, or a friend mugging it up with a pike that has a mouthful of feathers. I guess I’m trendy, too, because I’ve fallen head over heels for toothers on the fly, particularly northerns. It’s not that I’m anti-muskie, but pike, well, they eat a lot more often. My addiction has taken me from dirty local backwaters to pristine lakes in Saskatchewan, and the more I profess my love, the more gear questions I get about pike on the fly. So let’s set the record straight. Here’s a breakdown of what you need—and what you don’t.

Do you anticipate hooking a lot of pike that measure 40 inches or better? I certainly don’t on my local waters, which is why I’ve come to lean on a 7-weight rod. It’s got the backbone to deliver large flies, but it doesn’t overpower the common “hammer handle,” and it’ll put big momma in the net if she eats. Don’t listen to the people who say a 9- or 10-weight is the way to go. Likewise, an expensive reel with a drag that’ll stop a 200-pound tarpon is pointless. Pike are not brute fighters (neither are muskies). It’s the explosive eat that’s the rush. After you set, don’t expect to see your backing.

The majority of good pike fishing will be found in less than 10 feet of water, but I never use a full-floating line unless I’m casting a popper or other surface fly. I’ve found that a clear intermediate sink-tip has much more benefit. First, it lets you keep a fly hovering just above the weeds, even in shallow water. More important, that tip helps get flies with some bulk under quickly. With a floating line, you may need to strip five times to submerge a deer-hair fly, in which case, you may pull that fly right out of the zone. Heavier sink-tips are useful in certain situations, but if you make them your go-to, you’ll often end up collecting more salad than pike.

You may be tempted to buy fancy tapered leaders with a built-in bite wire. Save the coin. If you’re using a sink-tip, you don’t really need a tapered leader at all. Just cut a 6-foot length of 30-pound fluorocarbon. I like to add a 1-foot length of tie-able wire to the end with an Albright knot. But if that’s too much work, pick up a cheap pack of pre-tied saltwater steel leaders—the ones with a barrel swivel on one end and a snap on the other. Some will argue that these will turn off wire-shy pike. That’s probably true in some locations. I just haven’t found one yet.

You might wonder how I can cast big, broad flies with mountains of hair and plant them in a pike’s mouth with a puny 7-weight. Easy—I don’t use those flies. In the muskie game, yes, bigger is usually better. But I’ve thrown the giant stuff for pike in Canada, and the truth is, it didn’t catch bigger fish than the smaller, more manageable flies. If you’ve got some simple 6- to 8-inch streamers with long rabbit-strip tails and a bit of flash—often called snake flies (above)—you can catch just about any pike anywhere.

If you’ve ever tied a glass rattle into a fly or jig, you know it’s a pain. They add bulk and often break. Thanks to Bayou Rattler Sonar Ballzz ($1.79 for five; Hog Farmer Baits), adding a little buzz to jigs, rigs, and flies is a cinch. These 6mm beads have built-in chambers that hold six tiny ball bearings. Slip one (or three) between sections of an articulated streamer, work them into a Carolina rig, or add them to a hair jig via a mono loop. Then just rattle your way to more bites.