The rules of engagement for taking on a monster. 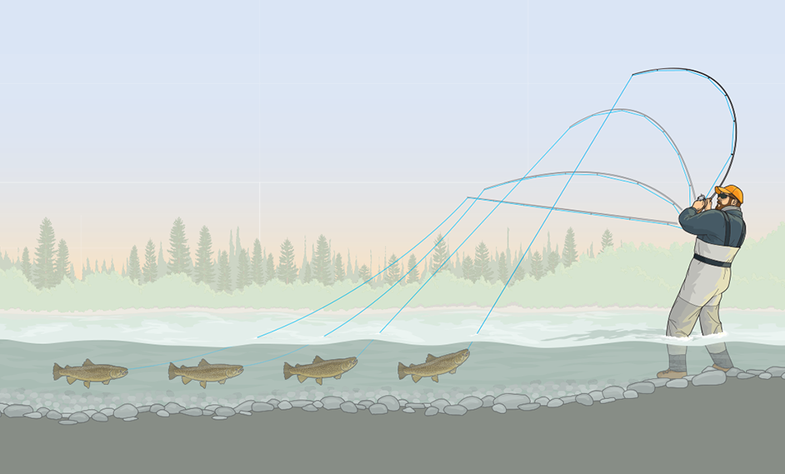 When fighting a big trout or steelhead in moving water, you want to have the upper hand from hookset to landing. If the fish is in control, it’s more likely that something will go wrong, and you’ll kiss your catch good-bye. Two areas that commonly trip anglers up are rod angles during a standoff, and staying tight when a fish runs directly at you at warp speed. Remember these tips, and you’ll win in both scenarios.

★ Whether a fish is taking line or holding its ground, digging in the current, it’s important to make sure your rod angle opposes the direction the fish is pulling. Even more important is making sure that rod pressure is steady and firm, but not overpowering. Put the proper angle in the rod slowly and carefully, not with a fast jerking motion, even if the fish changes direction suddenly. Trying to horse a fighting fish upcurrent is a recipe for disaster, but keeping tension on its head against the current will tire it (eventually). If you control the fish’s head, you’re in control of the whole show.

★ You can be in total control of a fish, confident that you are wearing it down. Then it turns and runs right at you. Out comes the hook. This can happen so fast that it’s tough to react. With slack being put into the line quickly and the fish coming straight on, reeling and swinging to the side to maintain pressure doesn’t always work. Instead, reel fast as you raise the rod overhead. You need to shorten the amount of line between the rod tip and the fish as fast as possible. Lifting the rod and getting line off the water as you reel will shorten that gap quickly, helping you stay tight until the fish changes direction again.