Catch Monster Walleyes this Spring with Crankbaits and Jerkbaits

Soft plastics aren’t the only plastics you need in your spring walleye arsenal. 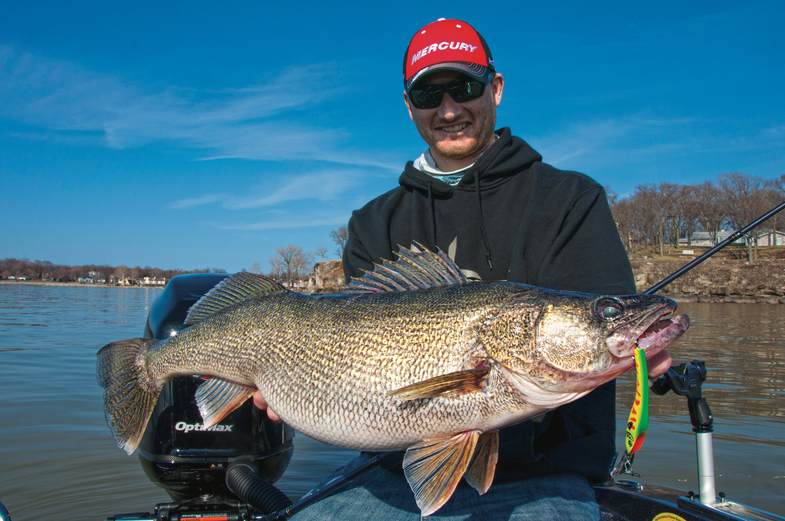 Most anglers think of soft-plastic grubs when it comes to plastics for walleyes. Me? I’m more into hard plastic in spring, because it’s easier to tailor crankbaits and stickbaits to the various stages of the spawn. Here are my go-to lures, as well as the tactics that get them producing trophy walleyes.

Perch and larger baitfish are the favored meals of the biggest walleyes prior to the spawn. Nothing matches these food sources as well as a crankbait. Trolling over deep flats adjacent to spawning grounds is often highly productive. Spread lures throughout the water column, giving particular attention to the baits running halfway down, which often get hit more than the others. It also pays to run a crank very high in the water column to target any walleyes basking in the warm surface water. Reef Runner’s suspending Skinny Stick is my No. 1 choice during this period, as it truly suspends and maintains action when trolled at very slow speeds.

Those in the know may be putting their boats in when most anglers are taking them out to head home. During the spawn, large females often stop feeding by day and get very spooky, making nighttime the right time for shots at these giants. Sneaking into shallow areas with a rocky or hard bottom, using just your electric trolling motor, sets you up for epic action after dark. Once in position, fan-cast shallow-diving stickbaits, such as the Rapala HJ12 Husky Jerk. If you’re not getting bit working slowly, switch to a slightly faster steady retrieve with occasional twitches of the rod.

Postspawn female walleyes tend to hold deep in the water column, which makes crankbaits the best option right after the spawn, especially since spring runoff often dirties the water. You need lures that dive to

depths in excess of 20 feet without assistance but don’t need to be trolled quickly to work effectively. The Reef Runner 800 is my top pick. Many anglers troll these lures with heavy snap weights, but I’ve found that using the lightest weight you can get away with while still reaching your desired depth catches more fish, as it won’t change the action as drastically.