Fish, drink, repeat. It's the mantra for many a trout bum, and it may as well be the Oregon state motto. No place else can claim the staggering number of craft breweries as found here, and most are just a cast from waters filled with trophy trout. The city of Bend serves as the starting point for an epic brew-and-trout road trip. Just remember to be responsible and take turns as the designated driver. 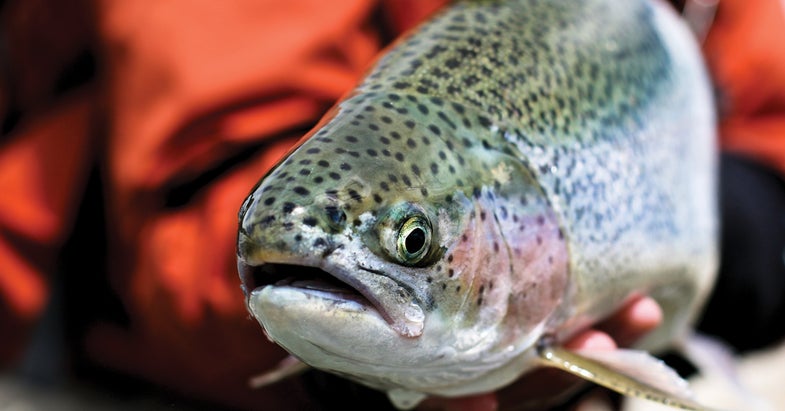 Want to enjoy your best summer ever? Then load up your car with tackle and camping gear for an unforgettable fishing road trip. We’ve dreamed up seven D.I.Y. road trips—all packed with amazing country, great food, and out-of-this-world fishing. You can send us a thank-you postcard from the road.

Go on a ‘Bow Crawl through Oregon to enjoy some of the nation’s greatest trout waters and craft beers.

1. Shoot the Deschutes
There are more than 20 breweries in Bend, including the craft beer mecca—Deschutes Brewery. At the Bond Street Public House, the taps flow with legendary brewmaster Gary Fish’s most famous beers. While you’ll never have a fresher Black Butte Porter, order a locals-only favorite instead like the Oatmeal Pale Nitro.

2. Crane ‘Bows
Wild rainbows grow fat in Crane Prairie’s fertile waters, and hooking into a fish exceeding 5 pounds is not uncommon. The shallow lake warms quickly in the summer, driving rainbows into the many submerged creek channels winding through the lake. Use a depthfinder or consult a good lake map to find these, and you’ll find fish. To catch them, key on the daylong Callibaetis hatch with a Gold Ribbed Hare’s Ear nymph.

3. Pint-Size Trophy
Even when the fishing’s tough, I guarantee you can get your hands on a 20-Inch Brown…at 7th Street Brew House in Redmond. The brown ale is malty and smooth—the perfect accompaniment to the pub’s onion-smothered burger or beer-battered fish and chips.

4. Canyon Camp
A multiday float down the Lower Deschutes puts you in the middle of some of the West’s best, and most remote, waters where you can catch the beautiful redband trout. With their crimson-streaked flanks and fighting spirit, redbands readily eat during the early-­summer salmonfly and golden stonefly hatches. Hire a guide from the Fly Fisher’s Place to row you down the river.

In Oregon, small breweries come and go, but a few last long enough to gain a national following. The Full Sail Brewery, in Hood River, has been making craft beers as long as anyone in the state and was the first to market bottled craft beer to a wide audience. You can pick up a sixer of its Amber Ale or Cascade Pilsner anywhere in the region, so opt for one of its exclusive cask beers at the on-site pub to get a taste of the future of Oregon’s brews.

6. Summer Steel
In early summer, the wild steelhead stack up just below Bonneville Dam, kick-starting the summer season for chrome. The Pacific still exerts its influence here, pushing steelhead closer to shore when outgoing tides are running strong. Bank fisher­men can do well plunking Spin-N-Glos tipped with sand shrimp into the shallows.