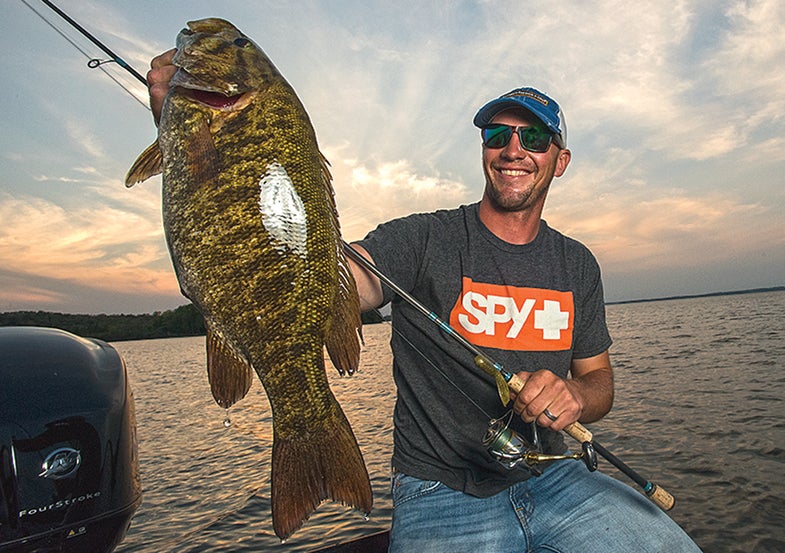 A serious smallmouth fisherman often has a deck full of rods and lure compartments filled to the brim when he leaves the boat ramp in spring. This time of year, it’s easy to overthink things and get caught up in bait choices. It’s true that a wide array of lures can produce now, but if you want to do more catching than thinking, never leave home without these three baits.

○ Jerkbaits are fun to fish and highly effective. They’re also the perfect tools for locating fish, as they’ll draw active feeders in from a distance. In the early season, I prefer suspending jerkbaits, which stay in the zone when paused. Crushing blows that come on a fast jerk are exciting, but don’t be afraid to pause for more than 10 seconds between twitches if the fish aren’t committing. I’ve learned that downsizing your baits can greatly increase the number of strikes you draw in spring, so head out armed with lures in the 3- to 6-inch range.

○ The ability to twitch a bait in place is a huge advantage when you’re trying to fool lethargic early-season smallmouths. Even if the fish aren’t actively feeding, keeping a bait dancing at eye level will often annoy a smallmouth into striking. Pay close attention to your line diameter; downsizing from 8- to 6-pound-test can make a huge difference in the number of bites you’ll get. Small baitfish-imitating soft plastics with plenty of tail wiggle—such as a Zoom Fluke—produce best.

○ Soft-plastic swimbaits have become smallmouth staples across the country, even outshining classic lures like the spinnerbait on many bodies of water. Much like jerkbaits, swimbaits, such as Bass Pro Shop’s Sassy Sally, attract fish from a distance, but they have a lot more versatility. When fish are aggressive, you can increase the retrieve speed and work in some quick pumps of the rod tip to trigger bites. For fish that are slow to strike, you can crawl a swimbait across the bottom while imparting short hops. These baits fish best on a jighead.