To step up your topwater bass game, try bombing a meaty rodent. 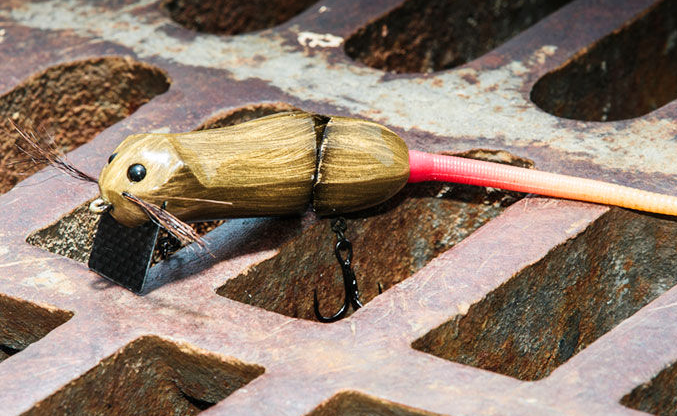 Many bass anglers take one look at a life-size topwater rat lure and see a gimmick. But those who know better see a secret weapon. They understand that bass are genetically programmed to recognize small mammals as food—regardless of whether or not the bass they’re casting to has ever laid eyes on a live rat swimming overhead. Once you embrace that fact, the idea of throwing an 11-inch plastic rodent on the local pond suddenly doesn’t seem so silly. For serious topwater blowups, here are three meaty rodent lures to chuck this season.

Here is an affordable rat with killer swimming action, by design. Siemantel, a pro angler and legend in the bass fishing world, and a pioneer in the swimbait craze that started in California in the 1980s, recognized that most of these custom baits were too expensive for the common angler. So he set out to create an affordable rat, unleashing the BBZ-1 in 2014. He spent years getting the action right, even studying the way live rats swim with some donations from a friend who was buying them to feed to his pet snake. To date, this lure has taken bass up to 17 pounds, and Siemantel largely attributes its potency to the extra-loud knocks it makes when swimming, and its ability to walk, wake, and even dive.

Bryant tailored the Vole to specs from pro angler Gabe Bolivar, who was looking for a rodent wakebait that would trigger heavy bass during tournaments without turning off the smaller fish needed to fill a limit. So he set out to make a durable bait that has a subtle action when retrieved at slow speeds but also swims well when pulled faster. He used hand-poured polyurethane for toughness, along with carbon fiber for the bill. On most rats, the joint is V-shaped with the point facing the lure’s head. Bryant reversed that design in order to have the joint cup more water as it moved, which he says worked wonders for increasing the -seductive tail action.

The Matte Rat is a first for Schmidt, who has spent most of his career designing flies for Umpqua but has been a closet hard-bait maker for 30 years. He’s now decided to jump into the custom-lure game full-​time. Schmidt’s goal was to build a rat that weighed less than 2 ounces, and he achieved that by making the baits out of balsa wood, applying a very thin (but very hard) epoxy coating, and using tungsten powder for weight. Always intrigued by the mechanics that animate lures, Schmidt meticulously engineered the Matte Rat so it turns slightly and “looks over its shoulder” on the pause, which he believes is a natural tendency of a scared -mammal that -accidentally ends up in the drink.

Be sure to check out The Rat Pack for the full scoop on rodent topwater lures.