We tested 60 new fly patterns to find the top 20 that belong in your box this season. 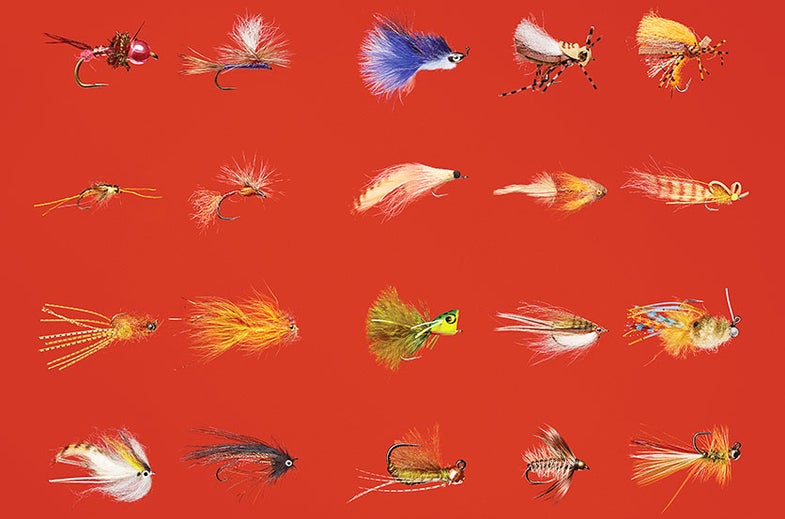 Every year, a handful of major fly retailers vet thousands of new submissions from hopeful tiers looking to go -major league with their patterns, but only the most innovative wind up in the catalog. Even after the cut, we’re talking about hundreds of new offerings. But you won’t have to weed through them all. I asked the three biggest players—Orvis, Montana Fly Co., and Umpqua—to pony up the 20 new flies they were most excited about. I evaluated all 60 in a test tank, then on the river, to peg my 2016 favorites for trout, bass, inshore saltwater fish, and more.

Montana Fly Co. and Umpqua do not sell flies directly to consumers, so you’ll need to track down their patterns at your local brick-and-mortar fly shop, or on the website of a shop that carries them. Orvis’s new patterns, however, are all available at its website (orvis.com) and range in price from $2.75 to $6.

1. Montana Fly Co. Allen’s Holla-Back Girl
It may be teeny, but this nymph sparkles bright on the drift. Anyone who knows the power of an old-school Lightning Bug as a dropper will understand the Holla-Back Girl’s potential for finicky trout.

2. Montana Fly Co. Carlson’s Purple Haze
It’s just a giant Parachute Adams with a purple body. But heavy floss adds serious durability to a fly that will get chomped often. Something about the color purple just turns fish on.

3. Montana Fly Co. Coffey’s Sparkle Minnow
Its rise-and-fall action will get the attention of any species that’s turned on by a sparkly, chubby baitfish. Although this fly is designed for freshwater, the hook is stout enough to play in the salt.

4. Montana Fly Co. Donkey Kong Hopper
An extra-thick foam head and collar make this hopper practically unsinkable, and the hook rides low in the water, well below the foam, which should mean fewer swings and misses during hopper season.

5. Montana Fly Co. Saliga’s Low-Rider Goldenstone
It splats nicely, and the splayed legs and thick foam body give it a monster profile. Its real genius, however, lies in how low the hook point rides. If a trout merely kisses this fly, you’re hooked up.

6. Montana Fly Co. Strolis’s Shimmer Stone
With an incredibly lifelike appearance, high-gloss shine, and long, wiggling rubber legs, the Shimmer Stone is the most enticing stone in my box. Don’t hesitate to strip it in slow water.

7. Orvis King’s Tactical Outrigger Emerger
Synthetic fibers form flat, heart-shaped stabilizers—like outriggers—under the hackle to keep the top half of this emerger floating atop the film. I was skeptical, but it flat out works.

8. Orvis Mangum’s Sleeping Beauty
This Beauty dives slightly on a hard strip and hovers just below the surface. It should be killer for wary tarpon and redfish feeding shallow when subtle presentations are in order.

10. Orvis SCOF Tailer Trash
This shrimp’s puckered foam back keeps it riding high in skinny water and adds a touch of wake and gurgle on the strip to entice huge bull reds. Made of synthetic material, it should be durable, too.

11. Umpqua Ball Peen Craw
A simpler design than other craws, the Ball Peen shines in moving water because it gets down quick and flutters away on the fall. It looks great when stripped and has equally nice action on the drift.

13. Umpqua Froggy Bottom
This compact popper looks ho-hum at first. Look again. A large hook and a short marabou tail mean more hookups. It casts easier than other poppers, too, and makes lots of noise for a little fellow.

14. Umpqua Hud’s Bushwacker
The Bushwacker is essentially a small Deceiver tied on a wide-gap worm hook. With the point hidden in the material, I was able to run it cleanly through some nasty veggies.

15. Umpqua Lexo’s Pop Up Blue Crab
When a real crab is scared, it rears back, ready to fight. This fake is always ready. Extra-long legs grab the current and wave away to make the presentation even more realistic.

16. Umpqua Lunch Money Shad
It packs all the elements of a big streamer—bunny strip, rubber legs, and Laser Dub—into a delicious 21⁄2-inch morsel with great action and flutter. From crappies to trout to smallies, this bug will kill.

17. Umpqua Marks Goblin
The original Goblin was made to be swung in the current. Here, Umpqua has added material around the head to make an already killer fly equally effective on the strip.

18. Umpqua Nick’s Fat Caddass
A caddis pupa imitator, this jig-style nymph has a lifelike body with a juicy profile. It gets down quick and dances in the slightest current. Used as the bottom fly in a Czech-style rig, it should be lethal.

20. Umpqua Tungsten Junior Mint
It’s a Woolly Bugger in nymph form, so it should catch trout anywhere, anytime. Thanks to the up-eye hook, it bounces and wobbles whether dead-drifted or worked with subtle pops of the rod tip.