Every day for an entire week, the author and his fishing buddy took floatplanes to remote lakes where they caught trophy pike on flies and plugs, ate fried fish for lunch, and enjoyed spectacular scenery—all without another soul in sight. Talk about the best summer camp ever. 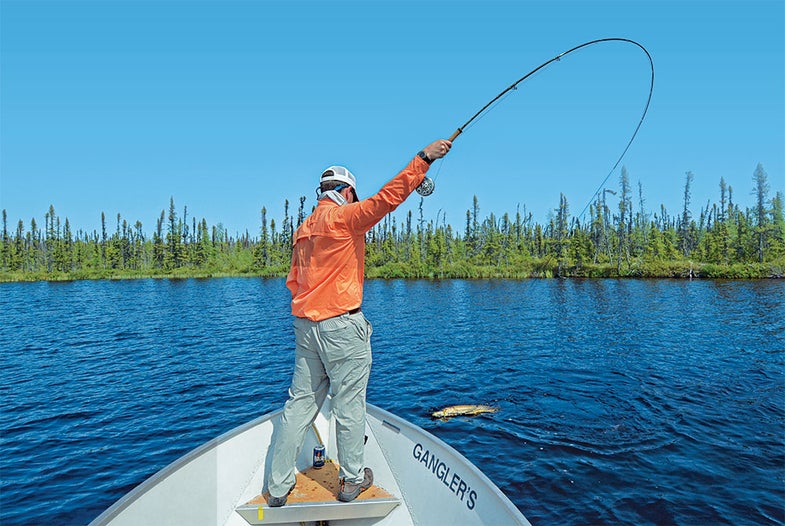 As the sky darkened and swells rocked beneath the strengthening wind, Napoleon led the charge.

My fishing partner, Bruce Holt, and I had arrived at the fly-in lodge in the late afternoon and wanted to fish a little before dinner. We’d landed a dozen or more pike—all hammer handles, none close to the sagging-bellied beasts you imagine when you come to Canada. Now, with daylight fading, Napoleon Denechezhe, our guide, wanted to try one more spot.

“Big fish there,” he said before jumping the boat on plane. His shades reflected whitecaps.

Napoleon killed the outboard when we reached a cluster of half-submerged boulders. Holt and I fired casts but could manage only a few reel cranks before the wind pushed the boat, and our lures, out of the zone. Napoleon repositioned us, and we cast again. This routine continued as we gradually circled the boulders. Ready to switch lures, I was rushing my retrieve when, midcrank, my reel handle halted so abruptly that it stunned my hand. The line tightened. The rod took a bow.

A short fight later, a stout 30-inch northern pike—dark-green flanks studded with mismatched gold spots, apex-predator camouflage—glided into the net. It was the biggest, and last, fish of the day.

As Napoleon took us back to the lodge, I marveled at what those scrappy pike had done to our tackle. There were shredded soft baits, frayed wire leaders, and chipped paint on brand-new Dardevles. Monsters, I thought. I tried to imagine the damage the really big ones would cause.

I couldn’t wait to find out.

Home for the next week was a small cabin at Gangler’s North Seal River Lodge (ganglers.com) in northern Manitoba. The agenda was simple: breakfast, fish, shore lunch, fish more, cocktails, dinner, bed. Repeat. If that’s not the ultimate fish camp, I don’t know what is.

On our first full day, the floatplane launched after breakfast, and once I felt confident I wouldn’t need the barf bag, I began to enjoy the ride. Below was an inimitable wilderness. Sun-kissed lakes transformed the landscape into an endless inkblot. Every last one was filled with thousands of trophy fish, and with the exception of the other dozen anglers at the lodge, Holt and I had them all to ourselves. Starting with Calder Lake.

We had fly rods rigged, but stiff morning winds forced us to keep them stowed alongside the gunnel. We threw swimbaits instead, and pike after pike rewarded the decision. The fish struck from the dark—hiding in grass or in the shadows of dropoffs. None were big, but the bites were coming so fast that we hardly minded. Already, in one evening and one morning, we’d caught more pike than most anglers would land in a season.

Around noon, Holt came tight to a nice fish. Napoleon guessed it weighed 5 or 6 pounds when it hit the net. This was the first fish of the day he did not release. This fish was lunch.

I’d be lying if I said I wasn’t as excited for my first ever shore lunch as I was for the fishing itself, and the longer I watched as Napoleon prepared the meal—filleting and breading fish, chopping potatoes and onions—the hungrier I got. I was the first to grab a plate. The fried pike was fresh and sweet; and served beside a mess of spuds, onions, canned corn, and baked beans, it was sinfully good. Conditions weren’t ideal for a picnic: The air was hot, and if you didn’t eat near the smoke from the fire, mosquitoes massacred you. Grub this heavy in a setting this unappetizing shouldn’t have tasted so fine. But it did. And so I was the first to grab seconds.

We digested by trolling. The bite was steady, as Holt and I traded strikes from small pike. I’m not much for trolling, and the boredom that comes with the tactic had nearly reached its peak when it felt as if my Dardevle had snagged a rock. The rod lunged forward, and I buried the butt in my stomach. The fish dove and made a run, peeling line. I’d caught some decent fish so far, but this was different. “It feels big,” I said.

The pike measured 43 inches and weighed 20-plus pounds. My arms trembled as I held it—not from the weight but from the sheer rush of seeing something so large attached to the end of my line. It was the biggest freshwater fish I’d ever caught. Maybe trolling isn’t boring, after all.

We trolled an hour longer, until the plane arrived to take us back.

On day three, we flew to Sprott Lake. The morning’s bite was slow compared with yesterday’s. Holt landed the only big fish—a 30-incher, which Napoleon released. As noon neared, we had no fish in the boat for lunch, and we were all getting hungry. Napoleon took us to another spot and told us to trade our pike rods for the walleye gear. I dropped a chartreuse jig down to the rocks and almost immediately hooked some lunch meat. I hoisted my walleye into the boat, then all three of us dropped jigs down again. And all three of us hooked up. We boated those fish, and jigged again, and tripled again.

Up to now, Napoleon had been as straight-faced and unreadable as a card shark, but he absolutely lost it over these walleyes. The man even hooted. “This is how I like to fish!” he yelled. Suddenly, I was grateful for the morning’s slow bite. Without those dull hours, this walleye mayhem, and the lunch that followed, wouldn’t have been nearly as satisfying.

After lunch came the fishing I’d hoped for. Napoleon motored us south to a bay that was out of the wind and where the afternoon sun had warmed the shallows. In the middle of the bay, loads of giant pike were stacked on top of one another. They looked like lumber levitating underwater. I grabbed the fly rod and stepped to the bow.

I don’t remember how many fish I caught in that bay—20?—but there’s one I’ll never forget. I’d just tied on a baitfish fly that resembled a rainbow trout and made a long cast. The pattern pulsed and darted as I stripped it back to the boat, until a northern flashed from the right and ambushed the bait. I strip-set the hook, and the 8/9-weight rod took a U-turn.

Come to Canada and personal-best fish almost become routine. This pike measured 40 inches—the biggest fish I’ve ever caught on the fly. After I released it, I noticed it had given me something to remember it by: On my left ring finger, the pike had drawn blood. Monster.

The lodge keeps 46 boats on 35 lakes. By the time we began fishing on Blackfish Lake, the bodies of water, and the days themselves, had started to run together. You cast and cast, catching fish after fish. You get into a zone, and you stay in that zone until a really big one—40 inches or more—knocks you out of it, because any fish smaller than that feels ordinary. You know that’s absurd. You’ll wish for just one 30-incher when you’re back home. Hell, you’d take a 25-incher. But you’re not home yet. For now, you still get to be spoiled, having your pick of 35 trophy lakes. So you cast and cast. You hope for a trophy. You stay in the zone.

Blackfish gave up lots of pike, but all were small. On the ride back, Holt asked Napoleon: “If you could fish any lake tomorrow, where would you go?”

Napoleon did not hesitate: “Atim.”

Loosely translated, atim is Cree for “dog s – – t.” At least, that’s what Holt and I were told after breakfast back at the lodge. I wondered if the name was a ploy to throw off other anglers since we’d heard the lake held some of the biggest pike of any at the lodge.

Holt and I had time to kill in the morning, so we each took a turn at the fly vise inside the lodge, where guests are invited to help themselves to various tying materials donated by other anglers. It had been ages since I tied a fly, and my lack of practice showed. Holt’s looked nicer, but not by much. He named it McUgly.

The first bay we motored into that morning affirmed Atim’s reputation. It was loaded with the largest pike Holt and I had seen all week. Trouble was, these fish were also the most stubborn we’d cast to all week. We couldn’t get any to chase our swimbaits, spoons, or flies. One fish in particular gave us fits. It looked about 50 inches long, and it wouldn’t budge no matter how perfect the presentation. “He might eat something different,” Napoleon told Holt. “Try your fly.”

Holt shot McUgly from the bow, leading the fish just enough so that the fly would sink to its level. The first cast was a bust, but he tried again. The water was clear and still; it was like dropping a fly into an aquarium. “For an ugly fly, it looks great in the water,” Holt said. He twitched the streamer—and the pike turned its head. He made another short strip, and the pike moved closer. As the fly started to fall, the fish rose and opened its mouth. Then it inhaled McUgly.

We went berserk—four-letter words, high fives, the works. The beast measured 47 inches—the trophy of the trip.

The rest of the day, we hammered fish everywhere, but during the few slow stretches, it started to sink in that the trip was almost over. With the floatplane due to arrive soon, we decided to finish the day trolling a spot near the rendezvous point. All week, we’d tried to land a fat lake trout, but every one we’d hooked had broken off. That streak continued with the first two strikes, and when my rod doubled over again, I had little hope of the fight’s lasting long, but Napoleon coached me through it. “Keep the line tight,” he said. When the fish landed inside the net, I think he was even happier than I was. “Big fish!”

Thirty-seven inches big—my best laker ever. Like many of the fish I’d caught this week, this one was the kind that makes you wonder how you got so lucky to get to waters so good. It was also the kind of fish that made you hope that, one day, you’ll come back.

We fished until the drone of an engine sounded and a shape emerged from the darkening clouds. Time for us to go back. Napoleon led the way.