Three Tips for Making the Most of Your GoPro

Don’t just strap a GoPro to your head. These tips will make you the Spielberg of fishing videos. 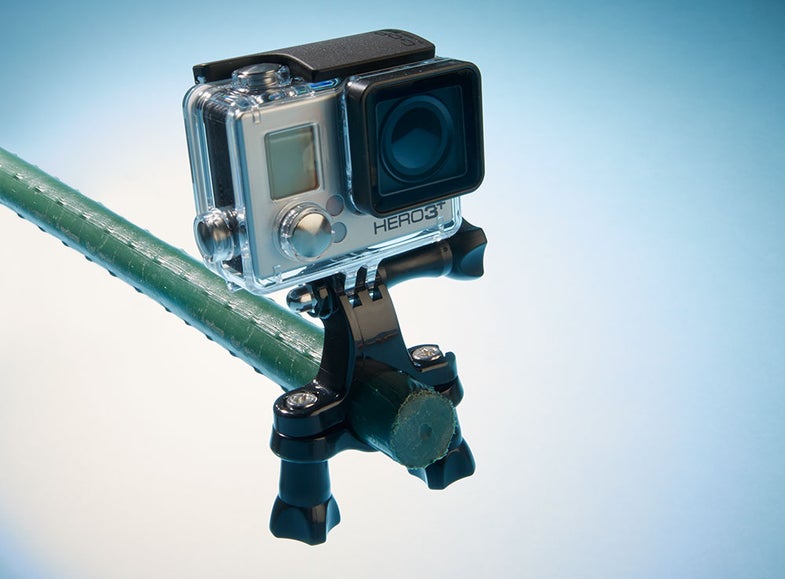 I’ve found that it’s easier to have a dedicated pole for this job.. Cliff Gardiner & John Keller
SHARE

The first time I saw a GoPro for sale in a tackle shop, I knew it wouldn’t be long before these tiny video cameras became nearly standard tools in the modern angler’s arsenal. Spend a few minutes on YouTube, and you’ll see I was right. But the average fisherman just straps one to his head and calls it a day. These three easy tricks will bring your videos up a level.

Everyone wants to nail that deal-closing shot. The problem is, most people put a GoPro on the landing net’s handle. Most of the time, it never makes it underwater where the action is happening, because the majority of fish are netted off the surface or just below. To make sure I get the right view, I mount my camera on the hoop itself, halfway between the handle and the front rim. In this position, thanks to a GoPro’s wide-angle lens, you’ll see the fish both during the last leg of the fight as it comes to the net and during that final gotcha scoop from underwater.

There’s nothing inherently wrong with putting a GoPro on your head, but you move your noggin a lot more than you’d think while casting or fighting a fish. If you can keep your head locked in one spot, great. If not, your movie might conjure nausea. The center of your body moves a lot less, so mounting a GoPro to your chest produces stabler footage. Don’t want to buy the expensive GoPro chest harness? Strap your head mount around your flyfishing chest pack. It works just as well, and makes the camera easier to put on and take off.

I’ve stuck a GoPro on everything from rod handles to gaff handles to oar handles to extend my reach and capture that perfect underwater shot of a fighting fish or piece of bottom structure. And I’ve found that it’s easier to have a dedicated pole for this job. Nothing works better in my experience than a 6-foot heavy-duty garden stake from Home Depot. It’ll cost you $3, it’s light, it can easily be trimmed, and the little nubs that help the stake stay firmly in the dirt also provide a surer grip for your camera mount.