As summer waxes and the water warms, smallmouths drift into deeper lies. 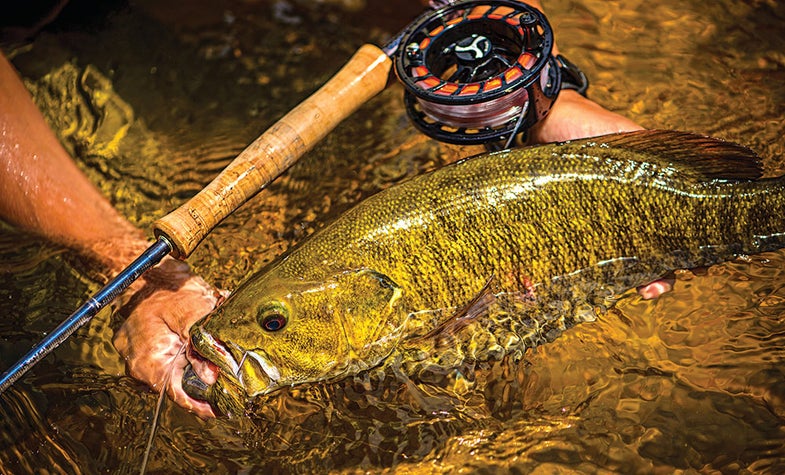 It was a family vacation to the Wisconsin Northwoods, and while I hoped to steal some time to fish, I’d packed only a bare-bones gear kit. So when I spotted a pair of big smallmouths patrolling a rock hump—I was poking around in the rowboat that came with the cottage—I had to mark the spot the way my dad had taught me: triangulation. A white boathouse, a lightning-scarred pine, and the wreckage of a duck blind gave me landmarks to reckon by when the lake glassed off that evening.

I rowed out after supper, a swell of anticipation rising in my chest with each pull of the oars. The lake, as I’d hoped, had gone mirror-smooth. I anchored with the sun at my back, knotted a chartreuse Dahlberg Diver to my leader, and began slinging casts. A loon yodeled nearby, raising the hair on the back of my neck.

Bent like a heron, eyes glued to that quiff of Day-Glo deer hair and rod pointed straight at it, I worked the fly in short glugs, pausing to let the ripples settle before twitching it again, the bug submerging briefly then bobbing to the surface when—

Or maybe it was Ka-boom!

The experience of having a heavy smallmouth blow up on a bug always puts me in mind of comic-book lingo. Those of us lucky enough to come tight to one of these brawlers also savor the next part: the slugfest that bends your stick to the cork and threatens to put your rod arm in traction. On this occasion, however, it was over before it started. As soon as the smallie felt the hook, it erupted from the water and came unstuck. The fish gave me enough of a look to establish its eye-popping dimensions—and make me ache for a rematch.

Among smallmouth anglers, the conventional wisdom is that the best topwater fishing comes early—May through mid June. To pin it down more precisely, during the spawn and in the weeks immediately preceding and following it. The bass are in the shallows then, making them easier to sight-cast to and more susceptible to surface presentations. As summer waxes and the water warms, smallmouths drift into deeper lies. This is when a lot of flyfishermen assume the window of topwater opportunity has closed and stow their bugs and poppers for the season—depriving themselves of some of the year’s most explosive action.

The person who opened my eyes to this was Wendel Dafcik, owner of Crow Rock Lodge on Ontario’s Lake of the Woods. Dafcik was my early mentor in the art and science of bass bugging. “Mid to late summer is my favorite time to fish topwater,” he told me. “You typically get a lot of warm, still, stable weather then, and under those conditions the smallmouths really orient to the surface. The big boys—the 3-, 4-, and 5-pounders—get active then, too.”

All true, but this time of year it’s crucial to concentrate your time on the water. Bugging during the middle of the day is just sweaty casting practice. It’s better to focus your efforts on the early-morning hours and, especially, the two hours before sunset. That’s when the bass—invigorated by the cooler water and emboldened by the lower light—move up to prowl rocky points, reefs, and shorelines. A few bulrushes or lily pads sweeten the pot, as does the presence of any kind of wooden structure. These fish hunt aggressively; they’re not choosy. When your bug gurgles into view and trips the smallmouth’s predatory trigger, all hell breaks loose.

That’s another thing about late-summer smallies: They fight like demons. In May or June, a bass would’ve given you just enough of a tussle to suggest what it’s capable of. Come August, that same bass will plain wear you out. A springtime smallmouth is a sparring partner; a summer smallmouth is a contender.

I’ve been talking about lake smallmouths; although river smallies are a somewhat different animal, they also get fatter, fitter, and more responsive to topwater presentations as summer progresses. They’re affected just as positively by stable weather patterns as still-water bass, maybe more so.

The leader and hook point both checked out. I dried off the soaked bug, and waited. A brood of half-grown mergansers skittered through the reeds in front of the ruined blind. The evening air was tightening, and I buttoned my shirt at the throat. After a while I stood up and started casting again. The fish I’d stung was unlikely to return, but maybe his partner would give me a whirl.

He did. This time, despite a display of acrobatic leaps and powerful rushes that left me shaking my head in awe, the hook held. The tape measured a hair short of 19 inches—about 41⁄2 pounds. I gave the fish one last admiring look before slipping it back into the water.

I rowed to the cottage in deepening twilight, lake and sky merging into one.

GEAR TIP: How Slow Can You Go?

When it comes to casting topwater flies for summer smallmouths, remember these words: Go. Slow. That’s the advice of guide Nate Sipple of the Tight Lines Fly Fishing Co. (tight lines fly shop.com) in DePere, Wis. “If there’s one thing I have to remind my clients to do, it’s to slow down,” Sipple says. “Let the fly hit the water and sit for several seconds, then give it a single sharp, definitive pop. Let it sit, pop it sharply again, and so on. The lower and clearer the water, the less you should move the fly.” —T.D.