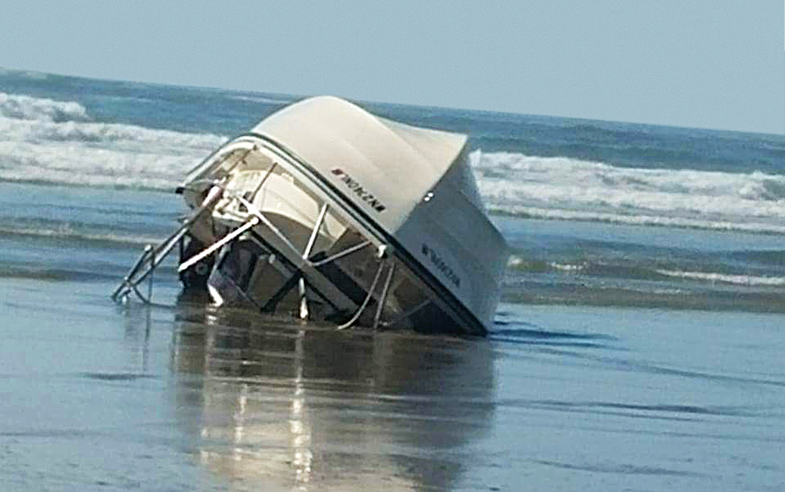 The fishermen clung to the overturned boat for nearly an hour before help arrived. Robin Butterfield
SHARE

In April, John Waring, 62, was fishing for sea bass with two friends when a rogue wave capsized their boat.

The conditions were perfect that morning as Mickey, Randy, and I headed out of Neah Bay, Wash. By 10:30, we were fishing about a mile from shore, when suddenly Randy yelled, “John, go!” I looked back to see a 20-foot wall of water coming at us. I grabbed the wheel, but before I could put the boat into gear, the wave slammed me into the throttle controls. It slung Randy into the sea and threw Mickey to the floor. The boat flipped completely but rolled upright again. I grabbed the radio and made a six-second Mayday call. Noise came from the other end, but I couldn’t tell whether anyone had actually heard me.

About five minutes later, a second big wave hit us, but this time, it flipped the boat completely. I was under the skip tower but managed to swim to the stern, where Randy and Mickey were. The water was 52 degrees, and we were shivering as we floated in our life jackets. We clung desperately to the overturned boat, but the swells made it hard to stay above water. I kept checking my watch. I figured that after 40 minutes, we’d be at risk of hypothermia, and not long after that, we’d be dead.

After 45 minutes, Randy was slipping in and out of consciousness. Then Mickey prayed for rescue—and less than a minute later, a helicopter appeared on the horizon. By the time rescuers got to us, we’d been in the water for more than an hour. Coast Guard personnel said people rarely survive as long as we did in water that cold. A lot of factors played into why we made it, but in the end, it was just a miracle. —As told to Charlotte Carroll