How to Catch Monster Muskies on Duckling Lures

Lures that imitate baby ducks have been around for a while, and though many anglers rope them into the gimmick... 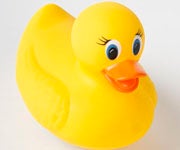 Lures that imitate baby ducks have been around for a while, and though many anglers rope them into the gimmick category, it’s a fact that big muskies feast on tiny ducklings. And even though serious muskie hunters seem to shy away from such lures, most will admit they’d love to catch a bruiser on one of these bobbing babies. Duckling lures will never replace gliders, bucktails, or jerkbaits in the muskie arsenal, but they still deserve space in your tackle box because these mini fowl can be surprisingly effective.

Gear to Dupe Duck-Hunting Muskies in Your Home Waters

You’ll want a shorter rod that will force you to make shorter strokes. St. Croix’s Mojo Musky series has a 7-foot 2-inch model ($140) that’s stiff enough to deliver a clunky duckling but just soft enough to let you finesse it across the surface. Match it with a reel spooled with 50-pound braid.

One of Persuader’s newer lures, the Black Bird Popper ($16) is made to look like a baby blackbird, but company owner Cliff Liddy says it’s a spot-on match of a young mallard. Work it with slight movements of the rod; the wings and mouth create more disturbance and wake for fish to follow.

Can’t find any real ducklings in the area? Pick up some classic rubber-ducky toys ($3), wrap them in mono with weights tied off to the ends, and toss them out as dekes. Cast your lure on the outside of the flock to make it look like the straggler. Will this actually work? I have no idea. But it sure sounds like fun.

Persuader’s Baby Duck ($16) adapts the classic style of a rubber ducky—and, as you can see, looks like the real thing. Hand-​painted and complete with real feathers on the back that are sealed in three coats of enamel, this birdy is tough as nails and moves in a subtle short walk when lightly twitched.

Learn how to tease a trophy muskie to the surface on the next page.

Bird Watching
According to Cliff Liddy of Persuader Baits, May and June are prime months throughout the country to fish duck lures because live ducklings are small enough for muskies to easily attack. By July in many parts of the country, ducklings have grown too large. Step one to success is scouting local waters and observing where ducks and their babies hang out most. Look in shallow bays and coves with an average depth of 10 feet or less. Areas with timber or reeds that protrude above the surface are ideal, as the structure provides shelter for the birds.

Help, Mom!
The trick to making a duckling lure look natural in the water, Liddy says, is making it behave like a bird that got separated from the family—which often happens on very windy days—and is frantically trying to find its mother. Achieving that action all comes down to some crafty, calculated rod work. “Baby ducks don’t move in a straight line,” he says. “And muskies know how a real baby duck behaves on the surface.” Attacks can come at any point in Liddy’s retrieval routine.

A – Make a long cast, but thumb the spool before the bait lands. A live duckling weighs very little, so you want the lure to touch down with minimal splash, as would be the case with a duckling falling off a log or the bank.

B – Gently twitch the rod from side to side to make the lure move left and right. Don’t overwork the rod, as ducklings don’t move quickly or abruptly. After you’ve covered about 8 feet, give the lure a long pause.

C – Before you move the lure again, dip the rod tip in the water to pull the front of the lure downward. This makes the lure’s bob more pronounced and helps mimic how a real duckling bobs, especially in a light chop.