Sonar on the Go

What to look for when picking a portable depthfinder. 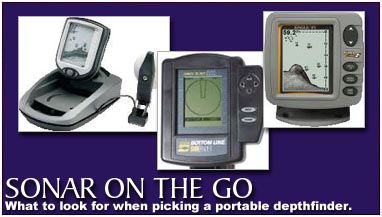 Small differences in features can make a big difference in performance. This season I used three portable sonars made by top manufacturers: the Bottom Line Fishin’ Buddy 2255 (208-887-2000; www.bottomlinefishfinders.com), the Eagle FishEasy 2 (800-324-1354; www.eaglesonar.com), and the Humminbird Piranha 4 (334-687-6613; www.humminbird.com). These spectrum-crossing models are priced at $279, $159, and $119 respectively, which reflects the different features and options on each. Let’s take a look at these units and their attributes and shortcomings as a way to understand what features to consider when shopping for a new unit. (For information about getting the most out of your sonar, see “Looking Down and Out” at www.fieldandstream.com.)

** Transducer Mounting**
Most portable sonars use a remote transducer (the part of the sonar that transmits signals through the water), which is attached via cable to the liquid crystal recorder (LCR), the display screen of the unit. The transducer is often mounted to the transom of the boat with a suction cup. It may take a while to get the transducer suction cup placed exactly right for maximum performance. Getting good readings while the boat is moving slowly is one thing. Doing so at high speed is more difficult. It is an inexact science, so take the time to adjust it right.

A more secure alternative to the manufacturer’s suction-cup mount is a portable aluminum transducer bracket, which is adjustable and clamps over the top of the transom. You can order these brackets from Cabela’s (www.cabelas.com); there is also a model for use on a pontoon boat, as well as one with an extension arm for holding the LCR case. You can also use such brackets on the gunwales of aluminum boats, although it’s often necessary to place a block of wood in between the gunwale and clamp to get proper vertical alignment of the transducer. Gunwale placement, however, often hinders good readings when the boat moves at high speed.

The Fishin’ Buddy has an adjustable clamp-on bracket that ensures good vertical transducer alignment and can be mounted on the transom or gunwale. The LCR head and transducer arm rest in the bracket and are removed for storage or when operating the boat at high speed. The bracket works well on most boats, although I had to place a block between it and the gunwale of my 14-foot johnboat.

Shallow Performance
If the transducer is installed properly, most portable sonars do a great job in water over 10 feet deep. Where they struggle, however, is with shallow operation, especially in just a few feet of water and where there are heavy weeds. False readings (like a constant zero or 299 feet), intermittent operation, and freeze-ups are among the problems here. If these happen often, it may mean that there is something wrong with the unit; an Eagle representative told me that a bad chip will cause this.

Anglers tend to overlook poor shallow-water operation, but it is very important. I recently used the Piranha on a shallow lake. A huge bay with murky water that I fished was predominantly 2 to 6 feet deep. Without the sonar’s working properly, I wouldn’t have located the deeper sections readily, nor found the submerged cabbage weeds that produced loads of walleyes. You can fine-tune most units to improve shallow operation, usually by going into manual mode, but you may sacrifice display quality.

**On Display **
The quality of the display you’re looking at is also important. I’m partial to big screens, but portables don’t have that luxury. All three of these models feature displays under 21/2 inches wide.

I used thesee three sonars separately and together, and found the FishEasy easiest to read under bright and low-light conditions. Its maximum digital depth indication was also best, and I could read it more easily from a distance. Keep in mind that when you’re in a store 2 feet away from a sonar in simulation mode, it’s not the same as when your eyes are 5 or 6 feet from the working display outside in bright daylight. And if you’ll be using sonar at night, dawn, or dusk, it matters how well the backlight illuminates the display.

Another important point: The tilt angle of the FishEasy display was fully adjustable. Standing up, I could position it horizontally and look directly down at it. The Buddy is always in the same fixed position, and the Piranha is not fully adjustable; you cannot look directly down at these units. These are details that you might not think about in a store but that become big benefits or drawbacks on the water.

The Piranha is said to get 25 hours out of its battery supply with the backlight on and 60 hours with it off, but it seemed to me that I got more than that, perhaps because of stop-and-go use. Unfortunately, you need a screwdriver to change the Piranha’s batteries. Battery installation was easiest with the Fishin’ Buddy, which also has a low-battery indicator-a great feature that is lacking on the other units.

True Portability
How portable you need the unit to be may be a big factor in the sonar you choose, as they vary considerably in size and weight (battery weight is not included below). The Fishin’ Buddy, for example, weighs 5.3 pounds and differs from other portables in having a long, self-contained transducer arm that extends from the readout head down into the water (making it particularly useful for ice fishing). Unextended, it’s 321/2 inches long and must be carried apart from other gear. The FishEasy is boxy and bulky (thanks in part to its battery requirements) and weighs 5 pounds. The 2-pound Piranha has a low-profile design and can be stowed inside a soft tackle bag with ease.

Extras
If you will use your portable sonar often, consider a unit with extra features. I think a temperature sensor is the most important one, although this may mean getting a different transducer. The Piranha and the Fishin’ Buddy both include a temperature sensor. It’s optional on the FishEasy (as is a speed gauge). The Buddy is equipped with a side-finding function, which is highly maneuverable based on the way you turn the head of the unit. But because I have a crisis in confidence when it comes to side-viewing sonar (I placed fish 6 feet in front of this unit and didn’t get a reading), I’m not excited about this feature.

Finally, I also prefer sonar with an autosave feature, which retains screen options and settings when you power off and returns to the same screen when you power on. The Buddy remembers previous settings, the FishEasy remembers most (not zoom), and the Piranha remembers only the backlight setting.