Aftermarket additions that turn a good sportsman's vehicle into a great one. 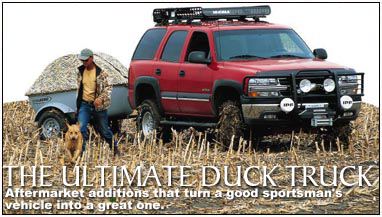 Direct from the factory, the modern sport utility is a product of compromise. These four-wheel-drive vehicles must be easy to drive, comfortable enough to appeal to a wide range of people, and priced competitively. The formula has been amazingly successful over the years, but that doesn’t mean that sport utilities are perfect-particularly for hunters and fishermen who require specialized performance in areas such as ground clearance, suspension, storage capacity, and auxiliary lighting. Upgrading with aftermarket products is the only recourse.

An excellent case in point is a 2000 Chevy Tahoe owned by Field & Stream contributing editor Peter Mathiesen. A Midwestern waterfowl hunter, Mathiesen logs a couple of thousand miles every season chasing waterfowl throughout the heart of the Central Flyway. He originally bought the Tahoe (with the Z71 package, which has offroad shocks, skid plates, and a limited-slip differential) for its people-carrying ability, lockable storage area, and short wheelbase for maneuverability on tight offroad trails. But after one season afield, Mathiesen realized his stock truck came up short in some key areas. So he asked several aftermarket-product manufacturers to help him improve the performance of his truck. Here are the results.

Suspension
“The Z71 offroad package is one of the better factory offroad packages,” Mathiesen says. “But I needed more ground clearance to keep the frame up and away from muddy ruts in cornfields and the limestone rocks so common in the Ozarks.”

Storage Capacity
Though the Tahoe claims a total of 108 cubic inches of storage space, the figure shrinks to 63 cubic inches when the rear seats are in use. To expand storage capacity, Mathiesen added a Yakima Mega Load Warrior roof rack and extender, in which he stored cumbersome gear bags and coolers. For even more storage space, he added an Aero Trailer from Let’s Go Aero. This lightweight, aerodynamic trailer has 11 inches of ground clearance and a tough suspension so it can go offroad. And it can tote a whole lot of gear. “I can carry seven bags of duck decoys and still have room for goose shells,” Mathiesen says. “And there’s room for more. Plus, when you consider that duck hunters seem to wallow in mud, it’s a great place to put all the dirty stuff so the interior of my truck stays clean.” The trailer even has a drain plug, which makes cleanup a snap.

Auxiliary Lights
Hunters often drive in a netherworld. Trips to and from a duck blind or deer stand are typically made in ink-black conditions; bad weather doesn’t help the situation. Replacing the stock front bulbs with IPF bulbs improved road vision, but as Mathiesen says, “At 4 a.m. in a muddy field when you’re setting up decoys, you need something more.” So we also installed four IPF high-intensity auxiliary lights. “On flat ground with no fog, you can see for over a mile.”

In the rear we installed a pair of IPF 800 MSR auxiliary lights, fitted inside the frame of the roof rack so a low-hanging tree limb won’t snatch them. These ease loading and unloading of the trailer in the dark, and help light the area behind the truck when driving in reverse. To complete our total lighting package, we installed IPF backup lights (each controlled by aa dash-mounted switch) that illuminate the side of the vehicle.

That many lights can drain a vehicle’s stock battery. To compensate we went with an Optima dual battery system from Summit Racing. The batteries are specially designed to perform in high-vibration situations (like offroad driving). We also added a Painless Wiring dual battery current control system, which isolates the primary battery from the rest of the electrical system and ensures that you’ll have enough battery power to start the engine.

Performance
In most cases, when you opt for more power, you’ll pay a penalty in fuel consumption. Our power enhancements didn’t. The addition of a K&N; Filtercharger air filter and a DynoMax exhaust system helped improve airflow into and out of the engine (for more power) without increasing fuel use.

But the biggest power boost came from the addition of a Superchip programmable computer. The programmer has multiple custom settings that give several options for increasing overall performance. In addition, the program lets the driver change the settings en route to allow for varying driving conditions. The Tahoe achieved a 30 percent gain in horsepower without compromising fuel economy.

“Building the truck was a 100-hour labor of love for me,” says Mathiesen, “and a significant investment. But this truck is perfect for my particular hunting style. And knowing that I’ll never have to go find a farmer with a tractor when I’m stuck in the middle of a Mississippi bottom is priceless peace of mind.”