Books and Comments: Learn From the Masters 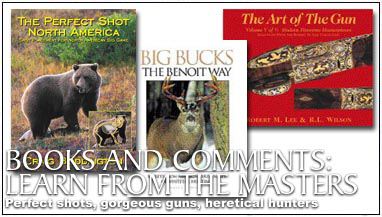 Hunting and not seeing game is not the worst thing that can happen to you in the field; the nadir is when you wound an animal and lose it, or wound one and finish it off only after it has suffered for a good long time. Sometimes this happens because of bad luck-the critter moves at the instant you pull the trigger. But most often, it’s the product of bad shooting and not knowing where to shoot.

Enter Craig Boddington, hunter extraordinaire, and Laurie O’Keefe, an illustrator of remarkable attainments. They have produced a book showing just where to hold on all North American big-game species, plus our major predators, plus peccaries and pigs. Whether you want to drop a whitetail deer or a grizzly, this is the place to go.

In addition to Gen. Boddington’s lucid text, Ms. O’Keefe’s illustrations show you animal anatomy in a way you’ve never seen it. Each chapter shows you a color photo of the animal with white dots as the aiming points for heart, lung, and shoulder shots. Next to it is the same photo with an illustration of the entire skeleton, lungs, brain, and heart superimposed.

For some species, such as black bear and whitetail deer, which are commonly hunted from tree stands, you are given a top view as well. For other species, there is only a broadside view, because you had best take this angle or not shoot at all.

All in all, it’s an invaluable book. If you’re thinking of expanding your hunting horizons, consult The Perfect Shot first. You’ll be a better hunter for it.

These two jewel-like miniature volumes complete The Art of the Gun series, wherein Robert M. Lee’s firearm collection-among the world’s finest (if not the finest)-is brought out for the world to marvel at through the photography of David Wesbrook and the commentary of R.L. Wilson.

The guns in these two books combine historical significance, rarity, and beauty. Very few museums contain anything that can match them, much less surpass them. We owe our thanks to Lee and Wilson for giving us a look.

Larry Benoit is patriarch of a New England family of deer hunters that first came to public attention in the early 1970s both for the way they got their bucks and for the animals’ size. Expert woodsmen, the Benoits find a track and follow it, often at a trot, until they see antlers, and their ability to regularly bring in bucks that could double nicely as draft horses is nothing short of uncanny.

And they do it without scents, elaborate camouflage (green- and- black-checked wool is standard uniform), night vision, GPS, hydration systems, cameras that you strap to trees to record deer activity, laser rangefinders, calls, tree stands, or computers that calculate a buck’s B&C; score.

Their guns are even more heretical. To a man, the Benoit family shoots Remington pumps-760s and 7600s-in unglamorous calibers like .308 and .30/06. And they don’t use scopes! Instead, they rely on big rear peep sights and shoot at close range. With such a poor attitude toward equipment, how do they manage to put any meat in the locker?

Big Bucks shows exactly how they do it, and in detaiil. The Benoits’ tactics may not work in much of the country, because they are tailored to the North Woods and a whitetail population that is comparatively small. But this book is so filled with common sense, good ideas, and sound advice that it should be a part of every serious deer hunter’s library.