How to find that underwater hump from 100 feet away. 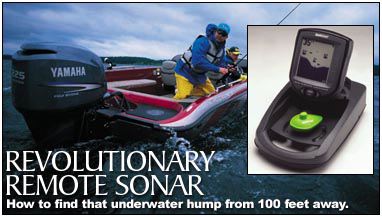 Although many new products are introduced every year in the fishing tackle industry–and often are touted as “revolutionary”–it is rare that something new stands right out as a great idea, a product with excellent potential. So it is with Humminbird’s new Smartcast Wireless Fishfinder remote fishing sonar, which _deserves the term.

Smartcast is designed to be used by stationary anglers–on the bank, dock, pontoon boat, etc.–to determine water depths at distances up to 100 feet away. It features a portable, lightweight conventional display unit (Humminbird calls it the RF10 Mobile Station) and a remote sonar sensor, which relays information through wireless communication. And it achieves this without requiring a 300-page instruction manual to understand how to operate it.

The remote sensor is a lightweight plastic device about the size of a large float. It contains a tiny sonar transducer and a tiny transmitter. Attach it to your fishing line and cast out. It activates when wet and is self-righting, so it always sits in the proper position to allow the transducer to read directly beneath it. After a moment or two, it sends depth information to the screen. You can reel the sensor a few feet closer and almost instantly get the depth at the new location.

Smartcast works with the sensor up to 100 feet away from the receiving station. A highly visible fluorescent green, the sensor contains a nonreplaceable battery that provides up to 400 hours of use. When that battery dies, you replace the sensor. The screen resolution is 128 vertical by 64 horizontal pixels; it runs on eight AA batteries. The display has two-channel capability so that an optional second sensor can be used in the same area at the same time. It also features one-touch operation and a backlight for nighttime reading. You can attach a small lightstick to the sensor for night fishing. You can even use the sensor as a float, though a pretty expensive one should you lose it.

I tested the system this past winter and found that I could easily cast the sensor out to its effective range from shore, dock, bank, or boat. It readily communicates with the station, provided that there is a direct line of sight between them–it won’t read around a boathouse, for example. It’s touted to read depths down to 100 feet, although the deepest that I have yet employed it is 30 feet. I was very impressed and think that the Smartcast may be useful not just for anglers fishing from the shore, dock, or pier but also for some boaters, including people who fish out of canoes and kayaks. If you change locations frequently, you can keep the sensor attached to a spare rod so that you can use it at any time.

One minor drawback is that the sensor does not read well while it’s in motion. You need to let it rest momentarily over any spot you want to read. When I first tried it, I immediately wanted to hook it to a planer board to get depth information for off-to-the-side trolling. Think of how cool that would be for trout and salmon trolling and for river fishing. And I also thought about using it in the surf to gauge depth beyond breaking waves. But those applications are not presently viable. It also doesn’t measure water temperature. I predict that in the future, there will be more sophisticated units that will offer more advanced sport-fishing sonar features.

Nevertheless, the Smartcast system does provide real-time information about many places that you might fish. And by surveying an area before fishing, you can study it well and fish it more capably.

The suggested retail price (which includes the display and one sensor) is $169. A second or replacement sensor costs $20. For more information, contact Humminbird, 334-687-6613; www.humminbird.com.