Here's the news: You don't have to be Joe Millionaire to buy first-class glass. 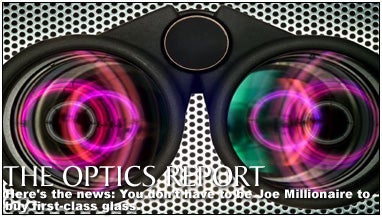 Not everyone is a fan of the global economy. But if you’re in the market for some optics, international trade is in your favor.

German glassware was long considered the pinnacle of the optics world, but the rest of the market has caught up. Most Euro optics are still very good, but high worker wages, rather than quality alone, account for much of their price. Consequently German companies are starting to piece out work to other countries with lower wage scales. The Japanese are doing the same in the Pacific Rim. Toss in some very fine U.S. optics, and you’ve got a lot of great affordable glass out there.

This group of binoculars and scopes (which were hammered in three months of hard testing) is not an exhaustive list, but it’s a solid selection of domestic and foreign-made instruments from the reasonably priced to the very expensive.

Op-Education
Before we get started, here’s a short lesson in optical specifications.

The optical size of any scope or binocular consists of two numbers: the power, or magnification, generally expressed as a number next to a capital X (a 10X scope magnifies 10 times); and the diameter of the objective (front) lens, given in millimeters. Thus, a 6X x 42mm scope magnifies a given object six times, and its objective lens has a 42mm diameter. (These specifications are often further abbreviated, e.g., to 6×42.)

In order to give you a bright image, the size of the objective lens should be at least four times the degree of magnification. Under this guideline, an 8X binocular should have lenses of at least 32mm. But in an imperfect universe this isn’t always possible. Big lenses equal lots of weight, and you may decide that lightness is preferable to brightness.

Scope Shakedown
The scopes listed here passed six crucial tests: 1. Measurement of eye relief (less than 3 inches flunked). 2. Dunk test (dunking in warm water with caps off; if the scope bubbled, it failed). 3. Windage adjustment (10 clicks right, up, left, and then down should put the reticle where it started). 4. Observation for parallax (the reticle should not move when you move your head). 5. Sufficient brightness (clarity while aiming at night at an optical chart placed 25 yards from a 100-watt bulb). 6. Shooting test (all scopes over $250 were kicked by 20 rounds from a .300 magnum).