"After reading all the essays submitted for the Field & Stream Young Writers Contest, I now know what Mrs. Snowden, my 12th-grade Advanced Composition teacher, had to go through when she read my essays..." 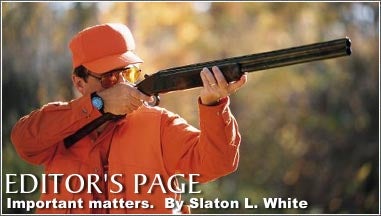 After reading all the essays submitted for the Field & Stream Young Writers Contest, I now know what Mrs. Snowden, my 12th-grade Advanced Composition teacher, had to go through when she read my essays. (She handed my first composition back to me with a red F at the top and the admonition: “You and I both know this is baloney.”) Believe me, I left that class a much better writer.

Fortunately, the vast majority of entries for our contest were very good; so good, in fact, the editors of Field & Stream deadlocked on two entries. As a result, we’re awarding two prizes. Congratulations to Seth Bichler, 16, of Rice Lake, Wisconsin; and Alyssa Franklin, 16, of North Merrick, New York. Each will receive a check for $500. You can read the winning essays on page 41. You can also read a selection of terrific quotes from some of the other essays on page 44.

Though the observations and emotions expressed in the essays range widely, one clear fact emerges: The sooner parents (or other family members) introduce a child to the outdoors, the better. It’s a crucial part of making a new hunter or angler. And though fathers were most often mentioned, moms and grandparents also helped. In one case, a young man admitted that the “real hunter in our family is my aunt.”

Casey Usher, from Rio Lindo, California, related that his father “did not waste any time introducing me into the world of fishing. Hanging above my crib was a carousel of spinnerbaits that my dad handcrafted himself.” Michael Maier, of Westerville, Ohio, wrote that “when the doctor handed me to my dad in the delivery room, his first words were, Â¿Â¿Â¿My fishing buddy!'”

As you might expect, a lot of the entries were from young men. But we also received heavy participation from young women; in fact, nearly one-quarter of the entries were from girls. In many cases, the observations made by them were sharper and funnier than those of their male counterparts. Just as clearly, these young women benefited immensely from the full support of their fathers. So, if you’re the father of a daughter, know this: She wants you to take her hunting and fishing.

Finally, many of the essays were, in reality, thank-you notes to the fathers who took the trouble to introduce a kid to the outdoors. Here’s what Tyler Eckel of Wheaton, Illinois, told us about his father: “He showed me that I was important to him: more important than covering ground at a quicker pace, more important than friends he could have hunted with, and more important than the chance of getting a nice shot at game when I needed to relieve myself. He lived out his love for me by taking me hunting.”