A Beast is Born 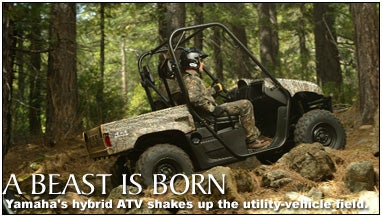 There’s a new ATV in town, and it just might change the way outdoorsmen think about these vehicles. Yamaha’s two-passenger 660 Rhino 4×4, which debuts in this month (see www.yamaha-motor.com), is the newest entry in a new category of “hybrid ATVs”-machines that will haul two people, carry loads of gear, and eat up the offroad trail.

There’s a definite need for such a machine. The past decade has seen numerous utility vehicles that were great for getting across the farm but struggled in demanding offroad conditions and distance drives that hunters require. Some of these vehicles were mostly glorified four-wheel-drive golf carts and lawn tractors that fell short when the hills got rocky and holes turned to mud. Others proved capable for heavy chores with improved safety features, yet lacked serious trail worthiness. The Rhino, though, will carry the load and go the distance.

The driver’s seating area resembles that of a truck. A steering wheel replaces the usual ATV handlebars, and there are gas and brake pedals. The seats are contoured and padded and have shoulder-mounted safety belts, steel grab bars, and headrests. It looks brawny, and it is.

Power and Ride The Rhino’s power-plant pedigree is the trail-proven 660cc engine (from Yamaha’s Grizzly, its biggest ATV) and automatic transmission mounted on a new frame. The vehicle has a fully independent front and rear suspension and, at 12.1 inches, the highest ground clearance among the ATV hybrids. In back, the Rhino has a 400-pound-capacity steel dump bed with a plastic tailgate. It manually operates via a driver’s-side lever and is fairly easy to tilt up.

The four-wheel-drive system has an on-the-fly, one-touch electronic transfer case that locks the front differential. When driving in standard four-wheel-drive, the differential is in limited slip, allowing the front wheels to steer more comfortably on hard road surfaces. The 660 platform is also capable of automatic downhill engine braking, which lets you focus on steering and helps keep you under control in rough, steep terrain.

The Rhino’s wheelbase is 25 inches longer and the wheels are 9 inches wider than the Grizzly’s, giving it a substantially broader stance. The wheel travel in the front is the same as on the Grizzly, but the rear wheels travel 2.2 inches less, slightly limiting the Rhino’s performance in extreme conditions. These differences allow a Rhino towing a 1,200-pound load to go just about anywhere a Grizzly can go. It has a full-length skid plate and a 2-inch rear receiver, so you can use the same towing receiver as on your truck.

We foresee just one problem: In a two-seater that’s this much fun, riders will often fight for control of the wheel.