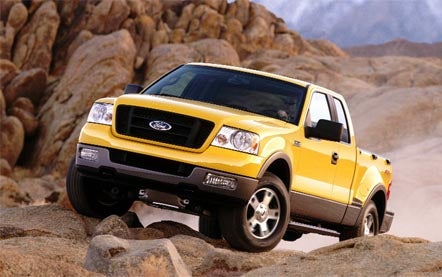 For decades, pickups were heavy on function, light on comfort. That has changed. Today’s trucks are full-feature, full-comfort vehicles that appeal to a wide spectrum of buyers. But beneath the plush interiors and flashy styling, hunters and fishermen can still find trail-running, load-carrying, and trailer-towing capability. The following three all-new 2004 models exemplify that trend.

**FORD F-150 **
The F-150 model has led sales of full-size pickups for more than 25 years. Based on what I’ve seen, the Ford truck should continue its sales dominance.

The 2004 F-150 looks more angular than the truck it replaces (the ’97 redesign was often criticized as “too soft”). A new stiff suspension improves ride and handling, but the big change is the innovative deployment of the rear shock absorbers. Ford engineers moved the shocks outboard of the leaf springs-an industry first-to help tame the ride on rough surfaces, especially washboard roads. New, more precise ring-and-pinion steering also helps deliver a superior handling experience. The result? Instead of a teeth-rattling ride on rough terrain, the truck just seems to glide over the surface.

To fit more gear in the cargo box, engineers raised the box height by 2 inches-a great idea, though drivers of less than average height might have trouble reaching into the bed. The new tailgate, however, is easier to use, thanks to an internal torsion bar that lessens the muscle needed for opening and closing.

The F-150 rides on larger wheels and tires (see chart) to accommodate larger disc brakes. “This thing will move,” a Ford engineer told me. “We wanted to make sure it will stop, too.” The truck stopped straight and smoothly when I was towing a large boat during my test drive. The four-wheel disc brakes do the job with no mushy pedal feel.

Base-level XL models feature a vinyl-cloth combo and rugged floor mats. Though billed as an interior that “you can hose out,” it doesn’t look cheap. Uplevel versions are also available, as is an optional modular rail system on the headliner that lets you customize the interior storage space.

Ford is offering a variety of body styles and cab configurations. You can choose between three cabs (regular, SuperCab, and SuperCrew), three cargo box lengths (51/2, 61/2, and 8 feet), two box styles (Styleside and Flareside), and five trim levels. The F-150 will also be available in two- and four-wheel-drive versions.

The base engine is a 4.6-liter V-8 (231 horsepower; 293 foot-pounds of torque); optional is a new three-valve 5.4-liter V-8 (300 hp; 365 foot-pounds of torque). The latter configuration was developed to help the engine deliver more power at low speeds-a critical need for sportsmen who go offroad or tow. Though the engine delivers peak torque at a relatively high 3,750 rpm, it cranks out five-sixths of the total at only 1,000 rpm-ideal for trail climbing and trailering. Even when I was towing a large boat, the truck accelerated swiftly. Tow rating: 9,500 pounds. MSRP: $19,920Â¿Â¿Â¿$36,365.

Chevrolet Colorado
Chevrolet’s S-10 compact pickup (and its GMC versions, the S-15 and Sonoma) has had a long and successful run. For 2004, GM will end the line after 22 years and offer an all-new small truck-the Chevy Colorado. The GMC version will be called Canyon.

The Colorado is built on a stiffer suspension for better ride and handling than its predecessor. The new rack-and-pinion steering also helps improve the driving experience, even offroad.

It will come in two- and four-wheel-drive versions, in regular, extended, and crew cab configurations. Hunters and fishermen will most likely be attracted to the Z71 offroad package, which includes a special suspension, standard locking differential, higher ride height, and rugged tires.

**Nissan Titan **
Though successful in the compact pickup market, Japanese manufacturers haven’t been strong sales competitors when it comes to the big trucks. But Nissan hopes its new full-size Titan will attract what the company calls “Modern Truck Guys,” i.e., younger buyers willing to switch brands.

The Titan uses a single powertrain combo: a 5.6-liter V-8 (300 hp; 375 foot-pounds of torque) and a five-speed automatic. The engine and tow rating alone put the truck into the full-size arena. Tow rating: 9,400 pounds. MSRP was not available at press time, but the company expects prices to start at $25,000.