Old fishing stuff used to be just that. Now to many people, it looks like dollars. 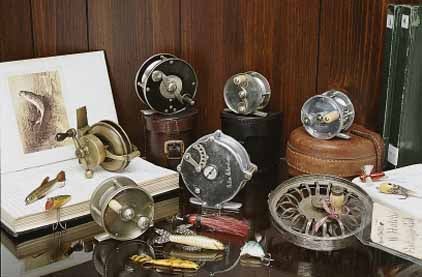 The publicity surrounding such sales has been enormous, and the result has been a major gold rush as sportsmen have ransacked their own barns and basements, looking for treasure in dusty tackle boxes, rod cases, and long-forgotten racks of reels. The first question on everybody’s lips when they uncover an old rod, reel, or lure is “What’s it worth?”

Reducing the rich heritage of angling to a frenzy of dollar signs is truly tasteless. There. I’ve said it, knowing that some will be offended. On the other hand, it’s the way things have played out in popular culture. And whether you’re an interested, would-be historian or merely a cash-and-carrion feeder working the flea markets, there are some things about old fishing tackle you need to know.

Factors of Value
The large sums paid for a very few old tackle items have been enormously misleading. “Many people hear about those high prices and assume all old lures are worth that kind of money, which, of course, they’re not,” says Phil White, a veteran tackle collector from southern Idaho. Scarcity, he notes, is part of the equation. “Some lures have actually declined in value. Early collector prices for the Heddon Luny Frog, a wooden bass plug, were around $500 when nobody really knew how many were still out there. More and more of them came out of the woodwork, and the usual price is down to around $200 or $300.”

That, by the way, is for examples in pristine condition. The vast majority of old wooden lures are chipped, chewed, peeling, or otherwise damaged and worth no more than a few dollars each.

The same rules are true of old reels. Ed Hewitt’s are a good illustration of what appeals to serious collectors. A nationally prominent trout-fishing writer in the 1940s, Hewitt, late in his life, made about 24 jewel-like fly reels (no one knows exactly how many) that he gave to friends. It was his notoriety and historical significance, plus the reels’ quality and scarcity, that led to the recent sale of one for $12,000. That beat-up old Pflueger Medalist that belonged to your dad, on the other hand, was made by the tens of thousands and wasn’t a high-grade piece of equipment when new. Its sentimental value to you should be far greater than the $10 it might fetch at a flea market.

Jim Brown is a retired Connecticut librarian who over the years has assembled a fabulous sampling of antique and collectible reels, including a Hewitt. When we spoke recently, he’d just returned from tiger fishing in Africa, the kind of trip he has sometimes financed by carefully trading in old tackle. “Some items have evolved as legitimate, investment-grade antiques,” he notes, “but you’ve really got to know what you’re doing or you’ll get burned.”

The moral is simple: Knowledge is everything. You speculate in old tackle at your peril.

First Steps
So you’ve pulled some old fishing tackle out of the basement. Now what? Hopefully, there will be a legible maker’s mark or label on the object that will enable you to find out more.

The easiest route is to scan or search the listings on eBay. On any given day, there may be 10,000 separate listings in the “fishing: vintage” category. Not all of the items are accurately described, and there’s a lot of junk. But there are also many collectors who post items for sale complete with photographs, which are great references.

Whatever you do, don’t throw something away before you’re sure it’s worthless. “A lack of knowledge among the general public iis sending the heritage of angling to the dump,” says Southern California lure collector Rick Edmisten, who explains that it’s actually fairly common for a widow to send her late husband’s tackle box out with the trash. The coauthor of the book Fishing Lure Collectibles (Collector Books, $29.95), Edmisten urges people to take simple pictures of whatever they find and to start asking questions. Contacting one of the clubs specializing in old tackle (see sidebar) is a good start, he says, and will usually bring a response.

Be aware, too, that there’s a seamy side to the whole business of antique tackle. Most dealers and collectors are scrupulously honest and fair, but some are not. There are now counterfeits in circulation of some older wooden plugs, as well as reels. And there are “repaints,” which are beat-up old wooden lures that have been newly painted to con the unwary. The really nasty sort will also prey upon your ignorance, offering you what seems like a great price for the old boxed lure you found and then immediately selling it themselves for many times what they paid you.

Finally, there’s an estate issue that all sportsmen should take into account. More than once I’ve witnessed old-tackle dealers gather like vultures around a black-shrouded doorstep before the poor fisherman’s body was cold. The smart course is to make a list of things for your family with their approximate values, and to keep it with your important papers.

I’ve often wished that antique tackle was worthless, which would make all that neat old stuff easier to enjoy. Over the years, I’ve owned several bamboo fly rods built by Jim Payne, perhaps the preeminent American rod maker shortly after World War II. I fished with them a few times, enjoying their tradition, craftsmanship, and superb casting qualities. But after a while I sold them all. The thought of stumbling over a rock while carrying a $3,500 stick was more than I could handle.