Our shooting editor strikes gold at the SHOT Show. 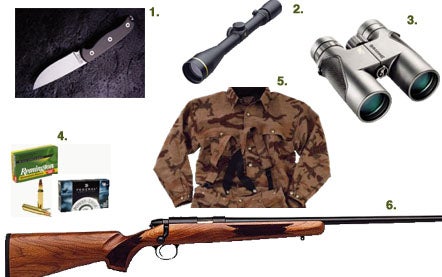 **1. Ontario Knives TAK-1 **
Though it’s heavy and ugly, a nuclear blast probably wouldn’t damage this knife. The TAK-1 is made for military and survival use but doubles in spades as an ultratough hunting knife. Its 41/4-inch blade comes in either bead-blasted D-2 steel (shown here) or phosphated 1095 carbon tool steel (either blade can come with a serrated edge). The handles are linen or canvas Micarta, held in place by stainless-steel screws. People with big hands will grow faint with joy when they grasp this sucker. _$86¿¿¿$92, depending on the edge; 800-222-5233; www.ontarioknife.com _

**2. Leupold VX-III Scopes **
Leupold’s Vari-X III line was so successful that it lasted for 30 years. But time and optics wait for no man, and so comes the new VX-III series, which incorporates major improvements. Among these are a new and radically upgraded lens system, finger-adjustable windage and elevation, and fast-focus ocular lenses. Leupold also offers two new range-compensating reticles, one for big game and the other for varmints. Prices remain the same: from $500 to $1,100. How can you top that? www.leupold.com

In an era of horrifying new cartridges that will blast the turret off an M-1 tank, two ammo makers had the same great idea: Let’s make cartridges that kick less. Utilizing low chamber pressures, reduced velocities, and specially modified bullets, Remington and Federal now offer ammo that: (a) is effective; (b) is accurate; (c) can be used with the same 100-yard zero as regular loads; and (d) reduces recoil to a perfectly astonishing degree. _Prices vary. 800-243-9700; www.remington.com. 800-322-2342; www.federalcartridge.com _

5. Weatherby Early-Season Shirt and Trousers
Weatherby woolens are the product of hunters who got into the clothing business, rather than the other way around. Until now this great stuff was for truly cold weather only (I comfortably survived a week at 10-below in Weatherby wool). For ’04, the company has come out with a midweight shirt and cargo pants that are good from 30 to 70 degrees, in High Desert Brown camo._ $150 for the shirt; $160, pants (with suspenders); 805-466-1767; www.weatherby.com _

6. Remington Model 504 .22
The 504 is Remington’s reentry into the premium .22 market and is a very serious rifle indeed. It is a comparatively plain gun with a 20-inch barrel, an adjustable trigger, and semitarget chambering. At 6 pounds, the 504 resembles a shrunken centerfire more than a .22, and the one I have shoots as well as anything out there at any price. $710; 800-243-9700; www.remington.com