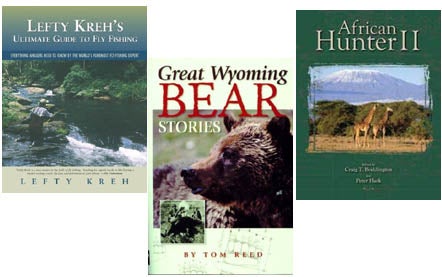 Bears are different. Other animals are interesting, but bears_ resonate_, dating from the time when they ate us as a regular meal to the present, when they eat us only occasionally. That said,_ Bear Stories_ is not the usual collection of gore-spattered encounters with the ursine kind. It is a highly eclectic assortment of interactions that defies classification.

On the whole, humans have not acted any better than the bears. As witness, I give you the chapter in which the now-sainted Saxton Pope and Art Young run amok in Yellowstone Park, killing grizzlies on an assembly-line basis. You will read it with disbelief, and then anger. And there is the case of the young Swiss hiker who traveled in bear country, did everything right-everything-and was killed and eaten by a grizzly. No one knows why.

Tom Reed is a fine writer and reporter, and this is a fine book.

In 1975, a dedicated and financially secure hunter named Jay Mellon published a book called African Hunter, which immediately became the standard reference on the subject. It was a massive work, based on Mellon’s five years of hunting (that’s five years actually spent on safari) in every African country then open to the sport.

African Hunter II will also become an instant classic. It’s edited by Craig Boddington and Peter Flack, and there are more than two dozen other contributors, many of them professional hunters. Hundreds of full-color photos grace the book’s nearly 600 pages, and maps, callouts, and charts are in profusion. You can learn about the animals (where they are and how many), and guns (take only two), and prices, and diseases, and every other conceivable fact there is. Consider it $200 well spent.

Several years ago, looking for new ways to aggravate myself and spend large amounts of money, I took up flyfishing and was flummoxed by it-particularly how to cast. I got all sorts of contradictory advice, none of which helped. And then I got hold of an instructional tape by Lefty Kreh. “Oh,” said I, “that’s how you do it.”

Kreh is no Latin-speaking yuppie. He is a good ol’ boy who has been teaching people how to flyfish for more than 50 years, and he manages to boil things down to where anyone can understand them. Make no mistake, this is a complex sport, but if anyone can make it simple, Lefty can.

In 12 chapters, he manages to cover (thoroughly) just about everything you need to know, and he does it in such a fashion that you don’t need to read anything twice-even if you move your lips while you read. The diagrams, which are numerous, are models of simplicity, and the photos, if grainy, show people smiling over huge fish they have outwitted. This is a nice inspirational note.

All told, if you are looking for one source that will help you master this most elegant-and baffling-of all the fishing sports, here it is.