New in-line designs result in rifles that rival centerfires for dependability and power. 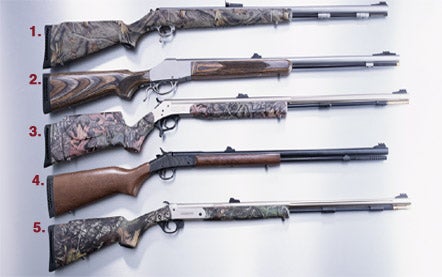 Muzzleloader hunters these days rarely encounter the once common click of a failed blackpowder charge when they pull the trigger on a deer. The in-line revolution begun 20 years ago by the Knight MK-85 put misfires on the endangered species list; the new generation of closed-breech rifles pushes them to the brink of extinction.

The new muzzleloader designs work like this: A closed-breech mechanism snaps shut over the primer to shelter it from the elements, keeping it dry, cozy, and ready to fire the instant the hammer falls. Some versions take their cue from the rolling-block rifles of the 19th century. Others employ break-open actions.

Enclosing the breech lets modern muzzleloaders use 209 shotgun primers in place of the traditional-and anemic-No. 11 percussion cap. The 209s reliably ignite powder charges up to 150 grains, generating near-centerfire muzzle velocities of 2400 fps and more. It’s a brave new blackpowder world. The following are five of the most reliable and hard-hitting closed-breech in-lines.

**1. T/C Omega **
Thompson/Center’s Omega has a pivoting breech that drops open with a pull on the trigger-guard lever. You can then pop a 209 primer into the pocket on the face of the breech plug. A built-in safety mechanism prevents the exposed hammer from striking the firing pin unless the trigger is deliberately pulled all the way to the rear. A recess in the muzzle helps you align saboted bullets properly and start them down the bore quickly. The iron-sighted barrel measures 28 inches and is tapped for scope mounts. The Omega weighs around 7 pounds and comes in black and camo synthetic and laminate stocked versions in both blued and stainless steel. Available in .40 and .50 calibers._ $417 (blued/black synthetic) to $634 (stainless/laminate stock); 603-332-2333; www.tcarms.com_

**2. Knight Revolution **
This new gun looks like a rolling block from the 1800s, but as muzzleloaders go, it’s thoroughly 21st century. Dropping the lever opens the breech to admit a Full Plastic Jacket, Knight’s disposable plastic holder that encases a primer, creating a tight, weatherproof seal. For easy maintenance, the all-stainless-steel trigger assembly drops out with the push of a button and is fully adjustable. The tapered barrel measures 27 inches, and the rifle weighs 7 pounds 14 ounces. In .50 caliber, with a choice of stainless or blued metal, and a laminate, wood, or composite stock. $430 (blued/black composite) to $605 (stainless/laminate); 641-856-2626; www.knightrifles.com

3. CVA Optima Pro 209 Magnum
A flip of the under-lever opens the action of CVA’s break-open Optima Pro for easy priming and de-capping. The fluted barrel measures 29 inches to wring every last bit of velocity out of a 150-grain charge. As a bonus, it’s easy to change the barrels and go with either the hard-hitting .50 caliber or the flat-shooting .45. The Optima Pro weighs 83/4 pounds, measures just over 44 inches, and has a solid synthetic stock. Iron sights are standard, and the barrel is drilled and tapped for scope mounting. Available in blued or nickel-finished metal with a camo or black stock. _$279 (blued/black) to $364 (nickel/camo); extra barrels, $94 (blued) to $109 (nickel); 770-449-4687; www.cva.com _

**4. NEF Sidekick **
Though it won’t win any beauty contests, the Sidekick is a shooter-friendly choice at a rock-bottom price point. It shares the exposed-hammer, break-action design of NEF’s Handi-Rifle centerfires, opening by means of a button next to the hammer. A transfer bar system prevents the gun from firing unless the hammer is fully cocked and the trigger deliberately pulled, meaning it won’t go off when you drop it from your tree stand. The Sidekick comes with five reusable plastic primer carriers that reduce fumbling during capping and uncapping. For an inexpensive rifle, the triggerr pull is quite crisp and clean. With fiber-optic sights and a barrel drilled and tapped for scope bases, the Sidekick comes in .50 caliber in a choice of 24- or 26-inch barrels. $195 (blued/hardwood) or $295 (stainless/synthetic); 978-630-8220; www.hr1871.com

**5. Traditions Pursuit Pro **
Traditions’ newest muzzleloader features a break-open design and an exposed hammer. Two safeties-a hammer transfer bar and a cross-bolt-guard against misfires. Its compact action means the Pursuit Pro can wear a 28-inch barrel and yet the overall length remains a very manageable 44 inches. The Pursuit Pro has steel and fiber-optic open sights and is drilled and tapped for a scope. An ambidextrous spur on the hammer allows left- and right-handers alike to cock it easily when the rifle is scoped. The Pro weighs 81/4 pounds. A lightweight alloy-receiver version, the Pursuit L.T., is just 61/2 pounds. In .50 caliber, with a black or camo synthetic stock and blued or nickel metal. $279¿¿¿$359 (Pro) and $199¿¿¿$279 (L.T.); 860-388-4656; www.traditionsfirearms.com